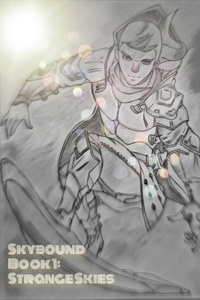 A stranger in strange lands; lost memories; a peculiar world. Here is a story of a youth who found himself stranded somewhere he didn't belong, with fragmented memories of who he was but just enough to realize what's at stake; just enough to help him scrape a semblance of normalcy in a world yet uncharted. And he will stop at nothing to reclaim what is truly his.

A little bit of slow burn

A dash of slice of life here and there

No number crunching though the system is well and truly present

MC grows over time, no zero to immediate hero kinda thing. He has to explore his power.

Erm, English is my third language so, treat me well...pwease? :)

...will give warnings just in case :)

*Review has been revised*

The story starts a little rough, the first two or three chapters feel a little clunky, the grammar itself isn't horrible, but the prose is somewhat off feeling. This improves significantly in the next few chapters leaving us with a thoroughly enjoyable LitRPG with a well-implemented system inspired by Pirateaba's system.

One nitpick is that the way in which he leaves the Dragon which tutors him feels... somewhat unfulfilling. I hope she appears again in a later chapter to at least give us some form of closure.

The author has gone back and done a rewrite of the first 15 chapters, while I haven't read all of the revised chapters I can say that the author has fixed all issues I had with the prologue and as such I am updating my review to 5 stars. Now stop reading this and read the story dammit.

Is this worth a read. Yes.

The beginning ( after the first 2-3 of chapters drag a bit) but the drag in these chapters gives the character a chance to survive.

Survive and pick up abilities that causes him headaches. He isn't op he messes up often and others help bale him out.  He's not an idiot he's not from here, common sense needs redevelopment in some areas.

Style. Good. It's in development though.

Characters? The main has issues, but that mean in context that he feels real and acts like a 18-20 year old lost in another world with partial amnesia.

The secondary characters. Rather good. The first one you meet.... Later in the story it would be nice to see some development. But we'll I get it.

All the other minor characters have at least some depth.

Good Royal road fair. Excellent top of the charts. No but worth your time as is with some edits and practice this author can be very good.