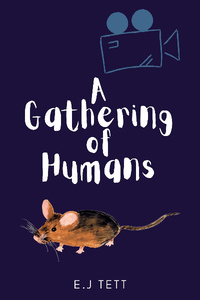 A Gathering of Humans

Delta had returned to the office and sat making the final adjustments to his and Fiddler’s film. He had only been working for a moment when Marley and his camera-rat Dogwood entered the room.

Delta groaned and looked up at the senior reporter. “What is it, Marley?”

Marley made himself comfy in Fiddler’s big chair and looked smugly at Delta. “No Fiddler with you today? Got lost, has he?” He laughed and muttered to Dogwood, “Let’s hope so, eh?”

Delta frowned. “No, he’s just uh, well he’s not here yet.” He fiddled with his camera, wishing Marley would just leave.

“Ah well, let’s hope he decides to show up in time for the awards ceremony this afternoon,” said Marley, standing up. “I want to see the look on his face when he loses the competition to me.”

Marley laughed again and left with Dogwood hurrying after him. Delta narrowed his eyes. “Fiddler will be here,” he muttered. “I know he will.” He grabbed the film and left to go to the awards.

The National Wildlife Film Award ceremony was always an important event in any journalist's calendar. This year it was being held at the Dead Oak Hotel south side of the woodlands. Reporters from every station had turned up for the event, squirrels from Channel 9, common shrews from The ShrewFilm Network, various rodents from the posh World Rodent News and a pawful of mice and rats from Channel 1.5.

Delta hung around the buffet table anxiously as the Boss mixed with other journalists. This was the first time he had attended the awards, having been talked into entering them by Fiddler. He nibbled a celery stick nervously when he was tapped on the shoulder.

Delta spun round and came face to face with Hazel. The pretty mouse smiled at him. “Where’s Fiddler?” she asked. “Not in any trouble I hope?”

“He’ll be here soon,” said Delta. He glanced over her shoulder to where an officious-seeming bank vole was being interviewed. “Who’s that?” he whispered, feeling he should know.

Hazel answered without even turning to look. “That’s Sessile Streambank, owner of the hotel,” she said. “He’ll be presenting the award.”

Delta took a thoughtful bite of the celery stick. “What time does the ceremony start?”

Hazel laughed and put a paw to Delta’s shoulder. “You can tell you’re new at this. Later on each reporter will be asked to hand their film to Sessile Streambank for him to show on the big screen, a panel of judges will be voting for which one they want to win and this will be announced at the end.”

“Fiddler better hurry up and get here,” said Hazel. “The ceremony starts soon.”

Unbeknownst to Delta, Fiddler was in fact already at the Hotel. He had got so far as reception before he had been stopped by security guards and taken to a quiet room away from any unwanted attention.

Fiddler sat at the table and looked round at the three burly hedgehogs. “Look I’ve told you, I’m from Channel 1.5. I’ve a documentary entered for the awards! My camera-rat will be waiting for me – that is if he’s decided to turn up!”

The biggest hedgehog smiled grimly. “If you’re a reporter then where’s your ID tag? It’s meant to be hung around your neck.”

Fiddler sighed. “I don’t have an ID tag because I wasn’t here yesterday to get one. I’ve been working at the human village. Please just go and find the boss of Channel 1.5 and he’ll tell you.”

The hedgehog signaled one of the others to do as Fiddler asked and sat himself opposite the mouse. “You better be telling the truth, young mouse. We don’t like gate crashers here at the Dead Oak.”

Fiddler leant forward and grinned cheekily at the guard. “Do I strike you as a liar, sir? Just wait ‘til the Boss gets here, you’ll be in so much trouble.”

Fiddler’s Boss was led into the room accompanied by the hedgehog. He nodded and smiled. “That’s our Fiddler all right. It’s okay, he’s a reporter.”

Fiddler was allowed to return to the main hall, telling the Boss his madcap tales on the way. Once there he spotted the buffet table, laden with delicious looking food. Hanging around nearby he saw Delta and grinned happily.

Fiddler bounded across to his camera-rat and jumped on his back, ruffling his ears fondly.

Delta shook his head at his over excitable friend's antics and smiled. “Oh dear, Fiddler, sometimes I wonder if you’ll ever calm down.”

From across the room Marley watched through narrow eyes. He turned to Dogwood. “You know what to do?”

“You steal their film, idiot. Then they’ll never beat me. I always win the National Wildlife Film Award. Always.”

Marley watched Fiddler and Delta enjoying themselves and smiled. He’d soon put a stop to that.

Bio: Probably too old and too grumpy. I love dogs, and gardening. And Ninja Turtles.