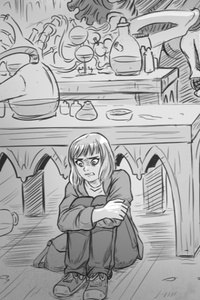 A modern girl in the grimdark world of Warhammer 40.000

Olga, a young Russian girl with a hard past. Fidus Kryptman, an Inquisitor plagued by the weight of his father's shadow. Pulled together through time and space into Ballistic Station XVI, an installation overrun by deadly and mysterious interlopers. Can Olga save the wounded Kryp - and can they survive the horrors of 40k, where the consequence of bravery and survival is often an even worse fate?

T.N. THis is translation of the book by Igor Nikolaev. Please support him here.

In this story Olga, a girl from modern day Russia (or at least from USSR Time) is pulled into the universe of 40k where she must save inquisitor kryptman (Jr.) from a mortal wound.

This story is remarkable for pulling off the following feats:

2) The Author has successfully controlled any exposition urges they have. The story flows well and is rarely, if ever, bogged down by superflous comparisons between 40k and Olga's world. Exposition given is appropriately short and limited - as those making it are pressed for time and with very limited understanding of the larger world

3) Although not done perfectly, the descriptions are illustrative enough that a reader well-verse in 40k can still discern what Olga is seeing from her observations of it. That said, there are times when it fails to get the full nuance across. Still, the work is laudable for treading the line well enough.

4) In the end, this story has the bearings of a competent story. The reason being is that although the plot is "Modern Russian Trapped in 40k", the story itself is very character driven. These characters are well fleshed out, and not just some 1 dimensional characters used as vehicles to make funny comparisons between 40k and modern day Russia.

Also note that the original Author wrote it in Russian, and although I am not cleared if the translator is the same person, the translation is very functional and is as good if not better than many other fan translations of Japanese short novels that are common on the internet. The main weakness is that the translation at times translates figures of speech literally, instead of using an english equivalent. Thus reading is at times awkward, though the actual meaning is usually deducible.

Kryp (which maybe should be translated as "Creep")

This is quite rare fanfiction WH40k story, which is not about so called "bolter-porno" and heroic space marine / inquisition / mechanicus superiority - it's about characters. Young and almost dead Inquisitor and regular "russian redneck" girl facing grim dark future. They are vivid and look real.

The only probem is that some puns were missed or even mistranslated and are lost for an english-speaking readers.