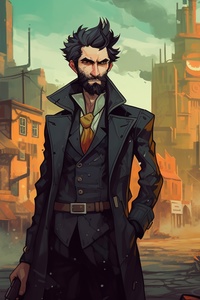 To Cross the Threshold

What would one do, when a star crashes into the Earth? Die, of course!

Except, in Joseph's case, it was all wrong. He met face-to-face with the Light, got the program forced into his brain, and woke up far, far away from his small insignificant hometown, in the ethereal endless void, full of stars and vigour, guns and loot, Daemons and Skills!

From there on out, he got volunteered into the crew of the Morning Star, the pirate ship he was unfortunate enough to stumble upon. With a tree for the Captain, a dragoncat for the Quartermaster, and a human, equal in height and width, as the Cook, he sets sail across the mysterious and hostile Threshold, filled with fierce abominations, rich Ghosts, and patriotic soldiers from the Glorious Metal Empire, all to figure out what the Light has brought upon his Earth that day, and to find his way back home.

Warning - English is not my first language, so I apologize in advance for any inconsistencies and grammar mistakes. Please, do point them out when you find some.

This book is about the slice-of-life-ish lighthearted adventures of Joseph and Co. Just one long bumpy road, inspired by old-school RPGs.

Granted, I haven't read very far in, but I feel I can confidently say... it's fine. There are worse stories out there. This one is fairly imaginative so far. The MC isn't annoying.
The main issues with the story are grammar related. The author (like many new authors) switches between past/present/future tense without realizing it. And at times uses the singular or plural form of a word incorrectly. They don't seem to be fully aware of when to use "a" vs "the" (such as referring to "a cat" when it's been established there is only one cat in the room).
The author also falls into the new-author trap of presuming we know everything about the situation without explaining it fully. Such as why the doctor is nicknamed "Crunchy"; it was explained and I still have no idea why he's called that.
Lastly, I'd suggest to the author (as I suggest to all authors) to hit that "preview" button and read each chapter over once before publishing. There were a few mistakes like "the car jumped wordlessly onto the bed" and "Joseph made a mental node" that probably wouldn't be underlined as wrong by a basic word or grammar checker, but a person can pick out easily.
But for all those flaws, the story seems interesting enough to keep me reading.
Give it a shot!

No real tables in this one but that's alright. Many indents but those were easily removed. Grammar? Posh enough though I had issues with some things. Never saw anything I would be angry at. Wording? Confused me at times but that's likely due to me being more stupid than I should be.

Personality? We going into the first dimensions at some points. I honestly couldn't get behind that. Couldn't decide if it was due to anime inspirations or not or if there was something else. Synopsis mentioned old RPGs so I guess there likely were a few jokes and tropes that I couldn't catch on to. Whatever. 4.5/5 from me.

Space Exploration On A Mysterious Ship

Reviewed at: Chapter II.5 - We Have What For a Captain?!

Space travel on a spaceship. This kinda gives me Guardians of the Galaxy vibes, no cap. It’s pretty interesting with GameLit system elements to it but the focus of the story is on this mysterious ship filled with their crew, as they journey together into the threshold? maybe?

The story starts with some character introductions and the backstory of Joseph. Then the opening chapter ends with a bang! The story is going well so far with the discovery of new crew members, a GameLit System and magical creatures.

I like how the author writes in a way that allows the readers to peek into the internal POV of Joseph. The apt descriptions of the surroundings are less expository as well. This is done beautifully through weaving Joseph’s thoughts into the descriptions. So far so good!

The grammar could do some working with typos and past/present tense. Nonetheless, it’s a solid 4 stars.

The characters are well-defined and relatable. I really like how there are so many unique interesting characters from a talking cat to a rat to a captain tree to many more weird characters. Each with uniquely defining characteristics. None are the same. 5 stars for this! Great job here!

It’s pretty cool so far and I have added this to my followed reads. If you like space exploration on a cruise to who-knows-where, you should give this story a try! Keep it up, Author!

A Bleak and Formless World Marred By Amnesia

Let me preface this review by saying that I loved the story. It needs some TLC, but I will get into that here shortly.

With that being said ... let us begin.

STYLE SCORE: 4.5/5 The style of writing grabs is basic, but grabs you by the collar and shakes you before tossing you into a Judo throw. Its direct, hits hard, and then retreats to give you tehy fiddly bits. I enjoy the style immensly, as it did pull me in and I found myself on the sixth entry before I even realized what had happened.

STORY SCORE: 4/5 The story is a bit hard to follow. Outside of a few fights, and a mystery island, not much has happened so far. We havent gotten a lot of context or world building other than the name of the land, the ship a few characters and that there is a red sun. But bro, airships bro. Thats a new, and saving, grace. I love it, it just needs some TLC.

GRAMMAR SCORE: 4/5 One word: Ouch. There are a lot of little errors in sentances, grammatical faux paus, and errors. Nothing that really detracts from the story, but there were a few times I found myself having to go back and re-read a paragraph to ensure it made sense. The errors stack up after a while, and I was miuldly frustrated by the time I got to the most recent chapter of the fiction.

CHARACTER SCORE: 4/5 This fell a bit flat for me. Joseph seems to be a traumatized man who got isekaied into a new world. That trauma seems to reveal itself in him being dazed, losing connection in reality, or performing violent acts based off of hunting training he recieved from family members. Its hard to connect with him. The other characters seem on the same level as him, and it makes for a bit of a difficult read combined with the grammar issues. The most intersting character by far was Nailuros and Naji. Both of whom have shown far deeper character builds than the MC.

OVERALL SCORE: 4.5/5 I would have rated it a bit lower, but I rounded up. It has great promise. I love the style, like the story, but found the grammar and character development to be the biggest hurdles. Some editing, additional information on backstory and development of characters and their stories would go a long way. Right now, as it stands, its 4.5 stars for me.

First off, this is a fun tale with lots of interesting characters. We have talking cats (the little naji, Ailuros) AND we have cat-like people (such as the quartermaster, Xander).

Joe, the main character, wakes on a "ship" and is a little confused at first. I love stories like this (portal fantasties are my jam) and the tale takes its time letting the reader get to know the crew, which is always fun.

There are lots of fun surprises (mild spoiler alert)--I thought they were on a normal sailing ship (or perhaps a submarine) but that's not the case. It's an airship flying high over Northern Lights. AND NOT ONLY THAT, this is a sci-fi style world with a red sun. The cover makes so much more sense once you realize this fact.

Grammar: English is the author's second language (as in the description) but that didn't stop me from understanding the tale. AND the author made a pretty great song/poem later in the story that's rather clever. Clearly, the author has a pretty good grasp on English. As long as you don't mind mildly awkward wording, you're good to go.

The characters are the highlight - the crew it likeable, and you want to see them sail the sky together (even the weird doctor who wanted to make pockets on someone's flesh, lol)

Overall, if you like the Skies of Arcadia, or a nice slice-of-life portal fantasy, you'll have a good time here!

Reviewed at: Chapter IV.1 - The Last Defender of the Black Island (Beginning)

Style - I shouldn't be saying this but I have some issues with orientation within the story and sometimes I have problems understanding who is talking, how to properly picture the scene, and where we are (except for obvious "we are on The Ship"). The fact this story actually does have quite unique setting focusing greatly on the author's visual imagination doesn't help, the story just breathes that everything contained within should be a very surreal experience, but I can't get it.

This story really needs some pictures. I am forced to leave 4-stars here.

Grammar - English is not my first language, any and all stories will get 5-stars by default.

Story - To Cross the Threshold is actually quite a straightforward story about the guy being transported or uploaded if the first chapter is any indicator, to a very strange, surreal universe and forcibly recruited into the colorful crew of mysterious pirate ships sailing (or floating, I still don't know) into unknown. Its selling point is the distinctiveness of how everything looks, feels, and works. The author certainly had some imagination. A solid 5-star for the idea here, without a doubt, but bring style to 4 for confusion.

This story should really have illustrations, it has difficulty getting its selling point across without some visuals. If it got visuals, then I would certainly marvel at the author's imagination. 5-stars here.

Characters - Characters sadly aren't that interesting to me. They are pirates with little to no patience with a guy who they recruited at gunpoint. " Yarr, matey!" Luckily they don't talk like that, but they do feel like that. Even the most patient and polite of the bunch (which I think is the talking cat) doesn't feel they have something special to them.

The main difference between characters is they are supposed to be quite visually distinctive. I regret to give this category a 4-stars.

Overall, I think this story has a good idea, but it does need stunning visuals to get its point across, which is obviously a difficulty in text format.

I do suggest this story to anyone who seeks something unique though, hence 5-stars overall.