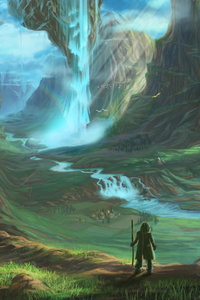 Human as a species has long since joined the Intergalactic Society and expanded to fulfill their role as good-standing members. Technology and society similarly developed until in cycle 745 of the IGS Universe Calendar, the Universe finally attained a sufficient density in ether to awaken the bringer of change, named simply, Ether Law.

Amidst the gargantuan Intergalactic Society (IGS) spanning tens of galaxies, Rune is only a good-standing galactic citizen living a peaceful life on a rural planet with his family, but his heart tells him that this change was something he had waited for, for a long time, and his indecisive slash very careful personality will probably help him.

This is an adventure, so respect the adventurous feelings I’m transmitting.

Chapters are around 3 000 words each.

Update: 1 chapter every day minimum, I have no limit if I feel threatened by addicted readers.

Reviewed at: Chapter 1: Waking Up

To be fair, I started binging the first 10 chapters when they were first released, and was shocked to see the fic gone.

Style- Short and succinct prose that is easy to understand

Grammar-One of the better fictions I've read, haven't seen an error yet. If there was, it was so either consistent with the story or so small I couldn't recognize it.

Character- While not being the most characterized, the characters fit nicely into the world created by the author, if maybe being a little huge in cosmic scale. Each side character makes sense to the story and  hints to having a life outside the main character's

Story-while It seems like a standard *drop in the fansty* story, it quickly sets itself apart by having a slow apocalypse, apocalyptic at all. Life goes on and everyone explores the new system; the Etheric Law. First 10 chapters or so focus on the tutorial, which notably doesn't involve killing monsters and fighting for survival.

Interesting Read so far, Give it a try

*the rest is for word count quota, RELEASE ME FROM MY CHAINS ADMIN

*Get rid of rhe 200 word advance review criteria. I can right a good review in just a hundred words and if I like anything else that's just more words

Are You Not Entertained?

Reviewed at: Chapter 50: Flock of Birds and Bears

Slow and Steady. Not fast paced, 95% solo MC POV. LitRPG elements are there, but due to the S&S nature of story, not overbearing. No Blue Screens.

Not a lot of dialogue, mostly inner monologue. This is mostly a theory crafting, solo exploration grind as a System happens and one persons goal to explore and understand begins. You could almost call this a Min/Max LitRPG thought project. Group elements happening more at 40-50 onward chapters.

At 50 chapter mark, its finally getting to the meat of it all, the good stuff. I'd call the preceeding chapters the Tutorial.

Lots of world building, more so happening in the later 40-50 chapters.

One could note that some of the earlier writing could be called overly wordy and confusing as its describing the System and world building. But as long as thats not too much of a hang up to you, skim it, as its either not relevant or will be explained in normal speak later on via the MC.

I do like that the author takes the time to show how far reaching and broad something like this would be, whilst not really affecting our MC at all. Some could call that unnecessary writing, but i think overall it adds to the depth and scale of something this size.

A very chill story with a future.

If you are looking for something to read that's litrpg-ish and chill,without having to worry about enemies and big bad guys ruining everything (i sure am cuz there are enough  stories full of drama and stress and overarching plot,those are good too but sometimes u need to sit back,relax and just read) this is your story. 8 chapters in and i LOVE IT,it's exactly what i didnt know i was looking for for the past year.

Edit《》after reading more of it,most of the concerns of people were answered

Way Too Much World Building

I'd like to first point out that I appreciate the effort you clearly put in for the world building, you clearly spent a lot of time on it, and my following criticisms are meant as constructive criticism. I dont want you overly stressing about what i'm about to write, but recognize shortcomings. Writing is super hard, it take a ton of time, and the only way to get better is to write more. So dont expect to create masterpieces every time, but use your stories as practice for one in the future.

That being said, you need a lot more than world building to make an entertaining story, but it takes up almost the entirety of the story.

The RPG system itself is overly simple and doesn't really allow itself to do anything interesting. You have basic core fundamental skills, and anything you can do is basically just applications of these fundamental skills. This makes everyone incredibly generic, with very little to make anyone unique in any way besides specializations and classes, but even those dont seem to offer anything interesting are also from a very limited and generic pool.

The MC's attitude is also boring being a cautious slow and steady type. This is a personality for a side character, not an MC. In fact, the side characters are more interesting than the MC. This is twice as bad since so much of the story is spent on world-building that very little true character building even happens in the first place.

There's also a shocking lack of conflict in the story whatsoever. There's no antagonist, there's no risk of failure, you can't even ruin your build, there's no real risk of death in the tutorial, and since there's no character building, I wouldn't even care if people did die. And to stress the severity of this point, conflict is the absolute core of any story, it's fundamental. You're missing the very heart of what a story is.

There's also no real plot to speak of. You've basically only established the system the world runs in, and that's kind of it.

The problem here is you have a super slow burn story and nothing compelling the reader to read the next update. The first 50 chapters are just the tutorial, and it felt like a tutorial in the worst ways possible.

There's a lot of potential here though, and I think once you start to recognize the parts that are missing, you're going to see massive progress in your writing.

Reviewed at: Chapter 14: Duke Of Andromeda

Let's start with nitpicking. The characters are somewhat bland. The world is stupidly unrealistic by having all people or next to all people have the same opinion about things such as a certain group of people for example. Caution, Paranoia, Panic are all a non-issue because everyone accepts their reality as they know it becoming no more than a fleeting dream instantly and allowing the government all the time they wish to take to make an announcement.

Further is grammar is readable, but bad. So prepare for some riddle me this. This is slightly exacerbated by constantly explaining the MC in such an odd and defensive way that it always kind of boils down to: 'because I the author said so'.

I also, find the interaction between the MC and others to be off. In that, they are supposedly an introvert yet they ditch their long-standing friends in a heartbeat because that is how long it took for new friends to be introduced.

But all that is overshadowed by the interesting story being told. Showing just how much potential in this fiction lies. Sadly much of it is as yet untapped but that which can be seen is still well worth the time.

An interesting lit-rpg in a sci-fi ambient, the intergalattic society is a normal organized and socialy pacefull society with almost all normal person, apart the rululu. There aren't war, the economic is stable, they don't have the panacea for all medical condiction and there are some little problem but all for all is a good place.

When the Ether law start the society DON'T crush, people DON'T panic like headless chicken, moron DOESN'T become psycopatic powermonger whith mass extintion ability, just some minor nuisance and more and foremost the Ether law DOESN'T start the apocalipse. A welcome change from the usual xianxia/litrpg where you find 10 wannaby thug/arrogant young master/mutant monster every turn of the street and the MC go from zero to Goku in less than 20 chapter even if he was a bullied nerd before.

This is a tranquil pace novel where the MC explore the new universe at a resonable pace, with good and not good thing, interestin is the universe building progression not too fast or slow.

I hope to see it in the trending soon

Reviewed at: Chapter 19: Beginner To Amateur

Review Posted as of chapter 19

Most of my review will contain spoilers of the first 19 chapters.

The story so far at least is very very slow paced. With that I mean as of chapter 19 nothing has really happened. The adventorous spirit of the story so far has manifested in two absolute side characters, an adventurer guild and absolutely nothing that is linked to our main character Rune.

As for our MC he is so far very plain and at times outright boring. He takes the slow and steady approach of farming slowly instead of going for the more risky strategies. So far no real lucky brakes for him either.

The system itself is decent enough even though slogging through what felt like 3 chapters of the system announcing itself and then seemingly discussing with itself felt more like a chore to me. After that it feels like a well thought out system though in terms of stats and function (no system created abilities or skills so far I believe).

Overall I can say that so far the adventurous spirit is sorely missing. The author warns in the beginning that it is a slow burn but 19 chapters with very little besides farming, spreadsheets and training is too long for me.

Reviewed at: Chapter 25: Back Home

OK story, but way too boring and slow. There is no suspense at all, no villain, no hardship, nothing.

MC has no real character, some side characters are more defined than him. The dude has a family, 2 sisters and 2 brothers and just gets up and leaves without a word even though he could have done his solo training near his home planet ? Wtf man.

The political situation in this book is an utopia, absolutely unrealistic.

The author spends way to long with setting everything up. Why don't you let your characters explore and experience the stuff themselves instead of reading it on a forum?

Grammar is fine but there are a few mistakes here and there, some chapters have are worse. I'd rate grammar 3.5/5*

I can't recommend to read this as it is right now. It's just too boring.