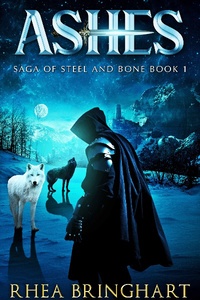 I have seen darkness. I have lived it.

Can a king truly rise from the ashes of a broken soul?

Roland is a half-breed abomination. His home is neither with the Shifters or the Humans, and nothing but the vilest of overlords accepted him as a slave.

His past defined him, his present seemed futile, and his future seemed hopeless.

Until he escaped his assassin overlords and came to meet a small family who adopted him as their own. They forced him to look past what he’d come to expect in humans; forced him to face what he’d become. They showed him a glimpse of happiness for the first time in his life.

But tragedy is never far. The Empire steals his first glimpse of peace, putting him on a collision course of past, present, and future that will take him to a small town needing a hero and vast mountains hiding deadly secrets and fire-breathing creatures. It's a race against time to rescue those he loves... before they, too, become more cold bodies laid at the feet of a heavy-handed Emperor.

His path will take him on the journey of hero and villain, the lines blurred between right and wrong, his hands stained red with the blood of both the guilty and the innocent.

Roland knows one thing. Those who took his family will pay.

He’s coming for them, and Avidon will never be the same.

Ashes is clean werewolf fiction with redemptive and psychological elements. It is the first in a planned trilogy, set in the First of the Four Worlds, Avidon. Book Two, Phoenix, is currently being released on a two to three chapters a week schedule. This tale contains elements of faith, family, and fighting for hope in hopeless situations. There is war: so violence, blood, and gore are common, as are vague references to torture and rape. Dive into Avidon and her sister worlds today for heart-pounding adventure, laughter, and baby dragons. Enjoy!

This is a pretty good one. From the first chapter or two it actually becomes pretty clear that the author put int time to edit the story. No obvious grammar mistakes could be found, style actually flows better than the average, and the character introductions is pretty fun. 5/5 from me.

Reviewed at: Chapter 4, A Time to Act

By and large the only problems I noticed were grammatical, and the tidbit discussed below about italics. The only story issue that stood out was in chapter 1 (see below). These issues are minor at best and did not distract or detract in any meaningful ways.

I like your story, and should time permit I aim to read more. Your style is a nice blend of detail and inner dialogue that, in the vast majority, is very good at showing. It allows me to craft basic mental images of the world, and to ponder what might be otherwise going on around the character. Although I cannot comment too strongly without reading further, which I aim to do if time permits, I like what I’ve read, and think others will too.

Reviewed at: Chapter 7, The Beast

Ashes is a gripping tale of tragedy and revenge. Featuring werewolves. What is there to not love by that pitch alone?

It opens up gripping, with the MC and their family getting caught by "jingoists" because of their abilities. The jingoists are depicted as being cruel and violent; the kind of villains you want to see hurt.

Grammar is on point. Didn't notice anything off.

A definite read for readers into werewolves.

This is a story of revenge...long coming revenge. If you are into the wham-bam type stories, this is probably not for you. But if you want to read something that is expertly written, nay crafted, then this is for you.

Grammar Score: There was nothing jarring that took me out of the story. I read a few other reviews and noticed something about italics, but even if that's not the correct use, I totally understood what the author was doing. Full marks from me.

Style Score: Each paragraph is like a poem, every word clearly selected to paint a picture of what the MC is experiencing at that moment. At times a bit a brevity might be better, but it doesn't detract from getting inside the head of the MC and experiencing what they are.

Story Score: I'm reviewing at chapt 7 I think, and the story has set up to be one of revenge. The world is starting to unfold and we are figuring out what kind of world the MC will have to traverse to exact that revenge. The opening scene is heart wrenching and brutal.

Character score: It's pretty heavily focused on the single MC but he is done so well. The internal dialogue with his wolven self is really really great. The jingoists are also well done, even if not that detailed. There's a really dark cruelty to them that brilliantly crafted by the author.

All in all, this is dark, beautiful, brutal and utterly engrossing work, and I definitely recommend you read it.

Style: Ok, so one thing I noticed here is that the pacing is honestly really great. The main problem I have with most RR works is that even if the story is written well, that it really just goes too fast, and doesn't offer enough explanation that it sort of takes you out of the whole thing. I can safely say, that not only is this not the case here but that there is a real rich language and level of writing here that is quite commendable.

Story: Nice, admittedly I'm not very well versed in the werewolf fiction of things, but even so, I think the story is well done. It's believable and doesn't come off as stupid and the subtle details of worldbuilding left in are great that hint at a grander scope of things or just the concept of there being a reality outside the character's environment.

Grammar: Did not notice any issue, but I also suffer from a case of not being very grammatical at times, but even so, it's really fine!

Character: The main protagonist is great and does a good job of carrying the story while having compelling motivations, definitely not one that's just a self-insert or a one-dimensional being per se. The only issue is that, there isn't any other character that's left a particular impression so far, and the main antagonist which is alluded to time and time again, is just there, I suppose? Though I also have a penchant for very odd characters, so I am weird in that regard to be fair.

Reviewed at: Chapter 11, Can I keep him?

The story follows a werewolf-like individual who is often refered to as "Kursk Scum" or some version of "Kursk." (But his real name is Roland, though he keeps it hidden for the most part)). The MC is no shifter--he's more a Beast with a werewolf like appearance (or straight wolf) when transformed. The MC wants to roam the wilds and be free, but the story cleverly starts with an attack on his home.

Immediately, we're thrown into a world of captivity. The warnings on the tale are accurate! A lot of messed up stuff happens to Roland and his family. For several chapters its a trek to the slave pits, and Roland's captors are vicious and just straight evil.

This is definitely the type of tale you want to emmerse yourself in and not get up to do something else. It has its own atmosphere and tone, and the writing is actually quite good. Lots of instresting descriptions for the environment (and emotional state). I like that Roland never truly gives up, and that he's willing to save those around him.

I definitely wanted Roland to bite a fool at some point, or generally fight someone with unbridled rage, but this isn't that kind of story. It's more about keeping hope in bleak situations and protecting the people you love.

Roland has some amazing internal dialogue with himself (speaking to "the wolf" so to speak, about how he should act) and I honestly wish there was more of that!) Really enjoyed that part. It was rather clever.

So far, this is a great tale if you're into character drama.

There are a few grammar mistakes, but they're mostly capitaliztion issues, which never pulled me out of the stroy (I just noted them because I'm insane). This is super easy reading.