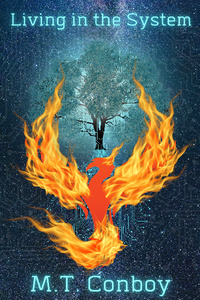 Living In The System - A LitRPG with more story, less text boxes

In the ancient echoes upon it’s great boughs, Yggdrasil holds all the knowledge in existence. Indeed, all of creation swings from its immense branches and leaves. The howls that creep through its cavernous spaces were not caused by the wind. No wind could be powerful enough to shake The Tree, yet it rocked.

A great battle raged in its dew drops and amongst its roots. A War for control. For knowledge is power, and power is everything.

A furtive glance over her shoulder told the hurried goddess that she was not being followed. That was good. What she had just done would be a great risk. Placing a new thread on a world so soon to be destroyed was costly. She would be greatly diminished, but her work was not done yet.

In the myriad of infinite worlds, there lies Genia. A starter world, of very little importance. It is where she will find her champion.

There are many stories to tell upon the Tree of Yggdrasil, where all of creation hangs from its branches. The power of destiny fuels all, but destiny is fickle.

He can only pray that things will go well.

Great start to a promising epic

Reviewed at: Chapter 1 - Splinters Of Wood And Uneaten Bread

Full disclosure, I'm the cover artist. I have nothing to do with the contents though and am reading the story as it evolves even though my part in it is over. I'm doing this because I genuinely enjoying this story so far, and looking forward to seeing how it unfolds. So much so, after reading it, I offered to help make the cover.

The main character Killian is a likeable hero and the magic/leveling in this story are done well. Easy to follow and not overwhelming the story like I've found some litrpg tends to do. The world building is interesting as well, loving the idea of wronged people being allowed a second chance to be a champion in a much larger world than they realized existed. Makes for a promising story arch.

I am picky about a writer's flow and have been having a hard time reading lately because of it. I had no trouble with this story. The authors writing is smooth, with a pace that doesn't feel rushed but doesn't drag either. I find it right in the sweet spot I enjoy.

I am looking forward to see how Killian's magic grows! He deserves it so much.

When I say I couldn't put this down, I meant it.

Reviewed at: Chapter 1 - Splinters Of Wood And Uneaten Bread

MT Conboy's writing is like watching GOT or some other large production show or movie. It is an event. I plan nothing else for a few hours and dedicate time particularly for it because it is so immersive that I do a disservice to both the story and to anything or anyone that I try to weave into that designated time.

When I say that I couldn't stop reading the chapter, I mean that I had a finger held up, mothioning for my husband to hold his thought that he was trying to share with me until I was done. Not that that I couldn't afford to wait until the end of a paragraph if I really needed to. But that's the thing, I didn't want to.

I look forward to seeing how the story develops.