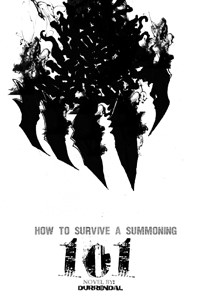 How to Survive a Summoning 101

Do you dare visit Sangraal?

Death was supposed to be the end for Rigel. Unfortunately, he caught the interest of a vile god. Ripped away from his world and all that he held dear, Rigel is thrust into the ruthless world of Sangraal, where gods walk amongst mortals.

Rigel must gather all his wits and dirty tricks to survive this brutal and unforgiving world. Meanwhile, his inner darkness threatens to twist him into something he doesn’t want to be. To navigate the quagmires of lies and betrayal, Rigel needs power.

But power comes at a price.  For Rigel, that price might be too high.

Overall Score 5.0
How does one review a story that’s over 800 pages long and started two years ago? Look, no beating around the bush. There are noticeable jumps in quality as the writer dramatically improved their craft along the years. You’ll need to accept some stylistic inconsistencies early on – although chapters are being edited along with new releases.

What’s there now is a must-read for fans of messed up stories. It’s very much worth it to push through the few chapters not yet updated. Just be aware that Grimdark here actually means Grimdark. Usually, on RoyalRoad, you can expect the most grimly dark thing to be a pony that stumbles as it jumps over a hedge. Here it’s more like: the pony explodes in a bloody frenzy as horrified onlookers reel in horror from the otherworldly nightmares creeping out of the carcass. It’s dark and very messed up. Know what you’re getting into.

Style Score 3.5 to 5.0
Starts out a bit weird in style with too much leaning on anime-tropes. Gets better quickly. The author improves a lot and with the edits coming to earlier chapters, it’s all good. Once the style reaches the current skill-level, it’s a blast and joy to read with no complaint from me. It’s a good style.

Story Score 4.0 to 4.5
Like before, it’s hard to judge properly. If I were to go from the worst, yet unedited parts, it’d be a 4 but with the edits coming and the current point in time. It’s a 4.5. There are some minor pacing issues that could be worked out, honestly.

Character Score 5.0
This always was one of the strengths of the story. The main characters develop a very interesting chemistry and their suffering is told very well. They’re proper anti-heroes for reasons, not just to be edgy and moody. This is a mature story and it shows most in this aspect. Rework or not, they’re amazing in either timeframe.

Grammar Score 5.0
Know this, I’m a non-english speaker, so my rating here won’t be of much use to you. Essentially, I’ll give it a perfect score unless I notice more than just a few typos here and there. Nothing to report here, so a five it is.

Still at chapter 21. Am impressed at the raw concept of the storyline. Needs polishing and more checking though. But the MC just keeps being on the brink of death. Hehehe

With his AP and other powers, he could just crush hearts. Same with the voices. He could just direct his hate and anger at them to shut them up and control them.

HOW TO SURVIVE A SUMMONING 101

Awesome, nothing much to say except that your novel is a fresh breath of air since its different from the usual "I went to another world" novels, coupled with the way the "mood" changes(first part was all lovey dovey and light, followed by grim and gore) it was awesome. I came to this site after rebirth online because I couldn't stand how there is only 13 chapters. I was exhilarated to find that there are more here, guess who's not sleeping today? Hope you do more of these!

But is it dropped?

Cause I would love to read more.

I recently began to develop a love for darker fantasy's with more imperfect characters. My most recent book was everybody loves large chests and it was great, but the main character never really grew. From what little I have read this is shaping up to be a potential favorite even when compared to the works of Brandon Sanderson and Dakota Krout (not really a fair comparison though since they are vastly different)

sangreal feels like a very unique world and I was not expecting such depth from a free book. The background lore clearly has had a lot of thought put into it and I advise you read the hints he gives you before chapters.

the characters are in depth and very believable in their actions. I can't often find an author that surprises me anymore but the pure crap that the MC is subjected to throws me for a loop every time. I can't get enough of characters that endure that kind of thing because it makes the times they let loose so much cooler.

the magic system is pretty basic for the other characters but the Devine Boons are such a cool feature.

Oh this is how it works. This is my first review hope you feel special. Anyway there are many books where "magic has a price" but I have never seen magical lash back that has such an emotional aspect to it and I love it. When he fights the souls in him I can feel the anguish. And to a lesser extent I can tell his emotions are slipping away. He still hasn't reached Boxxy level yet but I can see hints in there and can't wait to find out how it progresses.

i can't wait to read more of this world and I hope you continue to upload. Good luck.

As the title of this review suggests, this is a story about betrayal, death, suffering and how they would affect a seemingly “normal” person. Throughout the 33 chapter of “How to Survive a Summoning, 101” the author explores various psychological and philosophical concepts, while also maintaining the structural integrity of the story, so that it doesn’t end up as a cesspool of copy-pasted Wikipedia articles and overly long, but ultimately pedantic info dumps.

In regards to the flow of events throughout the story, as well as the implementation of the aforementioned concepts, I can’t help but feel a sense disappointment. The sudden tone swift, from a seemingly fun and lighthearted story, with bits of gore and a lot of curses, into a dark fantasy, with detailed description of death, rape and the guilt of not saving your loved ones, feels rushed and like a second thought of the author. This could have been arguably avoided, with small hints at the world’s cruel nature during the first few chapters or by actually setting the tone of the story as a dark fantasy, at the start. Also, while I would say that the world itself is well thought out at a first glance, it crumbles the more we look at it. Concepts like feminism and equality are said to have taken root in this world, but how that came to be isn’t explained at all. On the other hand, the constant rape of women in every part of the city is illogical, since if women where raped everywhere they went, they wouldn’t even leave their houses. At last, I have a large problem with the general lack of an end goal for the story itself. It feels like the author doesn’t know if he wants it to be about revenge, living on after the death of your lover or an adventure in a more cruel world.

In terms of grammar, while there are some spelling mistakes sprinkled in, they are minor and don’t distract the reader from the story. As for the style, the repeated usage of the same phrases again and again, especially in the latter chapters and the simplicity of it, make it seem less like a novel and more like something a 14 year old would write. And then there is the problem of POV. It makes everything seem centered around the protagonist and limits our understanding of the world and the other characters.

Rigel is probably one of the most enjoyable protagonists to read, in any of the light novels, web novels and Manga that I have read. His jokes, tenacity, sarcastic remarks and thoughts are very interesting and make him seem real in the eyes of the reader. Unfortunately that is where the compliments stop. With the exception of Rigel, every other character feels like an objects used for moving the plot along. This is reinforced by the disappearance of some of the characters like the granny, Suri, the ship crew and the dwarf. Then we have Arin and the elf assassin. Arin’s behavior during the small part of the story she is in, is explained due to her falling in love, but she still doesn’t seem like a real human, but rather the main character’s excuse to turn into an edge lord and the elf assassin acts like she suffers from multiple personality disorder. At first she hates Rigel, the she slowly opens up, then she hates him again, then she betrays him, but also cries.

All in all, while the story does have large problems, the are overshadowed by how fun the novel is to read. As a result, it is a must read for anyone who doesn’t have anything better to do, or for newcomers to the dark fantasy genre.