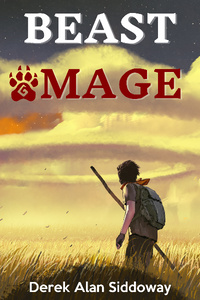 Kellen Lars may be the most unremarkable person on Earth. In the mana-enchanted land of Oras, he could become a legend.

After his little sister vanishes before his eyes, Kellen awakens in another realm inhabited by mythical creatures and people who shape the very forces of nature. These are the Beastcallers, wielders of elemental magics who ascend alongside their beast companions.

In search of his sister, Kellen explores a savage new world full of magical storms, animal demi-gods and warring tribes. Just surviving isn't an option. If he ever wants to see home again, Kellen must wield his budding powers and train his newly-bonded Mana Beast. Even if he succeeds, nothing will ever be the same again.

A young man from Earth. A Mana Beast. Together, they'll progress into legend.

Author's Note: This is essentially a rough draft version. Constructive feedback will be taken into account during revisions. Thanks for reading and providing your input!

Chapters update at a minimum of once per week on Thursdays. You can get early access to chapters and lots of other insider perks via my Patreon.

Come one, come all to Discord!

Reviewed at: Epilogue - End of Book 1

I know my review title is the most generic title there can be, but this story really does hold a great deal of potential for making into the trending page.

Style is rated with 4 stars, because albeit not being original, it's not a bad one either. The synopsis did say that the story will have a sort of digimon vibe, but in truth, it surpassed even that. It's more bloody, real, and most importantly the human companions aren't just sitting ducks. The more apt description is that to liken them to cultivators that pratice dual cultivation. Minus the intercourse.

The story is scored at 3.5, not because it is bad, because bad for me is around 2 and below, but because there is still room for improvement. The story for the most part is plot driven, but it is also written in a way that the MC's action seemed inconsequential for some of the major plot points. This could be attributed to the fact that the MC is relatively weak, but there were parts of the story that still could've worked out the way they did even without the MC being there.

The grammar score is pretty self evident once you get to reading. Not much to nitpick from, and barely any typos at all.

I'm quite torn with the character score. I can't say that the author is bad at writing characters, rather that he's good at it. The characters were descriptively well written. You can tell that they have their own personalitIes, and were written with the thought of them being characters with emotion. But because of how these characters were well written, I've also developed a sort of gripe against the protagonist's character and personality. The protag felt to me like someone who'll end up biting off more than he can chew, and in the process will bring trouble to those around him. I really can't say in behalf of others, but in all honesty, if someone told me that Alison was the protagonist all along, I'd be nodding my head like a chicken pecking grains off the ground.

Anyhow, gripes and criticism aside. I've enjoyed the story for the most part. The mysteries and history of Oras is well enough to tickle my curious imagination, for me to look forward for the next book.

I recommend for you to read it yourself, and hopefully enjoy it as much as I did. Or yet, find it a better read than I described it to be.

Reviewed at: Epilogue - End of Book 1

This does give off Digimon vibes, as the author said.  It's a bit darker, though, with a lot of blood and death, hopeless feelings and situations.

I would rate it lower, were this the end of the series, but as this is the end of a 'book' and there's more to come, there's obviously more room for things to grow and bloom.

And that's kind of my only issue. The MC is an anxious worrywart. I can understand it, even sympathize with it.  However, they pared him with a supporting character that...grates on the nerves for the most part. They don't even attempt to understand the MC and just treat them like trash constantly.  Some parts were hard to read because of it. Now, like movies, things 'got better' 'round the climax of this volume, but the fact that it took THIS long for one of the major-supporting characters to STOP grating on my nerves is a bit worrying. It might turn off some people, as the MC's personality might.

However, the MC's worrying and anxiousness is kind of...understandable? Not everyone's going to jump at the chance to have a dangerous adventure.

The MC's sister is a little less realistic then the boy himself is, however. She's a firebrand, and very over-the-top defiant. There's a few times where it feels like the Slavers should have just killed her and be done with it. However, Plot Reason demanded she survive. And despite my misgivings and some eye-rolling moments, I did find myself liking her despite the contrived circumstances that kept her alive.

Anyways, I might come back and redo this a bit more when/if I can order my thoughts better, but that's more or less it.  I liked the story well enough despite some of the things that grated on me. Looking forward to volume 2!

Interesting story with some very cool concepts; as I think other have said, it's reminiscent of Digimon or one of the other shows in that genre.

Writing style is fine, though a couple of the paragraphs would work better filed down or split. The only real downside is that the MC lacks agency. Still a worthwhile read deserving of your time.

MC is a wuss

Everything about the MC was a turn off.  He is completely wimpy, dull and weak, without any agency or control.  He starts of completely weak and delusional, and remains extremely weak and without agency all the way to where I read.

Things in the story seem to be set up such that men are wusses (or evil and powerful) and women are domineering, so the sister is tough as nails (even though she is just 10 years old from a lame modern background, captured by evil slavers), while the brother is a total wimp surrounded by 'allied' warrior women who treat him like crap (often without much reason).

I never figured out how old the MC is - 14?  Originally I thought he was an adult, but that seems very hard to believe.

Looking at concrete examples, we have a 10 year old girl who first defeats a full grown warrior / raider by kicking him in the nuts.  Later, once enslaved and being taught to submit to the slavers, she once more fights with him and this time headbutts him in the nuts (as if warriors had no idea how to protect their most vulnerable part).  Most jarring of all, she is not even punished for being a slave who fights back!  Instead, the warrior gets killed by his boss and she walks away scott free...

On the MC side, after being delusional for several chapters and constantly rejecting the reality around him, he sees a young woman hunting a huge magical bear (grizzly sized).  The MC, with no weapons or powers beyond wimpiness, decides to jump in!  The warrior girl in question gets mad at him for this and tries to get him to stay away, but still this thick-headed white knight continues to try to 'save' her.  In perfect shonen style, the power of desperate friendship manifests in him at the last second and he shoots a magical bolt at the bear that saves the day!!!  We (and he) had absolutely no idea he could do this up to this point...

Anyhow, the story was extremely annoying to read, so much so that I ended up having to drop it in frustration... I think if the sister could be the 'MC with a dork brother' the story could be quite interesting actually (so long as the brother PoV time was very limited).  The writing style is pretty good too.