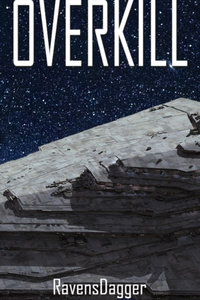 Barely two chapters in, and already my favorite fan-fiction post-epilogue of Worm.

The heroes of earth have won the last stand against Scion due to Taylor, and this time Amy "Panacea//Red Queen" didn't fuck up as much when releasing her limiter, allowing Taylor to retain her old power in addition to the Sapient Dominance that made her the last Catastrophe known as Khepri. Fleeing after the heroes turns against her, she is caught by Constanza "Contessa", whose Path to Victory make her tosse our heroine threw a portal into a galaxy far, far away, presumably a long time ago, on the arid soil of Tatooine instead of putting two bullet in her head to cripple her.

Now that we got the timeline, let's look at what we'll got here!

One of the most popular morally grey and cunning anti-hero of all time? Check.

The most well-known desertic planet, after Arakhis of course, in SF? Check.

The awesome Ravensdagger writing it? Check.

It is way too soon to tell if it'll be worth the long ride, but the introduction doesn't disappoint and, despite my totally non-objective bias, it smells good.

Skitter is back, and her creepy crawlies are going to mess you up!

Based on the hero (That's right. Hero. I said it. Fight me.) of the Worm online novel dropped into an unfamiliar world.

A fanfic combining Worm and what looks to be opening moves in the Clone War Republic era Star Wars. Two things I do enjoy and RavensDagger has seen fit to give it to me with frequent updates and solid writing I come to expect from them. How they manage to juggle this many fictions with this update schedule is honestly beyond me. But they do it.

Better than anything Disney ever did.

Come for the no-nonsense, proactive, get-shit-done insect controller, stay for the murderbot. Taylor ends up on Tattooine and by the Force she's not happy about it. The local Hutt crime lord are going to get the business end of her anger and then, it will be the turn of the corrupt Republic.

A fanfic featuring Taylor (from Work) being transported to a galaxy Garg, far away, and inadvertently being mistaken for a Sith Lord.

It's fun and fast paced. Taylor is still Taylor, and we see some familiar faces as she finds herself in the PT era.

This is mostly for Star Wars fans. If you like seeing Jedi, Sith, bounty hunters and space pirates, you'll enjoy this.

This is a crossover fanfic featuring the bug-control lady from Worm dropped into Star Wars. I can't speak to the Worm aspect as that wasn't my cup of tea, but the SW world is pretty well done (although I think a fair amount of it draws on SWTOR and/or books as well as the movies? I only know HK-47 from the mmo, idk).
As usual for RD it's easily read, fun fluff. I'm enjoying this one more than the Mom one, but RD does soooo many projects (at once) that there's probably something for (nearly) everyone to like.

Fanfiction? Not my cup of tea, but...

This review is kind of early (chapter 14 as of writing this), so take it with a grain of salt.

The story is about the protoganist Taylor from the webseries Worm in the world of Star Wars. In her own world, she was at her height one of the most feared and respected villains, known for taking things in her own hands and generally being rather ruthless but not quite pure evil.

This character is ported over rather well by the author, so fans of Worm can find a lot of their favourite Bug-Girl in this variant's character as well :-)

The other cast is currently a well-meaning droid, that translates Taylor's English into Basic for her and definitely is not a killer-machine in barely hidden disguise that just wants to witness as much mayhem and destruction as possible and therefore partners up with our protagonist. Other sidecharacters are written well and are a joy to read from (be at the unfortunate Tusken Raiders or the Faleen slaves)

Currently at Tatooine, the Star Wars Universe feels authentic as far as I can personally tell. It certainly feels like a way more conflict heavy story from the author than some other stories from them (which is certainly a good thing, as Taylor is quite prone to escalate things in her original story :-) ). However not too much has happened as of yet in terms of story-goals (but the story has a faster pacing!), which is quite likely the result of reviewing early ^^' anything other than giving 5 stars would be unkind, as there are already some interesting strings and paths opened the story might progress to :-)

The author's technical prowess in terms of grammar and readability is above what I would consider average and overall, I can certainly recommend reading it :-)

Even though I normally shy away from fanfictions, as too many of them... are simply never finished by their author ^^'

This is a wonderful crossover where Taylor Hebert aka Khephri gets Isekaid into the Star Wars universe. If you are reading this review, stop and go read the story instead. I promise that you won't regret it. I am hoping this review will help the Author to build motivation to continue this story past its listed 26 chapters on spacebattles.com even though this is a fanfiction and Ravensdagger has mostly moved on to original fiction nowadays. Ravensdagger if you are reading this, I would also be happy to read any update to your Worm Overwatch crossover. I just love all of your vibrant characters. Thank you and keep up the good work!

This is a hoot of a Star Wars / Worm crossover

This has to be the best fanfic crossover I've ever read.  Dont worry about it if you didnt like worm, this is more of a comedy than a dark depressing everything turns to poop kind of story.

I dont know what I like more, Taylor made over as an accidental Sith, or the fact that it has the best rendition of HK-47 outside of KotOR I've come across.  Sorry Solfis, you're just a wannabe next to this guy ;)

A very amusing and interesting take on what if.  Give it a read of you're a fan of knights of the old republic, or enjoyed Worm (though its really nothing like that).