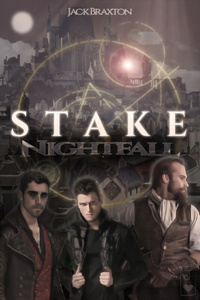 Sol become distracted by the sound of a death scream outside, causing him to fail at reacting in time. Valamir dragged the man over the large-framed bed in the middle of the room. He was unable to prevent Valamir from drinking the man’s blood. Sol turned to investigate the source of the sound. He discovered Alaric standing over the corpse of a thrall with his dagger in hand. It was coated with the dead thrall's blood. The remaining thralls hesitated to approach the furious brawler.

Alaric will have to solve this on his own. I have bigger problems to deal with, right now.

Sol ignored the commotion outside to focus on the threat in front of him. He leapt over the bed between them to charge toward the vampire at full speed, but he wasn’t fast enough. Valamir agilely dragged the man out of Sol’s reach in a fluid motion. It took only an instant for the man to be completely drained of lifeblood. Valamir carelessly tossed away the lifeless body, licking his bloodied lips. He turned toward Sol before tapping his mouth thoughtfully with a finger.

“Bitter. I’ve never been fond of the taste of despair or fear. It’s more of an acquired taste. The flavour is desire is much more intoxicating. Do you agree? Forgive my rudeness, it was inconsiderate of me to flout your current state. You must be parched. It is unfortunate that you rejected my offer of refreshment. The woman’s life energy has dissipated and gone to waste. A pity. Although, clearly you are no stranger to drinking corpse blood. Perhaps you would reconsider my earlier offer of refreshment?” Valamir mocked him with dramatic regret.

“Since we’re on the topic of palate preference. I’m more partial to the taste of vampires. There’s something distinctive about it. It comes with a host of benefits that human blood can never offer me. I think I will accept your offer of refreshment…” Sol aggressively retorted, grinning to expose his elongated fangs.

“Hiss, that’s blasphemy against the Queen of the Night’s edicts! It’s sacrilege to drink vampire blood. I knew you smelt different from ordinary corpse-drinkers. I won’t allow you to leave here. Delivering the chattel to the docks is secondary to removing the stain of your heresy. It is my duty to execute you,” Valamir venomously declared. His face became contorted with hatred and disgust.

“Ironic. A vampire talking about blasphemy. Our very existence is blasphemy. The Queen of the Night isn’t a god. No matter how many worshippers she has, she’s still a false idol,” Sol sneered in reply.

Sol’s expression was equally hostile as he fixed his gaze on Valamir. He advanced menacingly toward Valamir, reaching into his pocket to caress the sunburst inside. The burn of the silver had increased in intensity. The effects of the blood belonging to the vampire that turned him had begun to dwindle. Something in Sol’s demeanour unsettled the full-blood, causing him to involuntarily step backward. Sol suddenly rushed forward with a burst of preternatural speed, simultaneously retrieving the contents of his pocket.

Let’s see how much this bastard likes the taste of silver.

He gripped the sunburst between the knuckles of his right hand. Flicking an open-handed feint with his left toward Valamir’s eyes. The vampire flinched away from the claws nearing his eyes. He attempted to shrink away, but his retreat was cut off by his back slamming against the wall. The force shook the room, causing a cloud of dust to fall from the ceiling.

Sol used Valamir’s momentary distraction to throw a straight punch at his head. It connected with a solid impact, rocking his head backward. Valamir released a piercing shriek as he clutched at his face. A cut on his cheek caused by the silver sunburst was smoking. Smouldering ash was bleeding from the open wound, preventing it from healing as it slowly grew.

Sol took the opportunity to follow up with an elbow into Valamir’s nose. He didn’t allow him to recover before throwing a forward knee into his sternum, eliciting a grunt of pain. Sol dodged out of reach of Valamir’s retaliation. He wildly swung a backhanded claw toward his face, which Sol easily evaded. Valamir grit his teeth in intense agony to regard Sol, dropping down his hands.

“Silver. How do you hold it with impunity?” Valamir asked in disbelief.

“That’s not all,” Sol smugly replied. He held his hand up for Valamir to see, dancing the sunburst across his knuckles. Valamir hissed and flinched away in fear. “Haha, don’t be like that. The Lord offers salvation for all. No matter your sins. Why don’t you take it? You need it more than me. Here.”

Sol flipped the sunburst into the air, catching it between his fingertips in a pincer grip. He offered his hand to Valamir. The vampire shielded his face with an arm while retreating into a darkened corner of the room.

“What are you? You aren’t a corpse-drinker. You aren’t a thin-blood or full-blood. Dead man’s blood holds no power. It’s only poison. It has no benefits,” Valamir whimpered, crouching away in an attempt to escape moonlight reflecting from the silver sunburst.

“On that, I partially disagree with you. Her blood doesn’t have any and should remain undisturbed, but yours does. From the way I see it, you are a dead man. You’re just too ignorant to understand it yet. I’m about to correct that,” Sol announced. He suddenly hurled the sunburst at the cowering vampire with overwhelming force.

Valamir neglected to see Sol’s actions which meant he failed to react in time. The silver sunburst flew with unerring precision under the vampire’s raised arms. It collided into his exposed chest with bone-crunching force. Valamir recoiled at the sudden pain. His ear-splitting scream frightened a nearby roost of pigeons into scattering in all directions. Under the cover of the sound of flapping wings, Sol crossed the distance between them. Taking advantage of his vulnerability, Sol plunged his fangs into Valamir’s bared throat.

Sol ignored Valamir’s feeble struggles, noticing the sunburst embedded halfway into his skin. He mercilessly slammed a palm against the silver to drive it deeper through the ribs it was wedged between. Valamir gasped in agony in response to Sol’s savage actions. Sol was suddenly able to overpower Valamir’s defences and began to drain him of blood.

Sol heard the sound of rapidly approaching footsteps but was too enraptured by the taste of blood to react.

Bio: 📚│Here are my stories for the history books

Looks like I need to check my notification settings again

It looks that way, everyone was replying to your last comment 🤣

Wouldn't be fun and a surprise if vampire queen is an aspect of or an actual goddess after all. (Of blood and moon for example.) 🌙

Maybe if this was a culitvation novel 😂

ok.. sorry for the comment on the previous' chapter.... it's all clarified here. I misunderstood the slang :)

That works out perfectly! I'm glad I got to clarify any confusion I unintentionally caused 😜