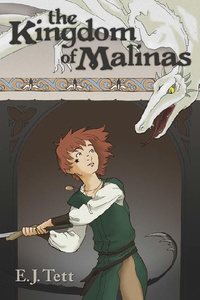 The Kingdom of Malinas (YA Fantasy)

Sorrel had joined Leif and Lachlan on a trip back to the wood in the Vale. They would bury Orsino, home, where he would want to be. Old Synan would not allow them to take Gaeshi, persisting with his claims that the boy was not dead, and Sorrel would not let Mariko accompany them.

The wood looked different to the last time she had been there. It was darker now, quieter. Eerie almost. Evidence of the fire remained - blackened trees and huge areas of burnt patches on the ground where everything was dead. Stalks of fern and other plants had curled into their final positions beneath trees that had only half-defended them before the flames had turned them brown and brittle.

Most of the tents lay in soggy mounds growing mould or in scattered pieces, black and stiff. Only a few tents still stood whole and these she could just make out through the trees farther into the wood where the fire had perhaps not been so fierce.

She sighed as she walked through the wood ahead of her two companions carrying the body. It didn't feel like home any more.

"Where to, Sorrel?" Leif called, his feet crunching heavily behind her. "I'll let you pick a nice spot."

She carried on walking but nowhere felt right. It wasn't long before they had come right out the other side of the trees and stood not far from Old Synan's teaching hut. The sun shone here and as always the river burbled along. Sorrel smiled and nodded. This was the place.

"Here," she said. "Under the beech tree. It's peaceful here."

Leif stopped and he and Lachlan lowered their friend to the ground. Leif took a deep breath, drawing in the fresh air. "Well chosen," he said. "We can carve an epitaph for him on the tree."

She agreed and helped with the sad task of digging a grave. She used her hands, Leif an old saucepan he had borrowed and Lachlan had managed to find the remnants of an old shovel in the wood.

When they had finished, and laid Orsino to rest, they stood back and lowered their heads in respect for a moment or two.

"Here lies our dear friend Orsino. Brave Elani warrior of Silence Gorge. Gone ahead of us to the Gates of the Golden Valley. May he be at peace."

Leif finished scratching the carving and stepped back. He smiled wanly at Sorrel and taking her hand, quietly walked away.

Here lies Orsino, she thought, her heart hardening. First victim of the war against the Lamya.

"My ankle's itching like mad," Saoirse said, pulling away from the boulder and going to stand in the open. She sat down on the rock and scratched furiously at her bandaged ankle. "Ooh! It's really bad!"

Jia also let go of the boulder and stood in front of Saoirse with her hands on her hips. "It's healing. Scratching will do you no good."

Seeing that this was a perfect opportunity to take a break from pushing the rock, the rest of the Elani joined their two friends and sat comfortably together in the smoothest part of the cavern, not far from the boulder.

Jia gave him a fond smile as he stood alone by the Lamya–inscribed boulder. "Come and sit down," she said gently, smoothing her skirts as she sat, "let us rest, then we'll double our efforts."

Cloud took a step forward and looked back at the boulder. He was unwilling to leave but decided ruefully that they could all do with a break. He sat opposite Saoirse and watched as she continued to scratch under her bandages. "Do you have to?" he said, rather grumpily.

Saoirse grinned. "Does it annoy you?" she asked. "Cos it's irritating me like mad." But she stopped scratching and leaned forwards to stare at a small round pebble at Cloud's feet. "What's that?"

He moved his feet out of the way as Saoirse reached for the pebble and inspected it. "What?" he asked, half-hoping for a clue.

The ex–slave held the pebble up to where a shaft of light streamed into the cavern, then she got to her feet and twisted it around to get a better look.

The other Elani simply smiled, thinking no more of it, and returned to their conversations. Cloud, however, jumped to his feet urgently. "Put it down!" he cried. A sudden dread surged through his entire body and he stared wide-eyed at the pebble.

Saoirse caught the warning note in his voice and quickly dropped the pebble to the ground.

Everyone stopped talking and watched as the pebble rolled along the floor and past them all until it came to rest in another shaft of light. The cavern was strangely quiet and still. Then there was a sharp click! as the pebble did one last flop into position.

Saoirse gulped and turned to Cloud, who looked at her and then slowly, expectantly, to the pebble. It glowed, reflecting light off the emeralds – soft light at first and then a great shaft of green shot from it. He turned back towards the boulder. There, the single beam moved, aiming at something until it found its mark suddenly as it hit a huge emerald that he hadn't noticed before above the boulder.

The light that bounced back off this stone was sharp and precise and a thin beam, coming around the small group in a perfect square, penned them in.

Each got to their feet and looked in utter amazement at the narrow beam that surrounded them. It was there on its own now, both the pebble and the emerald stone had stopped reflecting light. It seemed to levitate around them, halfway from the ground, a full and perfect square.

"Shall we go under it?" asked Kirin with a shrug.

Cloud held out his hands to stop anyone from moving and crouched down to the floor. He could see there was some sort of force that would prevent them from going under, and over too. It was like looking through glass, with the green light the barest hint of where it began.

"Maybe if we break the beam?" Jia suggested.

Saoirse backed up suddenly, coming closer to the middle of the square. She pointed a finger to the shadows nearby and said, her voice shaking, "I probably shouldn't have touched the pebble, right?"

Cloud grouped with the others nervously in the centre of the square. All the shadows in all directions were moving and slowly, so very slowly, they crept towards the contained Elani.

Then they formed shapes. And they were the shape of man. Then they stood upright and continued towards them. Gradually the shapes filled out and became very real-looking skeletal beings, virtually transparent with loose grey skin and ragged clothing, some wore the remnants of old armour.

Maemi screamed, cutting the sound of silence, as row upon row of the strange beings came out of the shadows.

Cloud was stuck rigid in fright. His worst nightmares were made of this - trapped in a strange place with more than one scary monster coming at him from the shadows. How he wished Sorrel were there!

The beings stopped. Just as they reached the beam. So close to him that if they were to reach forward with their bony fingers, they could grasp him and scare him to death with no more than a touch.

Saoirse recovered herself quicker than he did, and Cloud held his breath as she took a brave step forward. Face to face with them she stood, separated only by the thin green beam of light penning them in.

"Ugly," she whispered peering into the eyeless sockets of the grey men.

Cloud shook himself and regained some control of his senses. "If we break the beam," he said, "they'll attack."

"We can't stay here." Malin half-turned to him, the modified staff weapon of his – flint tipped – held ready. "We've all got our weapons. Leif taught us to never let them leave our side."

Cloud pulled his jacket open, revealing to Saoirse two short half-blunt blades he used for cutting vegetables. He didn't even have his skinning knife with him. He shrugged apologetically. "Better 'n nothing!" He took one for himself and handed the other to Saoirse. "Then we agree?" he asked the others. "Break the light and fight our way out?"

Without a word, the Elani nodded, breathed deep and gritted their teeth. They really had no choice but it was as Saoirse said, how do you fight an enemy you can see through? Cloud stepped forward. Calmly, he broke the beam.

Bio: Probably too old and too grumpy. I love dogs, and gardening. And Ninja Turtles.