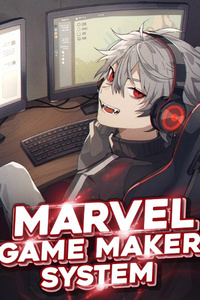 Alex was an ordinary person with the dream of one day being transmigrated to a magical world.

Tony Stark: I hate this! I can do in real life everything this Watch Dogs guy does, but why can't I stop playing?

Nick Fury: If any agent can't complete the Hitman game by next week, that agent will be fired from the Shield!

A world of superheroes, but who controls everything is "only" a game developer.

I had read a story like this somewhere before, but the focus the other author was giving wasn't what I wanted. But this author luckily stayed focused on writing about game making and how MARVEL characters react to those games.

The main character is not the typical Chinese cliché that keeps causing problems for other people, or wanting to kill someone for saying something wrong, no, the main character is actually a very charismatic and carefree person, just having fun with the games he makes and with reactions with other players. (I even liked how the author focused on 'Ned', who is always ignored only as Peter Parker's best friend, and also how he portrayed the X-Men feeling inside the games.

As to the date the story takes place is still unclear, mainly because the protagonist doesn't know he's in the world of MARVEL (which makes some misunderstoods funnier than they normally would).

The only thing that bothered me a bit were some grammar mistakes I found while reading it, but according to the author's notes, apparently he's going to hire a proofreader to fix this, so I'm glad it's just temporary.

Anyway, it's a nice story with a nice rhythm. I hope the author keeps writing.

A kid playing with action figures

The best thing I can say about this story is that it is fun.  Everyone is nice and it's a feel good story.

The problem is that it's like a teenager is watching his younger brother play with his toys and writing it all down into a story.  None of the Marvel characters feel like their actual characters, they're all the same character (the MC/author) wearing a different skin.  Everyone is way too impressed and happy with the game.

Nowhere is this more obvious than when Professor X shows up.  It's clearly a kid pretending to be a wise old man in a wheelchair, where the objective wasn't to show how the real character would react, but to just have the MC have a polite chat with him, to have the Professor praise the main character.

The system is also completely arbitrary.  It can basically do everything, whatever the author needs it to do.  There are no problems, everything is just "system, add this" and it's solved.

In the end, this feels like it's written not by an author but by a teenager that's just having fun, so I don't even feel right criticizing it too much.  It cannot even be criticized as a proper novel, it clearly isn't one.  There's no antagonists, no conflicts, not even really a story.  Just some characters having fun playing Minecraft.  For some people though, that's enough.

Had Hopes, They Were Crushed

MC kinda sucks, steals ideas and then makes a p2w system and then acts like everyone would spend money on it. The main character has the feel of being from a chinese novel without ever directly acting like one. The people who play the games reaction are kinda bad and not realistic at all, and the story could've been done a lot better if it didn't start off as a VR mimic type of thing and actually gave room for some plot development. It's a wish fullfillment story, and not a good one. Grammars alright.

Those are the pros.

The cons are the reletive inexperience of the author and the problems that arise from that. Weird grammer and stilted dialoge leave a good bit to be desired, but inspite of that the premise is entiving and fun enough that i want to keep reading even if i get pulled out of the story.

This story is a fun fast food story. It's something you can read and skim without minding the detais and just read for fun. The essence of this story is that it shouldne be taken seriously, only in face value. The problem with this?

It's a fun fast food story, and one of it's fundamental characteristic is lacking. This is easily to be skimmed through and understood, the lack of chapters is a disadvantage, but this is a new story so it's understandable. Thats basically it.

Overall, I can recommend this to you if you need something to read and just throw away every problem.

Reviewed at: 21 - Someone Killed the Ender Dragon

I have read a lot on this platform, but this is the first new idea I have seen in awhile.

The story is extremely binge-worthy and I am hooked!

My only complaint could be that their are slight grammar issues, but nothing significant enough to disrupt my reading experience.

This story is not the best written story on the site. It does not have the deepest, most airtight plot. Sometimes you can see that the spell checker substituted in the wrong word and the author didn't see it. Sometimes you might wish that the characters did something else

But these all come with writing experience (I would think) and time and are part of the learning process. And that's okay

And this story has something that I believe trumps these thing. Fun. The story is fun. It's fun to read. It's fun to imagine. And most importantly, it seems that the author is having fun writing it.

So NunuXD, continue having fun writing. It got some people to smile while reading it and I sure hope you had a smile while writing it

The entire story seems to just be marvel characters playing a VR version of minecraft.

That's it. There's literally no story to get into here as far as I can tell...

The premise of the story had some promise, I mean the guy gets a system to make games and he gets points based on how well his games do which he can use to create new games and buy stuff ranging from food to superpowers...

But the delivery is just incredibly boring. Reading about marvel characters hanging out in minecraft got old kinda fast and as far as I can tell, even if you reach the end of all published content for this story, that's literally everything the story is.

For those of you who thought they were coming here to read a marvel fanfic, I'm sorry, the only thing you'll find here is a minecraft fanfic with a marvel character crossover.

So bad it's okay.

Okay, exaggerating just a bit, but I'll be real here, MARVEL is probably the epitome of fan fiction. It is crudely written, the dialogue is often bad and character interactions are incredibly odd.

In that sense I couldn't recommend it as a normal book, however it's a fan fiction, which makes it kinda cute. So when forgetting the flaws and turning your brain off it makes for a decent time filler.

I just love it when authors try something different. Although the writing quality could have been better, I personally have no complaints. A really addictive story. I can't wait to read more.

Thank you so much for writing and sharing this with us.

P.S. When is it in the timeline exactly?