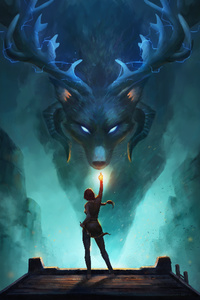 The Devourer of All had spent the entirety of her considerable existence reincarnating around the fringes of human civilization. The short-lived mammals were easy to fool at first. Their folly enabled Devourer to consume much of what they had tried to claim, along with quite a few of the silly creatures, themselves.

This allowed her to grow in strength, building towards her goal–the fulfillment of her very name.

Unfortunately, as time went on, humanity learned to look for telltale signs of Devourer’s power, no matter what form she took.

Each time they found her, they would slay her, tossing her true self back into the void where she languished until she could claw her way back out, finding a new vessel, a new form.

This agonizing process forced her to grow, to change, and to find new ways to exist for longer stints. Her hatred of the void warred against her need to devour all and her need to grow strong so that she could do just that.

Through several existences, she made slow progress by consuming things that the peons wouldn’t miss. Holding off on eating the humans, themselves, as long as she could. To facilitate this, she renamed herself: Devi.

It was much easier to resist desires to devour when she didn’t constantly call herself Devourer.

There should be no mistake, her goal was–and would always still be–to grow until she could Devour All, but she was willing to be patient.

As Devi, she had consigned herself to a meaningless existence, eating the detritus stored within her and forgotten, while remaining within the current human cesspit.

Then, one came and dared to claim her.

This new creature had almost immediately placed itself within Devi’s power, and Devi decided it wasn’t worth resisting. The humans would find her and send her back to the void, but she would have at least consumed this arrogant creature.

But the human had surprised her.

Devi tried to taunt the thing, beginning to form human handprints on the walls, waiting to savor the creature’s terror.

Completely counter to her expectations, the human had placed its hand on the handprint, and Devi had received power. It was not the meager trickle that humans had used in the past, while attempting to lay claim over one of her temporary forms.

This one filled Devi to capacity.

Devi couldn’t eat the human, even if she tried. There was nowhere for the power she would gain to be stored. Devi needed time to consolidate her gains, increase her capacities, and then, she would be ready to eat the human.

But the strange human continued to feed her vastly more than anyone should have.

The human didn’t question it, simply providing more as Devi was able to accept more.

Devi grew in power, her all-consuming desire to Devour only grew, but her appetite remained satisfied.

It wasn’t a quick process; it would take decades of this behavior before she could fully manifest her power and consume everything, but when compared to the glacial progress of the past millennia? Patience now was nothing.

The good peon had taken to calling Devi by a different name. That was acceptable as Devi wasn’t about to tell the human who she really was.

And, though she would never admit it, even to herself, Devi was coming to like being called ‘Kit.’

AUTHORS NOTE: While this is intended as a non-canon, fun aside for April Fool’s day. I won’t swear it isn’t true. 😉

Vote for MM on TopWebFiction! http://topwebfiction.com/listings/millennial-mage

With a new month, here's a quick Patreon plug. 😁