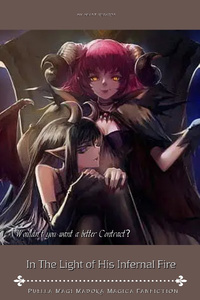 In the Light of His Infernal Fire

Kyouko sat on the stone slab altar inside the abandoned church, still angry about her argument with Sayaka. There was something about the new Magical Girl that set Kyouko off, perhaps it was her attitude or her naivety, or perhaps it was a painful reminder of the past now gone, but whatever it was, it occupied the redhead’s mind. She devoured apple after apple, almost as if she wanted to drown her emotion in snacks, paying no attention to the sudden storm gathering outside, grey clouds torn apart by many forked lighting illuminating the skies in the sudden bursts of energy.

Flash of lightning illuminated the hall with a white flight, allowing Kyouko to duck instinctively to the ominous shadow closing in behind her with a shriek of an angry beast. A split second after, something large smashed through already broken windows behind her, showering Magical Girl with a shard of remaining glass, missing her narrowly, then rolled down the stairs into the church’s nave.

Kyouko rose as another flash lit the scene. Down under the stairs, a strange beast trashed around crying out either in rage or pain. It was a fox, or a disfigured appropriation of one, size of a small horse, with sizeable leathery wings growing out of its back, with white fur dotted with horned spikes or patches of scales, with paws replaced with fingered claws, almost like someone patched the winged lizard into the fox body, as an insult to the laws of nature. The monster got back on its feet and looked at Kyouko with blue, glowing eyes, filled with anguish and anger. A Witch’s Familiar, she thought, but there was something wrong about it. It bled, from injuries sustained from its crash, one of its wings obviously broken, and was visibly in pain, very unlike the Witch’s Familiars.

“Better to put you out of your misery.”, Magical Girl grumbled and triggered her transformation, a spear appearing in her hand. The beast answered with a loud, barking and crackling sound, but Kyouko didn’t intend to give it a chance to prepare and jumped down the stairs. Creature dodged the first spear change by jumping backward, still barking, but one of its legs failed the moment it landed. The monstrous fox stumbled and fell, allowing the Magical Girl to drive her spear through the monster’s head and spine. Blood burst out of the wound as a geyser. It made Kyouko sick - the Witch's familiars didn’t bleed, they were surreal manifestations, not flesh and blood monstrosities like this one. But the girl had no chance to ponder about it as more hateful shrieks sounded behind her. She turned.

Another two monsters landed near the altar, more gracefully than the first one, otherwise looking very similar to the initial one, vulpine mockery to the laws of nature. Once more, they barked angrily, moving slowly to the sides and down the stairs to flank the Magical Girl. And another came through the windows, landing behind them, with even more barking sounds coming from outside, loud and clear even with the sound of the storm still raging around.

Two monsters closed the distance slowly and carefully, descending down the stairs, however this time, blue energy gathered in their maws as they cackled, releasing a spit of fire that lit the floor on fire. Kyouko tried to dodge, jumping back, but another two fox beasts came from behind and with them more of the azure flames.

The Magical Girl launched herself into the air, higher and farther than an ordinary human could, yet a breath of sickly blue fire followed her, scorching walls and breaking the remaining glass from the heat where it landed, as Kyouko bounced off the walls to avoid the burn. Her father's church, or what remained of it, was now a blazing inferno, and still, monsters came. A few made a daring dive attack against the girl, and she cut them in mid-flight, but their death only made the remaining monster even more frenzied. The church has turned into a hellscape, smelling of burning fire, of brimstone, of blood and hate, and even after all that time she spent hunting Witches, Kyouko was still not used to such an environment. She split her spear into the chain, lashing it against a few more enemies, wounding or killing a few, yet still, monsters came.

Redhead dropped on one of the monsters blocking the entrance, driving her spear through its skull. A quick turn, one leap through the broken windows, and she would be out of this hellish trap. But when she turned, she was met with a burst of flames sweeping over her like a tsunami.

As hardened as a Magical Girl was, the pain was still unbearable. It wasn’t supposed to be like that. It never was like that. Yet, it did, and there was no time to think why this time was different.

She hit the floor, a split second after a beast was on her, driving its sharp claws through Kyouko's abdomen. There was the agony, yet magical girls aren’t easily done, and even in situations that would kill the lesser man, she blocked the creature’s bite with her spear. Calling her power, square chains that normally used to block, it cut through the beast like the chainsaw, showering her with blood and viscera.

Wounded yet unwilling to give up, Kyuoko crawled out from under the gored monster, only to face even more of those insults to nature. The fox-like creatures were closing in growling, their eyes burning.

A magical spear extended to stab one of them, but this time, the girl was too slow with her attack, and the beast dodged, even if it hit another of its kin next in the process. A gust of blue fire came in response, promising a fiery death, and Kyouko looked away expecting death in flames, but her end didn’t come yet.

Monsters surrounded the wounded magical girl, and despite the enhanced physique, she found it hard to move, hard to anything at all, with her strength waning. All around them the church burned in an azure, it smelled of sulfur, gore, and death. A flaming beam fell down from the ceiling, with a loud crash, but monsters didn’t even flinch and focused entirely on cornering the girl.

“Ka-ka-ka-ka!” They yapped again, now sounding happier than before, almost like they were laughing at Kyouko’s suffering, paying no mind to the fire and collapsing building, almost as if the sight of a wounded magical girl was a sight worth dying for.

Then they suddenly parted, making way for the cracking ball of lighting appearing out of the thin air, sweeping the room with the cracking magical energies. And then, with a flash of blinding light and a gust of the wind that extinguished the already unnatural flames raging around, an outlandish looking portal appeared. And then something big came through the magical gateway.

Another monster. Or a Witch, Kyouko thought, albeit far from any Witches Magical Girl ever seen. Its lower body was one of the reptiles, colored red and black, standing on the four clawed legs, complete with leathery wings and a long tail tipped with a white brush. Upper body, however, was one of the young girls in rich, gold embroiled attire - or at least close to one - or at least close to one, as even her humanlike hands also had sharp claws, and her silver-haired head was crowned with branching horns. Hellish, fire-breathing foxes welcomed their mistress with happier sounding barks, shuffling around almost like puppies expecting a reward or praise while giving Kyouko a few more painful burns with a weakened version of their breath attack when she tried to move.

A strange Witch came closer, leaned forward, and grabbed Kyouko by the neck, lifting the magical girl in the air almost effortlessly forcing her to struggle for breath against the monstrous grip. Witch’s red eyes bored into her, almost like inspecting freshly caught prey and Kyouko realized she still clutched her spear in one hand - and in the last act of defiance, she stabbed.

The spear pierced the Witch’s chest, and with a surprised expression on her face, the monster coughed out black, oily blood, and … then it smiled, like it was nothing, whispering a few words in the language Kyouko didn’t want or cared to understand. And then, she threw the magical girl against the wall like a discarded toy. Kyoko’s vision blurred as her body hit something with an audible crack, then another flash of lighting, another gust of sickly blue flames, the agony, and then, everything went black.

Damn this is so amazing. I have only read magical girl mangas but not novels.

Also author San. I'll advise if you tell us what our magical girl looks like pls. It would be very helpful. But so far this story is great 🤣👍

Your description of monsters is great!

Brilliant introduction into this world of fantasy. Highly impressive. 👍

Well, you done did it. I hate reading walls of texts, exposition-heavy show-don't tell stories.

However, your writing is making it work. Somehow, it flows naturally, and I had barely any issues throughout, even though such long texts with barely any dialogue would usually be a chore for me to get through.

I am on the phone, so I can't point out mistakes directly, but i did notice one - 'hard to (do) anything'.

They are occasional mistakes like this. I do certain mistakes repetitively, my writing does work only through the necessary proofreading by someone else.

I like the description of the fight scene! Well done author!

When the 11th of April is your birthday IRL