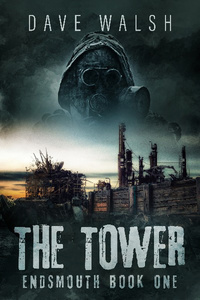 After a few hours at her workbench, Vera leaned back and stared at her latest creation. Without a doubt, it was more sleek than the contraption that Will wore on his hand, but she had a bit more experience with this kind of work now that was bound to happen. The shin guard itself was made of plate steel, lined with padded leather with a few pressure-sensitive buttons on the inside. When it powered on and there was pressure applied, an electrical charge would run through and deliver a shock to who- or whatever was on the receiving end of it. Like he asked, there were a few sharp spikes attached to the front—metal to ensure that they conduct electricity as well—making it quite a mean looking contraption.

There was only so much work that she could do on it, she told herself, forcing herself to stand up and stretch, a loud yawn escaping from her mouth. It was past time for some sleep, especially after such a strange 24 hours or so. While she had been trying to avoid it, the thought of returning to their suite and dealing with William was low on her list of things to do. Once again, she wished she had somewhere else to lay her head, even if it was just a mattress on the floor in her workshop. With a deep breath, she locked up her workshop and headed towards the elevator. The hallway was quiet, unassuming, but images of the previous night flashed in her head, reminding her of all the horrors that lay beneath the surface at Branch Tower. She walked a little quicker towards the elevator, remembering the dismembered body from the prior night and a chill running down her spine. The elevator felt like it took longer than usual, but after an eternity the "ding" startled her into jumping into it, pressing on her floor and mashing the "close" button.

Her anxiety was far from lifted, though, when the elevator spat her out on the floor of their suite. Will had been an ass before. This wasn't anything new, but he had never been so humiliated. She knew a lot about Will, but this was virgin territory and considering how enraged he got over some schlub in the arena getting a few hits on him made him, Gabriel using his ring and defeating the Crusher would definitely have an adverse effect on him. It was late, which meant that everything was quiet on her way to the suite. The keycard slid in; the light turning to green with a click, only for her to open the door to total darkness. Like she had thought, it was late. Hopefully, she could just slip right in and avoid any sort of confrontation.

"You done fuckin' 'round, then?" He was drunk. Very drunk.

"Oh," the sound of bottles clinking. "I thought you was Jenna."

"Will," she said, flicking on the light to see him slouched over the table, his kimono hanging wide open. "You are very drunk right now. Where is Jenna?"

"With Chip or Chad or whatever," he slurred. "Branch's fellas. She's gonna be a singer at the arena or sumpin'."

"Wait, what? Jenna, a singer? Have you ever heard her sing, Will? She's terrible, even by end-of-the-world standards."

"Did you say Branch got to her?"

"Okay," she said, taking it all in. "So she's not here and you haven't seen her all night?"

"Jus' flirting around with those two cunts is all."

"Shit, I'm sorry, Will. I told you that Branch wasn't a trustworthy guy. I didn't think that he'd act this quickly, though. Wow, he's really losing it."

"Okay, okay, calm down big guy," she wrapped her arms around his large, sullen shoulders. "C'mon, let's get you into bed already and get you on your side so you don't choke on your own vomit or something."

"Take it to bed, Will," she admonished the brute. He shrugged and stumbled to his feet, letting her help guide him to bed. "We'll talk more in the morning, but things aren't looking too good right now. We need a plan."

"Just lay down." She pushed him down onto the mattress, his body bouncing before his head hit the pillow. It wasn't long before the rumbling of his snores filled the room. There had to be a way to outsmart Branch at his own game, but she wasn't sure how deep his deception went. Jenna was, if anything, a "gift" from Jordan for Will in the first place, so her being snatched away made sense. As annoying as Vera found Jenna, though, she would miss her if she didn't come back. Vera suspected Jenna would find her way back to Will, this being more of a show of power by Branch, and that he could easily take everything away in the blink of the eye. This was Branch showing that he was still in control.

Vera sat on the edge of the bed, staring at his gauntlet that laid on the floor, power pack next to it. She kneeled down and checked the charge on it, showing it to be almost empty. He must have been sitting there all night, leaving it on, stewing, drinking himself into a stupor, and thinking about knocking someone's head off. If Branch kept playing these games, the chances of Will lasting much longer were almost nil; he was going to break, and he was going to break soon. There was just no way of knowing when it would be. She picked up the gauntlet and sighed, knowing that she had to go lock it up and charge it, keeping it well away from a drunken, wounded puppy that was Will.

She was exhausted, but she knew that Will, with access to weapons, booze, and his thoughts, could only mean bad things. In fact, they were lucky that nobody ended up dead already. It was back to the basement, back to the workshop with her, even though she was feeling rather foggy herself. The elevator was once again crawling, which she just chalked up to her impatience. The trip down was fine, until the door zipped open and she found herself face-to-face with Jordan Branch, along with his goons, Stuart and Viktor, in tow. She groaned, and Stuart shot her a look, his eyes widening.

"Um, yes," she said, trying to force a smile at him. "Sorry, Mr. Branch, I was just returning this to my workshop is all..."

"Why, no problem at all," he said. "We were just working on a few things down here ourselves, burning the midnight oil, as I see that you are doing as well. By the way, how is old Will doing?"

"That's good." The smile he bore resembled that of a reptile, not a man. "I heard his lovely girl Jenna sing tonight. There really is a future for that one, I believe. Shame, though, she truly seems attached to you two."

"She's a good kid. I'd hate to see anything happen to her, Mr. Branch."

"Oh, as would I. She told me about Will's temper, although she downplayed it a bit. She's very talented, you know, those lips of hers could drive a man wild."

"So I've heard." She was still pinned in the elevator, Viktor's foot planted in front of the door, keeping it open.

"We have a responsibility here at Branch Tower to make the best use of our resources we have at our disposal. While her companionship to Mr. Farrington is quite useful, I'm afraid there might be better ways to utilize her talents. Speaking of," he looked down at her hands, "you created Mr. Farrington's, erm, contraption, did you not?"

"Correct," she said, waiting for the inevitable.

"Quite fascinating. In fact, Stuart here was just explaining that to me. I had thought Mr. Harrison—you know him as Bill, I presume—had worked on it, but no, Stuart explained your talents to me."

"Just doing my part." She shot a glance at Stuart, who turned away from her. "I wanted to help Will, is all."

"You were an engineer of some sort, correct? That took some ingenuity."

"Yes, well, not mechanical or anything like that, aerospace. Not much use for that here, I suppose."

"I suppose not," he said, tapping at his chin. "Although you have adapted these talents well. Maybe we should utilize these talents better, don't you think? I'd hate to think of one of the premier minds of our troubled time wasting away as a simple fucktoy for some brute, eh?"

"With all due respect, sir." Rage bubbled up in her. "I'm nobody's 'fucktoy,' I'm the one keeping him alive out there. Jenna was the… what you'd call 'fucktoy' that you gave to him. I came with him. Stuart can vouch for that."