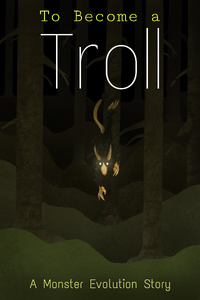 To Become a Troll: A Monster Evolution Story

Thrust into the supernatural world of the deep forest, Paul finds himself in a situation where he could find himself prey to pretty much every other creature and animal around. If he's to survive, he must shed his weak form to grow stronger and survive.

But the forest is full of creatures beyond human understanding, that act without the need for food or shelter and that seem to exist for the sole purpose of dragging humans to the bottom of a murky river. Is it really possible to kill such creatures when your only strength is physical prowess?

A monster evolution story based on Swedish creature mythology. The focus will overwhelmingly be on the progression of the main character and his slow increase in strength. Although many of the creatures are based on Swedish creature mythology, I have taken creative liberties in order to ensure that evolution lines and the such are in line with the usual.

The main thought I had when going into this is that I want to delay the "meeting a human" section as much as possible. My plan is to get him to endgame levels of strength before even sniffing the possibility of seeing a human. Whether I'm actually able to do this remains to be seen, but I'm holding my thumbs!

Also, I'm aware that there are other troll evolution stories, but this is unrelated to them. They can do their stuff and I'll do mine, but this is in no way related to any of them.

That said, hope you enjoy it!

Reviewed at: Chapter 12, A New Kind of Body

This story has the piece of progression I seeing the best monster music stories. The main character starts at the bottom and does everything he can to rise up the food chain. When the main character gets his powers they are reasonably on his level and doesn't give him an unatrul advantage. Although he was very quick to the monster mindset I think people underestimate what people do when there are released from the shackles of society. I look forward to seeing how our little monster progresses.