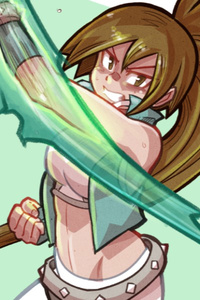 Itzel slipped off her right glove and showed the back of her hand to Janus. He adjusted his glasses and began his examination. “What exactly am I supposed to be looking at?” he asked as he squinted. Nothing seemed out of place.

“Just keep looking.” In the center of the back of her hand was what looked to be an intricate symmetrical tattoo. One long line gracefully curved and looped over itself several times, creating a complex series of sharp yet elegant shapes. The pattern pulsated, shifting from being almost invisible to emitting a faint baby blue glow. “That’s my Implant,” Itzel said sternly. “Everybody gets one the moment they're born. Show me yours.”

“Right.” Janus stared at the back of both of his hands at the same time, checking to see if the symbol would appear. A minute passed without a change to his pale skin tone.

“You know, Implants don’t have to be on the back of your hand. They can be anywhere on your body. Gurk’s is on the bottom of his left foot. Show him yours, big guy,” Itzel said as she gave him a friendly tap on the belly. The crocodile reached down and started to unravel the bandages that wrapped up his foot until he saw Janus shake his head.

“No need to do all that. I believe you. Trust me.”

“What does an ‘Implant’ feel like?” Janus asked, his eyes looking at the back of his hands again.

Itzel paused, her eyes looking upward as she pondered the question. “Hmm. I don’t know. That’s like asking how your elbow or ear lobe feels. It’s just there and you know it is.”

Janus patted his body down. After feeling ‘nothing,’ he shrugged his shoulders. “I don’t think I have one.”

“You have to have one, pal. It’s the law. Everybody gets one put in them the second they’re brought into this world. Well, unless you live in the Outskirts. But since you’re here and not there, that doesn’t apply to you.” Itzel crossed her arms, showing Janus a look of vexation. “How would you even get by in modern society without one? Putting the fact that it’s illegal to roam around ‘Implantless’ to the side, you can’t earn or spend tokens. You can’t access the Network. You won’t have an Identification Code. You have to communicate with people face to face. You’d basically be living like an animal!”

“Gross,” Gurk bellowed from behind.

“Back in Oregon we don’t have… er… Implants,” Janus replied nervously.

“So I guess Oregon must be some part of the Outskirts then, huh?”

Janus nodded while feigning a grin. “Sure. That sounds about right.”

“So what’s an Outskirter doing all the way out here in the Refinery Sector of Labrisson?”

“You don’t say,” the woman said as she rolled her eyes.

Janus’ phony smile quickly turned into an exasperated frown. “Perhaps it’s best if I get straight to the point and tell you the truth. But you won’t judge me, will you? Regardless of what I say?”

“I just saw you get beat down by a few Lurkers. It’s not like you’re on top of the world at the moment, you know?”

“Right. Yes. Well then,” Janus took off his glasses and began wiping down its smudges with the bottom of his shirt. “When I say ‘I’m not from here,’ I mean I’m not from here. As in not of this world. At all.”

“Yes, I suppose that’s an adequate comparison,” Janus said as he put his glasses back on his face. “Does that sound absurd to you?”

Itzel nodded. “Yeah. Just a bit.” She raised one hand and pinched her pointer finger to her thumb.

“That’s what I figured. I’ll save you the explanation then. Let’s just say I woke up here and have no recollection of who I am or where I came from. Is that something that you’re more willing to believe?”

Itzel and Gurk looked at one another and then nodded. “Yes,” both said simultaneously.

“Good. Because that part is true. I have absolutely no idea where I am right now nor how any of ‘this’ works,” Janus extended both of his hands and looked around the alley. “And to be quite honest, I am terrified.” Janus looked at the other two, pleading with his eyes silently. Itzel looked unamused, maintaining the same alienating glare that she had prior to what Janus had said. “I’d appreciate any help that I can get right now.”

“It’s not like you can give us anything in return. You have no Implant, so how are you going to pay us? And if you really are ‘from another world,’ Itzel made a pair of imaginary quotation marks with her fingers, “Then it’s safe to assume that you have no Techniques to defend yourself with. You’ll just be dragging us down.” Itzel began walking in the opposite direction of the invisible wall. Gurk remained behind, looking at Janus in silence until Itzel made a high-pitched whistle.

“Let’s get going, big guy!” She waved for Gurk to follow, to which he promptly obliged.

“At least let me follow you out of this Refinery Sector,” Janus said loudly as he caught up with the other two. He kept their pace, looking at the woman despite her deliberate attempts to avoid eye contact. “So that way I can get to the main part of the city. I’m sure I could figure out what to do on my own from there.”

“Sorry pal. Once you start doing stuff for free, everybody starts expecting that price. Besides, leaving the Refinery Sector is easy. Just a straight shot ahead and you’ll be fine. That is, if you can deal with the Lurkers and other Essencima that roam around here.”

“Please!” Janus leapt in front of Itzel, obstructing her path as he put his hands together like a beggar. “Just let me follow you!”

Itzel stopped in her tracks and raised her right fist. “Don’t make me knock you out! How are you going to run away and cower in fear if you’re laying out cold on the sidewalk?”

“I can’t even deal with a Lurker! How am I supposed to take on the deadlier creatures you were talking about?”

“Just move!” Itzel lowered her hand in preparation for an uppercut. “Don’t make me—" Gurk then stepped beside her, placing one of his scaly hands between her and Janus.

“Help?” he said in an inquisitive tone.

Janus shifted his attention from Itzel to the crocodile. He took a step closer towards Gurk.

“You’re too soft, big guy. We’re not volunteers for a charity, remember?”

Gurk looked at Janus; his body was still trembling as his wide-open eyes darted between the pair. The crocodile gave him a pat on the back, sending him stumbling forward.

“Scared,” Gurk said with a growl.

“Yeah, he definitely is. Your point?”

Janus nodded and gave the crocodile a pat on his back in return. “You should listen to your friend.”

Itzel rolled her eyes. “Fine, Gurk. Whatever gets us out of here sooner. He can come with us. But only until we make it to the main part of Labrisson. That’s it, alright?”

The crocodile nodded. Itzel’s eyes then cut towards Janus, her finger pointing at him mere inches away from his face.

“That’s it, alright?” she said, this time louder. Janus nodded as well. 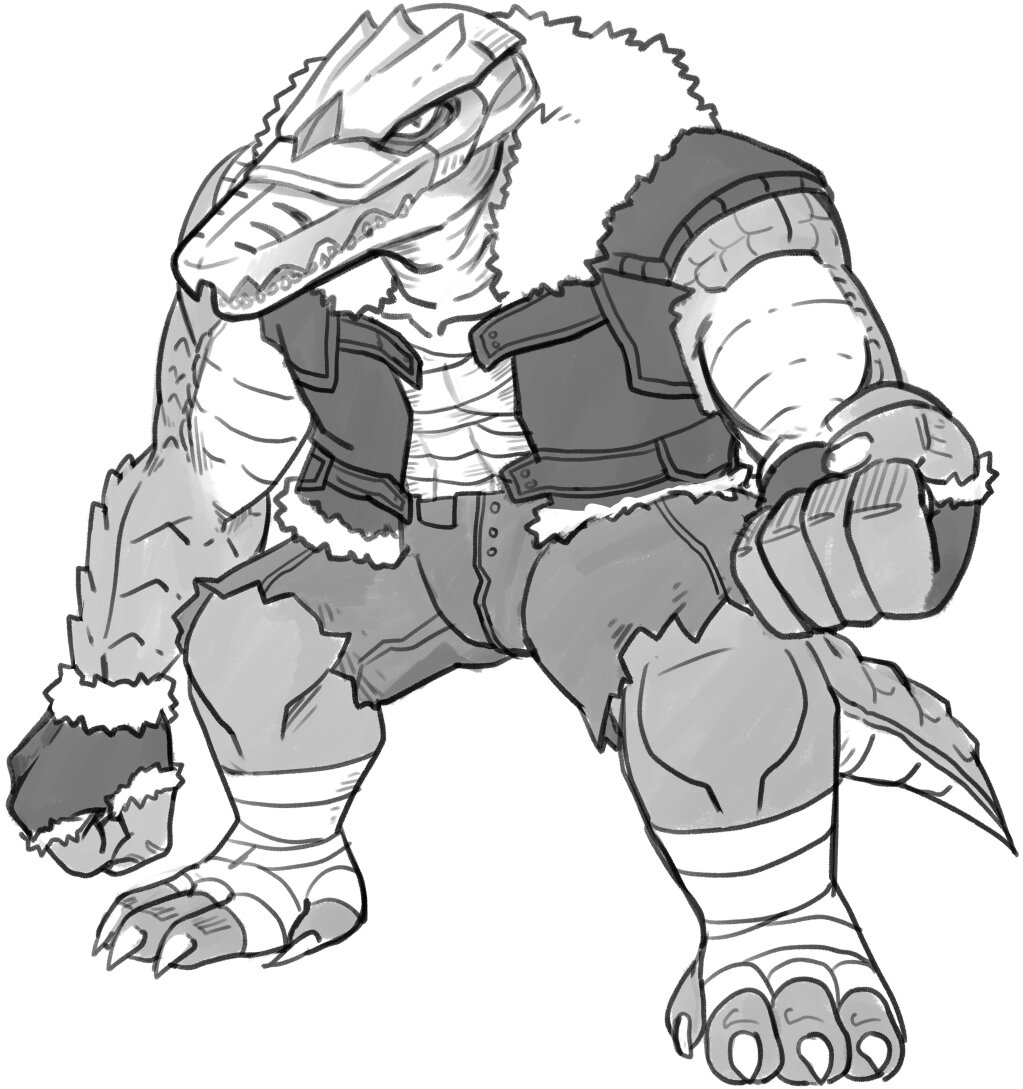 Sour cream and onion for me!

Awww, Gurk is like am overgrown puppy in a body of a crocodile. That's what I see at least. I love Gurk! The picture really adds depth to your character!

Gurk is everyone's favorite it seems.

The building up of this story is very good. I like where the story is heading. Excited to read more!

Gurk is a true bro

That's quite a leap of logic.
I get it he woke up in that bizarre place without recolleciton of how he got there. But to assume it must be a different world? There gotta be some other possibilities he'd consider before jumping to such conclusion with certainty.

To be fair, he did just get attacked by shadow monsters, ran into a force field and had a conversation with an ice-breathing crocodile.

I would think it's a virtual reality, aliens, hallucination, afterlife....many possibilities other than isekai.

I thnik aliens, aftelife, virtual reality, hallucinations are more realistic possibilities than isekai. After all, "other world" is just a genre of fiction that got popular in recent years. Meainwhile, people believed in aliens for at least a century, and billions of people believe in all kinds of afterlives, even though they never saw them.

There is also a possibility of trueman show kind of situation, or matrix kind of situation, where the previous setting is fake, and this one is real. Last but not least, being stranded in--let's say different world-- would make person first and foremost question their own sanity "what if my memories are fabricated, and this place is real? what if my previous indenty is a lie?"

Hey the MC doesn't have to be ultra logical, it's a story not a thesis

Itzel slipped off her right glove and showed the back of her hand to Janus.

Not sure if I mentioned this the first time. Though, for some reason, I was expecting her to bitchslap him. 😂

That would have been an awesome twist!

this setting is very interesting

Thank you! Spent a decent amount of time planning it out.