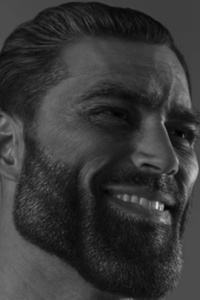 I am Titan Maximus Chadman, the seventh head of Alpha Cultivation sect. I practice the Dao of Chadness and cultivate Big D energy. To grow my powers, I must be alpha in every situation.

Now that foreign cultivators have taken over Earth, I may be modern civilization’s only hope.

Reviewed at: Origins of the Seventh head of Gigachad sect

This is one of the funniest things I have ever read I am dieing to see more . You can tell this is a labor of love every sentence is masterfully crafted to have rolling on the floor . The lack of spelling mistakes makes it extremely easy to read .

Only the Gigachad can save us

Reviewed at: No Ambulances in the Apocalypse

Really loving the story. No hate, no bashing, just pure Chad magnificence in display. Coupled with the fact that the world is getting overrun by cultivators from different worlds, who are very invested in conquering and subjugating the mortal for their own benefit? In such dire times, only the Gigachad can save us.

Doesn’t take itself too seriously

This has no right to be as good as it is.

All for a meme?

worth it. The journeys of the Gigachad sect will surely overcome all of the virgin Qi cultivators through the power of Big D energy.

the squirrel is pretty cool too

This is a true comedy

Reviewed at: This One Syndrome

As my title said, this is a comedic cultivation novel and not a Cultivation novel with some comedy on it, so don't expect it to take itself too seriously most of the time.

That said; the grammar is near spotless, the idea of cultivators invading earth as an alien force is painfully underussed, the "Alpha" cultivation system is amazingly well planed, for how clearly satirical it is, and It's good fun, with many epic scenes and all around very sastisfying.  We even get some solid life advices down the line, with our good natured Alpha Main Character.

I am already looking foward to more.

I am making this into an Advanced Review now that I have chapters to base in on, and because I want to give an extra push, so here is more in depth for each category:

STYLE:  Omniscient third person Narrator, but with limited commentary and mostly from the point of view of the MC. In this particular case, the voice-over type of narration fits really well with the general feel of the Novel, that would repeatedly pull the most ridiculous of things with a straight face, so to speak, and not lowering the stakes at play. Despite being rather funny and light-hearted, it does have drama and well choreographed action, which flows really well in the middle of the irreverent situations.

STORY: As I said above, the Idea of Cultivators as earth invading aliens is painfully underused; If somebody that has read more than me wants to point out how that's no true, they are welcome, but in hundred or so Xianxia novels I had read, I never saw something quite like this (novels about Litrpg,  "System integration" and "System monsters", non-withstanding, since its a genre of its own and not the same we see here) I went into the novel curious about the outrageous premise, and I am now looking forward to learning more about the world and basically accepting that Chad cultivation is as valid as any other. As I touched upon on Style, the story managed to kept, at least for me, a weight to the plot that might had seem impossible to implement while also keeping the comedic tone as the protagonist of the novel. It often feels as several different novels clashed and are trying to deal with each other.

CHARACTERS: While I am giving this a 5 star scores, because the characters are really interesting with their own quirks, the cast is varied and with their own motivations, and the MC is lovable (and a Chad, needles to say), true be told there are too few chapters so far to see the depth of all the side cast. Regardless, I think that's not a weak point of the story at this stage, but rather the lack of space with how much the world is being fleshed out, the action taking the spotlight frequently, and the backstory of the MC taking front line. To the point I had read, you can tell the author probably have planed biographies and motivation for most side-characters, which will come in play as it becomes more important to the plot.

GRAMMAR: The Grammar is solid; a few typos here and there, but the author is always ready to correct them and I had yet to notice something that ruins the flow of the story. Some people are a bit more sensitive to this than me, but I at least can say it's really good for RR.

A book, with a MEME as part of it's main plot is obviously going to be funny, the Chad meme no less. The jokes are said completely seriously and with a straight face, and you kinda just grin as you read through it. 100% worth checking out. Not many chapters out yet, but it has a very clear struggle and goal, and is just flat out fun to read

Quite possibly one of the best novels on this site

Reviewed at: Origins of the Seventh head of Gigachad sect

So many words could be used to describe such a masterpiece, so I'll try to keep it short. It's perfect. The grammar is impeccable, the story flows well, it's incredibly unique... the list goes on. Kudos to the author for creating such a masterpiece.

TL:DR - It's a beautiful symphony of words.

I never thought I'd find an accurate novel on the upbringing of true Chads. Even I was left in awe regarding the Main Chad's grindset. An amazing read that gradually increased my Big Dick energy as I learnt more about Titan and his masculine behaviour. I recommend it to everyone, as I believe even the truest of Chads might find something worth their time in the Gigachad teachings. With some luck, even virgin internet dwellers might be inspired to embark upon the Dao of Chadness. Such is the ability of the Gigachad sect's seventh leader.

I shall continue being an enjoyed of this Alpha Cultivation novel, a star among the many Virgin Xianxia novels.

I rate this novel as: CHAD APPROVED

what a work of art. created an account just to type this rewiew. masterfully crafted, my good sir. may your days be blessed by the will of the alpha cultivator. this sentence is only here so that i reach 50 words so i can submit this review.

Best parody I’ve read for a while.

This story is funny, and well thought out. The main characters alternate parody cultivation style is great, and makes internal sense. Honestly a better thought out power system then many serious novels.

I love that it's set in an insane asylum, and the author has been pretty respectful in showing metal illnesses dispite the stories comic nature. Overall a great fic.

Easily the best xianxia parody I have ever read. But the best part is, that when the novelty of the novel leaves you, there's still a solid story underneath.

The story starts with a bang as aliens extinguish what makes us, us. Watch as the man sets out to save whoever he can and return the fire of hope to humanity. Filled with profound characters and with wit sharper than a Chad's jawline, it promises a thrilling ride to all it's readers.