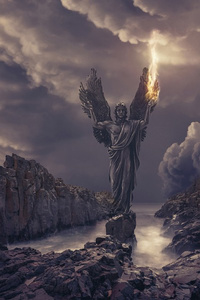 Atuel ran to his destination, goal clear. The benefit of always sitting unseen and slinking in shadows was the talk you would hear about passing by. He had heard of a foriegn smithing master from a distant land.

That was someone who probably didn’t even know what a witch was nor would they believe in such lies. Or that was what he hoped. He needed a weapon of some sort, this was the best chance he had.

The hawkers and peddlers were all thieves, they could not be an option. They had the same look to their eyes as the thugs and largest merchants had when they swindled the poor or got one over a muscle bound farmer. He was not about to sell his soul for a rusted wooden knife.

He watched for the entrance to the smithy from a distance hidden in an alley. People filtered in and out every once in a while. Only when the sun started setting did he find a span of time he could rush in and beg the foreigner for a weapon to buy.

Atuel had hidden quite a few smaller denominations of coin. He hoped his small pouch had enough in it to buy something decent.

He speed walked in, looking over his shoulder until he was fully in the building in an angle where others outside would not see who he was. The first thing that hit him was the heat, it forced him to backpedal and curse his failure of a cultivation.

Wasn’t he supposed to fly? At the very least stand his ground against something as simple as heat! Right?

But, no, he hacked his lungs and eyes teared up as he crashed into the wall behind him.

Distant, he heard voice laugh, then a shout of anger. Others cried out, but Atuel could not understand.

His blurred eyes only saw a figure rush him with a glowing stick, swinging it at his face. Atuel instinctively fell to the ground and rolled into a ball protecting his body as much as possible.

Most things tried to either get him between the legs or the head. That was their go to spots, as long as he protected it, he was safe enough. A few bruises and beaten bones would heal, a cracked skull wont.

The hit never came. Atuel waited, but the pain never lanced out like usual. Instead, he looked up with eyes a bit clearer only to see a head full of red. He gaped like a bumpkin, whatever that meant.

The massive man with wild red hair and beard held a burning hot rod of metal in its spot, another tried to slam it onto him.

Atuel paled. If that had hit him, he would have been disfigured for life. Everything he was facing now would forever be with him. The marked men and women never had normal lives. No, most lived their just like he and his mother did.

“Devil Spawn?” the foreigner said with a heavy accent. His eyes were wide like it was normal for him.

Did his eyes crescent when he ate good food, was the second thought he had. His mother’s eyes did, so he copied her.

The man threw the attacker to the ground with sheer strength then looked him up and down. “Don’t see the horns. His skin is not the right shade. Is there a different type of devil spawn in your country, Zhu Wei? Never seen one that wasn’t killed on the spot.” he laughed.

He had made a joke, but no one understood what he meant. The man waved them off after he was done.

A man appeared from the back of the group. He stared down at Atuel from a raised chin. The condescending look drove nails in his chest, but he kept it in, he was here for a goal.

“No, Charlie,” even the name sounded completely different. “The Devil Spawn dare not to raid this far South West. This is an outcast, we should not have anything to affiliate ourselves with such filth.”

Charlie, the red man, started prodding and poking Atuel with interest. Much to the boys displeasure. But nothing he said or did could prevent those snaking fingers from grabbing his nose, poking his side, stretching his mouth.

“Don't seem that bad to me. Too clean to be filth,” he pointed at Atuel’s teeth, his mother would skin him alive if he didn’t clean up. “Them teeth are as white as snow.”

“Yes.” Zhu Wei said with exasperation. “As I said, an outcast. The previous son of the city lord, before his witch mother plotted to kill the Old Madam and the Saintess, current head wife.”

“Is that so?” Charlie said, cleaning his hands with a rag hanging from his waist. “So… doesn't that mean he technically outranks you?” It was impossible to hide the mirth in his voice.

Zhu Wei grabbed the hilt of a blade on the counter next to them. His threat was silent but quite clear.

The red man laughed, loud and boisterous. He extended his arms in an inviting gesture.

Atuel only marveled at how far his reach was.

For a long tense moment, one of them was probably going to die. In the end, Zhu Wei only spat at Atuel and released his grip on the sword. The man was content just glaring.