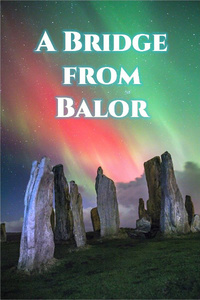 Rain beat against the windows of Lady Bremmen's parlor. Farrel listened to the rain's drumming and sighed contentedly. His belly was full with a splendid meal, his stockinged feet warmed by a crackling fire. His good friends—Valin, Glenna, Sontoral and the Lady—sat near him in the glow of the fireplace. Best of all, his darling Kerrawyn nestled on his lap.

“This weather is ample reason to delay your journey,” Lady Bremmen said from her seat beside Sontoral. “I have spoken with Starling, Badger, and Hare. All confirm that the bridge from Balor is destroyed. My friends, you have no need to hurry home.”

Her amiable glance traversed the room, and found no disagreement among her guests. Chilled and weary, they had arrived the previous evening from the Hall of the Danaan Kings. Since then the wet, blustery weather had not changed.

Crossing the forest, Farrel and his friends had been amazed to find March buds on the trees and the yellow gorse in bloom. It was Valin who surmised the explanation. Time had moved at an unearthly pace, not only for the travelers in Balor, but also for the others who, bound to them by magic, awaited their return in Torth-haven. While for them eight days had passed, four months had elapsed in the outer world. The Earth had come through the long darkness of winter and emerged into another spring.

Farrel felt some concern over what may have happened in Tronwall during his long absence. It was never wise to leave the land for long without a chieftain. Still, winter was normally a quiet season, and Keven the steward could be trusted to look after his master's affairs. And even if some usurping neighbor or cousin had heard of Farrel's absence and petitioned the King of Ulster to have his place .... Well, the king was a cautious man and slow to honor such requests.

“I do need to return to Tronwall soon,” Farrel said, thinking of the sad news he must confirm to Lecan’s family, the funeral rites to arrange. “But I suppose I can wait another day or two.”

Valin stretched lazily and addressed Lady Bremmen. “In that case, dear lady, perhaps we will take advantage of your bountiful kindness for a while longer. I appreciate your sharing the reports of your animal allies, for they verify what I expected to be true: the threat is passed.”

“How can you be sure?” Sontoral said.

“Because of the nature of the Tree of Beginnings,” the druid asserted. “Neeth-Mirall will grow and spread across the whole of Porteas’ island, changing the air and soil to a form inhospitable to the shadow folk. Porteas’ tribe will be driven to seek refuge in other parts of Balor. Denied the magic of their sacred well, which was in fact the power of Neeth-Mirall transformed, they will be forging no more bridges to other worlds.”

“Then we have accomplished what we set out to do,” Sontoral observed. “And we are all together, safe and snug. My joy would be complete, except that I am worried about Aidan. She has hardly spoken since your return, and will not say what happened to her in Balor. Yet it is plain she has gravely changed, become self-absorbed and nervous. That she has stayed in bed this morning is only one more sign.”

Farrel and Valin exchanged sober looks. The others stared at them, in sympathy with Sontoral's concern.

Valin gazed into the fire as he replied. “Aidan told us everything as we made the passage between the worlds. I have mentioned already that what we accomplished was mostly by her doing. The role that fell to her needed the greatest sacrifice and courage. It required both that she drink the wine of Balor and shed its blood. Both deeds, by their nature, bound her spirit to the shadow world.”

“And what does that mean?” Sontoral asked.

Valin gravely met his eyes. “That for a time she will be fey—distracted and preoccupied, as you have found her. But there is no reason to assume permanent effects. She is safely back in our world now, and I, and Glenna, and Kerrawyn all know ways of healing the spirit.”

Glenna nodded. “We will help her, Sontoral, never fear. She is our sister too, you know.”

The harper could not help but smile. He sat back, the tension leaving his angular form. “And what will this family of ours do, now that the bridge from Balor is no more?”

“Why, return to Tronwall,” Farrel grinned. “And dwell together in the family hall.”

“Yes,” Kerrawyn raised her head, wearing a look of delight. “We will spend the years to come together, developing our arts and talents. There is much we can accomplish.”

“For the benefit of our people,” Farrel declared, “and our mutual amusement, of course.”

Aidan heard their laughter drifting up from the chamber below. She sat rigid on the bed, staring at the dreary paths the raindrops wove on the window pane.

Her friends’ laughter made her cringe inside, their mood of relief and celebration almost unbearable. Aidan could not esape the feelings of doom that possessed her, brought on by the future shown to her by the Priestess of Balor.

How easily all hope and joy could unravel and turn to dust.

Valin and the others had tried to reassure her: her feelings of loss and grief were lingering effects of what she had suffered in the gray world, the visions shown in the mirror likely mere illusions created out of hatred and spite. In time, with their help and support, Aidan would be healed, returned to herself.