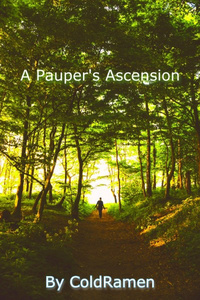 Some men fight for glory and power. Some for love. Even more still fight for wealth, fueled by greed.
Torrin Sesh was always one to fight for honor, spurred by a motivation to make his father, Duke Torrillen, proud. And proud he was; Torrin was the youngest person ever to reach the rank of High Warrior and had a bright future ahead of him... Until he was murdered.
Torrin finds himself in another world, one fueled by magic and mystery.
Did he come to this world for a purpose? Was it random dumb luck?
Torrin's death was the start of his adventure.

This is a good progression and revenge story. The story's good, the characters are good. It has fairly interesting worldbuilding.

But it feels really arranged. It feels like every single thing that happens just gets fed towards empowering the MC. This is often the case with xianxia/progression type stuff, but this story, I don't know if it's the actual plot or the way it's written, feels incredibly flat, floaty, without substance.

The characters as well, they're sort of flat. They're defined, so they feel distinct enough, but they feel artificial. The MC gets some kind of character development, yes, but it feels he just changes as time passes but for no specific reasons. Maturity or character development could realistically happen like this , but again it feels arranged. It could be happening off screen, but... Yeah.

My major complaint has to be elemental magic. If he was just going to "intuitively grasp it", why did he even need to go meet the elves? But again, the issue is the same, it was arranged for him to need to go to the elves.

HOWEVER, it could very well be that this is a feeling I get, as I can't exactly explain where I get it from. If you don't get this unsettlingly flat feeling from the plot, it's probably an amazing webnovel.

If I had to sum up whole story then this story has its highs and lows.

One of the strongest points of this story is plot building. The reader will get new information gradually as well as MC and other main characters that will change the way you can look at presented story.

The world building is also well done. Especially history of universe/multiverse and connection between worlds make it believable (including Earth).

Grammar is good but I am not native English.

What I really do not like is Rin. He is insufferable character. I won't be describing how quickly he becomes over power and how lucky he is, because it was predictable, but his behaviour.

He gives money and very generous gifts left and right. That would be tolerable but author dared to call this story “A pauper’s ascension”. He has been poor like for 5 chapters long and after that he has more money than he can possibly use. His gifts also are inproportional to help he recived like 100:1 or 1000:1 if not more.

I also do not like over the top polite interactions between MC and important people (kings, queens). He practically oozes politeness.

There was also one scene where king was over apologising to him. Kings can apologise but they can’t go almost 'dogeza style' apologize to anyone. If any king or queen did that, it would ruin reputation of whole country. At least that is how I felt after reading this fragment.

Just binged all of it in one day.  It's amazing.  It's isekai done right.  It also has an interesting twist on the xianxia genre. The main character is just the right amount of OP and his "master" gives Eitan vibes from Cradle. Meaning that they're the comic relief but also insightful.  Just do yourself a favor and read.