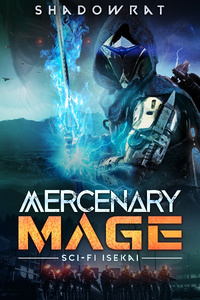 PROLOGUE 00 - GODS AND THE FORCES OF THE UNIVERSE

Remove Ads
Next Chapter
A note from ShadowRat

This is a Reverse Anti-Isekai that is written from the opposing aspect of a Mage being sucked into a Sci-Fi setting.

This prologue is meant to set the stage, such as a Narrator prior to a curtain rise.

I hope that you all enjoy my fiction!

PROLOGUE - GODS AND THE FORCES OF THE UNIVERSE

The gods were brought into being by higher powers to serve as custodians for the universe. Assigned tasks, purposes, and responsibilities were to maintain their areas and ensure that the Balance was kept.

When not performing their duties they often played games with one another. For power, for prestige, to ward off boredom. These games are often times highly structured competitions. The Rules lain out in advance, agreed upon by all parties.

After all, what fun would it be to cheat?

The gods are close enough to being eternal that these games can be played for dozens of millennia if limits are not set.

Countless worlds and mortal beings can be wrapped up in games so large that a dozen generations will live, propagate, and die off before a single move is even contemplated by these higher beings.

And so, the games are played. Oftentimes with disastrous and fatal results for the mortals within their confines. The lives of mortals are of no concern to the gods after all. Why would a boot concern itself with the ant?

Why would gods kill each other for power after all? Not even a god can perform all the actions that take several of their kind to maintain reality. And even if they could, it was more fun to play their games.

As reliant as these beings are on one another, there stand two that exist outside of the Design as a whole. Two that observe from a distance, maintaining the very fabric of reality and the existence of these gods by their mere presence.

These two entities are parts of the same coin. Neither front nor back, but intertwined on such a level that none but themselves can comprehend their relationship.

One whose purpose is to bring about life, being, and continuance.

One whose purpose is to bring decay, death, and an ending.

These two have existed since a power even above themselves brought them into being and gave them a single, all-consuming command. A single edict that was marked into their very structures. A single Purpose.

Balance this universe and all in it.

The gods have played their games for an unfathomably long amount of time. Existence and Entropy have balanced their actions, ensuring their actions did not unbalance or destroy the natural cycle.

However, the god’s games grew in number and in frequency. Existence and Entropy found themselves stepping in more and more often to correct the balance that was the result of their immature actions. Whether the gods knew it or not.

Existence and Entropy began to become frustrated with their dismissive actions, the games that caused so much damage to their Design. To their Purpose.

And then, the gods made their mistake.

Their games had become boring, monotonous in their scope and scale. And so, they gathered together in a great Moot to discuss this problem, forsaking their responsibilities and roles.

This great Moot of the Gods came to a single conclusion: The Two higher beings were restricting the gods to the point their games could no longer continue. So a decision was made.

A decision so heinous, so blasphemous, in the eyes of Existence and Entropy that they had no choice but to step in directly when they discovered it.

The gods rebelled against their purpose. They assigned their own roles, responsibilities, and projects. They split the universe asunder. Tearing it into Realms in order to start their Great Game. A game of survival, with stakes that had never been wagered before.

The god’s war against the balancing forces of the universe started ...

... and the tapestry of Existence and Entropy began to unravel.

11.11.2021: I got a lot of feedback from you all! Thank you so very much. I Have completely re-writen the Prologue to make more sense. please, let me know what you think!

Bio: I live in Washington State with my wife and 2 year old son. I love to read, write, and discuss literature in all of its forms. It can teach us so very much. When I am not reading, writing, playing with the fam, or working, I enjoy cooking, reading science updates, and being alive.

Existing existences. The world begins to define itself!

Very interesting start! Looking forward to where this goes

Can't say I've read such a unique start before, definitely had to think through this one

Thank you! I hope you enjoy the rest too!

And with that, I'm hooked! Thanks for the story!

And thank you for reading! :D

Very interesting prologue you have here... It kind of sounds like the narration at a beginning of a sci-fi action movie or something.

I did not read your previous prologue - but I absolutely love this version.

Thank you Nina! After a lot of feedback I made the decision to re-write. I appreciate your feedback, and thank you again for reading!

This is something I often like to think about. The concept of self-existence through entropy and eternity, perhaps even a simulated reality (which I've grown more and more fond of believing) and the potential illusion of gods and our interconnected web of consciousness. It actually inspired me to write Reach: The Spiral. There's something highly fascinating about existence that, the more I look into it, the more I understand that it's all a matter of magic, of something that goes beyond logic and design and instead banks on a quantum system of complete and utter randomness.

"The gods rebelled against their purpose. They assigned their own roles, responsibilities, and projects. They split the universe asunder. Tearing it into Realms in order to start their Great Game. A game of survival, with stakes that had never been wagered before."

In this multiverse, there appears to multiple gods. Is there a "one above all", so to speak? Is the realm of the gods connected to the universe they'd split? Is this quite literally a game, or is it merely nominal?

"Balance this universe and all in it."

Who gave this law? Is there a reason for its specific detail?

I suppose it all dies down to, "Why is there something rather than nothing?"

I have high hopes for this work.

Haha you caught me! yes, there is somsething you may consider a "One Above All". However, it is not quite what your thinking of. Not do drop any spoilers, but your on the right track but in the wrong mindset :D.

Existence and Entropy are ... not as complex as they may seem.

Thanks for the read and the review! :D I am glad you are liking it so far.

Now this is a hook! Oh boy I havent felt this interested by a story in a hot second.

Existence and Entropy found themselves stoepping in more and more often to correct the balance that was the result of their immature actions.

Fixed. Thanks for the comment! I am glad you are enjoying it.

I really like the idea of a mage getting sucked into a Sci-Fi world! Has a lot of potential for a unique story.