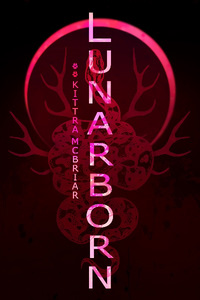 Once she was the Tyrant Empress. The one who made rivers run red with blood. The one whose name was poison to speak.
But now she’s been Reset, her memories broken, her power lost. Reborn under the night sky into the Realm of Solastrad, where time of birth is everything. As a Lunarborn in a world ruled by those born under the sun, Vi is forced to depend completely on her new Solarborn master. For the blood she needs to survive. For shelter. For protection from the people who hate her for what she was—the people who remember. But there’s more to General Khavad than the rumors whisper, and he wants more from her than just the physical energy he feeds off of.

As Vi struggles to figure out whether her new master hates or loves her, one thing quickly becomes clear—of all his weapons, she’s the deadliest.

Book of the Many Realms 1: Lunarborn

Cover design by me