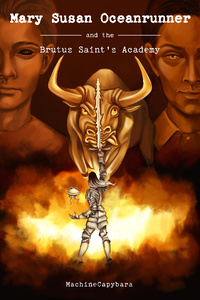 Episode 73 - Silence before the opera

Kicking the confused Viking out of her room was relatively easy. Getting back to rest was not. Despite all the problems, Mary really preferred the old way of communication. Hmm... maybe she could get a talking parrot to keep in her room? she wondered if Veritas could work with that.

The rest of the night passed much more eventlessly, so she was already getting bored when the courier delivering an invitation knocked on her door. Paolo, who was housed just a door away, seemed still a bit miserable after the awakeness marathon. He still had the bloody armour on. Did he sleep in it? Could he even keep it armoury at night, or did it just turn itself into a pool on the floor...? Whatever. They had more pressing issues at hand.

The audience hall was filled with a mixture of people like before. The difference was that this time, there was also a pile of various thingies lying in the middle - bottles of some white stuff, bottles of weird things, large eggs, packs of flour, jars of honey... It should have looked normal at best and ridiculous at worst. But somehow, Mary felt a sort of reverence surrounding all those groceries - and judging by the tensions and solemnity she felt in the air, so did the others.

“So, as you see, we have everything,” Arthur gestured towards the pile. “I'd like to especially thank our fast-timers, without whom we would have never been on time with the dragon breeding.”

Mary could hear a bunch of familiar people with broken watches grumble under their breath something about idiots, timetables and reasons behind the rules. Arthur either didn't or - more likely - let it slide. Unless Mary was much mistaken, he pretty much agreed with every unheard word.

“So, since we have everything we need, let's talk about fulfilling the prophecy. Does anyone have a valid reason not to do it as soon as possible? And to clarify any doubts - no, galactic basketball third league's final match is not a valid reason.”

There were a few groans and curses thrown around, but apparently, no one had any convincing objections. Mary noticed that Paolo kept looking away from the meeting and towards Nicolaus's remains, or whatever it was that Arthur kept locked in the wall. She tried to imagine how it would feel if it was someone else - someone closer to her. And then, she immediately tried to stop imagining it, which turned out to be much harder.

Yeah, she wouldn't be over it so soon either. Looking at it that way, she was glad that Mortimer had just died completely and went on the path beyond.

“I can't hear any objections,” Arthur continued, looking at everyone in turn. “I'll let Frank know he should begin the preparations. Please take a copy of the songbook with today's chants on your way out, and I expect to see you in the northern public forge in an hour.”

The word 'songbook' would suggest songs, and those tend to contain lyrics. Well... the packet Mary received contained maybe three words in total, those being 'a', 'o' and 'm'. The musical notes, on the other hand... back in the orphanage, she attended some obligatory lessons on music, but it was not enough to prepare her for this. The symbols denoting the melody could have just as well been some ancient runes for all she understood - at places, she couldn't even tell from which angle she should have been looking at them. And what did it mean if the lines themselves looped?

And after all that, there was one more teeny-tiny little problem. Mary still didn't have enough control over her shadowy voice to pull off anything even remotely close to singing, much less this. Hm... on the other hand, if it was some scribbles left by an eldritch abomination, then maybe her 'voice' would be perfect.

Anyway, when she arrived at the room she was directed to by the maze, she was struck by a strong sense of Déjà vu. The place looked like an amphitheatre carved into the sandstone at a very steep angle so that most people could have a good view of the scene. But here, the scene was occupied by Frank in his green rubber gloves and pointy hat tinkering with some device. It had a lot of gears, chains, and glass pipes leading from one part to another. The ingredients were already lying around, prepared for the action.

In front of all that stood another man, dressed in a black suit with red lining and a perfectly ironed white shirt. He was toying with a music stand, stacking more and more sheets on top of each other in a way that had no real chance of surviving the slightest breeze.

Soon the room was filled with people, and Mary standing in the corner had little room to breathe. It was really fortunate she didn't need to do so anymore, and really unlucky that Paolo next to her did.

“Okay, everyone, let's get ready,” the elegant man said. “And remember - we want this to be fun. So if you think that your singing will ruin said fun, feel free to shut up.” Well, at least she wouldn't need to sing, so there was that.

He produced a black baton in his right hand, then a white one for the left, and then red for another right hand. Mary blinked. In a few seconds, the man was sporting six arms, three of which held batons.

“Doctor Frank, are you ready?” he asked, to which Frank nodded.

The man gently struck the music stand a couple times, by some miracle managing not to disturb the papers. “Aaaaaa,” he intoned highly and let the echo resonate around the room. “On three. One, two, three.”

Frank pulled down the largest lever.