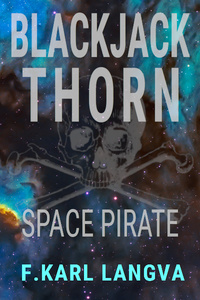 After a good night’s sleep, the three got up and went to the galley to get breakfast. They met Finn and Barrington enjoying coffee together looking at the news feed they picked up from Campalis before jumping. Campo went over and got some oatmeal in bowls for the three of them.

“Barry, would you help Gnuto out to find some of his family history. He thinks maybe getting more info on his Uncle Mac might work.”

Barry responded. “I’ll need a start. Mac isn’t enough to go on. Do you remember his full name Gnuto?”

“Still pretty slim. Do you know anything about him?”

Gnuto ate a bit and answered. “He was a soldier. He’d mumble in his sleep sometimes.”

“That’s better, Was he one on Campalis or somewhere else possibly?” Finn asked.

Gnuto thought a bit. “I don’t know. He wouldn’t talk about it. He did tell me if anything happened to him to find a Marine recruiting office and show them my necklace. I don’t know why, there’s nothing on it, just a figure.”

Blackjack asked, “May we see it? All of us were in the military for some time. Maybe one of us will recognize it?”

Gnuto fished out the necklace and handed it over to Blackjack who looked at front and back.

“It’s pretty dirty. What do you think Campo?”

Campo looked at it and rubbed it a bit. "It needs a really good cleaning. Finn, would you run this through the ultrasonic cleaner in the armory when you get a chance please?"

“Sure thing boss. I’ll take a bunch of images along the way so we can all look at it. Maybe someone will recognize the face. Let me go do that now. Should take a few minutes.”

Finn exited the common room as Donni and Josef wandered in.

“Where are we heading to boss?” Josef asked Blackjack.

“The contract said to deliver to Undu Manic. The processing plant there was to get the entire load of thallium cuprate. Anything else was extra for us. The manifest had two pallets of miscellaneous metals. I guess we should pull those out and lock up the cargo container."

Campo told him, “We get a message from someone that requests us to ‘liberate’ something and deliver it to where they want. We don’t normally just pick up stuff without having someone that wants it.”

“Other times we’ll be delivering goods from one spot to another. We just do that kinda under the nose of the cops so to speak. Some people don’t want the government charging them more for their goods,” added Blackjack.

“And we'll do some jobs for our old bosses too," contributed Josef.

“Wow, so you don't just steal a whole ship then?" asked Gnuto.

“That’s more than we want to chew on, buddy. We actually do more work for the Empire than others. We were between jobs and this one filled in some slack time.” responded Campo.

Blackjack told him "There are times the Empire doesn't want anyone to know that they are involved, so we help out a bit. We don't pirate much. This was the first job in two years that we had done. Right Campo?"

“Sounds about right. The last one was that job grabbing those circuits,” he answered.

Finn beeped the comm as they were cleaning up the bowls. Blackjack and Campo grabbed a mug of tea and walked over to the screen.

“Take a look at this medallion folks and see if you recognize the image,” Blackjack asked everyone, motioning them over.

They all took some time looking. No one recognized the image on the front or back. Barry got a little closer and noticed a small chip in the upper left side of the back.

“Blackjack, does that look like it’s a chip right near the mounting?” he asked.

Blackjack got on the intercom and asked Finn to take a close-up of the area. The image flashed up on the screen.

It looked like a small v-shaped crack starting at the edge. When they looked at it more closely, they could see the face didn't go under the mounting that ran around the medallion.

“Finn, does it look to you like the facing is fake?” Campo asked.

“Could be. Let me put it back in the cleaner for thirty minutes or so. That may loosen it up a bit.”

“OK, but please watch it to make sure nothing else gets damaged,” responded Blackjack.

Josef asked, “So Gnuto, do you know how old you are? I don’t remember you telling us that last night.”

“I’m not sure. I think I’m thirteen. We never really celebrated much.”

“We should run him through the school program to see where Gnuto’s at,” suggested Donni. She set him up at one of the terminals in the lounge.

Finn called back in less than 30 minutes. “Boss, you got to see this! Let me put it on the screen.”

The face of the medallion was fractured from the cleaning, revealing a gold face under the fragments. “Finn, can you remove the face?” asked Campo.

Folks were gathering around the screen as the false face was removed. Blackjack was squinting at the image trying to make out what it was. “Let me clean it up a bit, guys,” replied Finn.

The cleaned-up medallion was replaced and zoomed in a bit. "That's the Winged Victory Medal!" exclaimed Blackjack. "Finn, did you also clean the back?"

Finn responded by flipping the medallion over. They all looked at it and then at Gnuto and Blackjack. Gnuto looked at the writing ‘Presented to GSgt Augustus MacDougal for bravery above and beyond 1102.10.23’

“What’s wrong?” Gnuto asked after looking around at the others.

“Gnuto, this medal was given to Augustus MacDougal,” replied Blackjack.

“Oh, was that Uncle Mac’s name then?” he asked.

“Yes, but he wasn’t your uncle Gnuto,” Blackjack said.

“Why not? That’s what he told me? He never lied to me!” Gnuto was getting more agitated as he realized something was wrong.

“He wasn’t your uncle Gnuto because he was mine,” answered Blackjack.

Bio: I'm a long time reader that made the conversion to writer. I enjoy most genres.