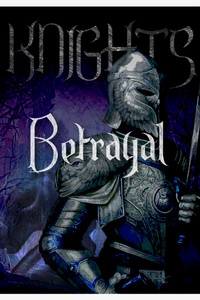 The rusted shackles screeched with a harsh cry. The noise that only he could hear. The blood that had been clot underneath those tender wrists were now red bangles. A beam of moonlight that barged through the solitary window fell on a pair of amethyst eyes. The amethyst eyes were supported by dark circles. The mouth of a boy that reeked of foul stench stretched to form a smile.

The once-lifeless eyes stared out of the window-gap. The lone window that inspired the dead eyes to look forward to the next day now showed a dark forest that echoed with the screams of the dead and bellows of the menacing night critters. His eyes longed for a world, unseen in the last five years. A world where his only family lived. His pride. His…

That only he could hear,

"I'll return home. I will be back tomorrow."

"Wait a little while longer for me…"

Nor the nocturnal creatures nor the boy.

No one slept that night.

The next morning the sunshine bathed the little cell with new grandeur and hope.

The boy looked at the sunshine entering the room through the window. A burst of sunshine that had never smiled upon this cell before, now let the boy bask in its holy splendor. The boy wholeheartedly accepted the sunshine with a big grin.

The metallic gate which had never been opened in five years squealed as if denying, letting to go of their victim. The free shackles fell on the earth heavily. A sound which was more euphonious than any other song to the boy.

A guard prompted the boy with undisguised hatred. The murderer was being let go today. The guard looked at the unsavory and revolting cell which was infested by mice and the stench of turd and urine. He scrunched his face. He looked at the big smile on the boy's face. His smile looked quite genuine after spending five years in that shithole.

But when he remembered of the nefarious deeds a certain twelve-year-old had committed. Even he, a jailer, felt goosebumps rising all over his body.

A tall boy with a bushy beard and long fetid hair that thrashed onto his shoulders stepped out of the prison.

The earlier revolting-looking boy now looked prim and proper. He had trimmed his messy hair and beard, giving him a new fresh look. The face looked excited and enthusiastic. He occasionally skip-walked making the passer-by's eye at him weirdly.

For him had always been a mansion on the west side of the Caez city. He walked through the nostalgic roads. He would halt at times and gaze at places. Reminiscing the great differences between the city he had once seen and the city now.

The name of the mansion he had always lived in. As far back as he could remember this place was the only home he knew. Though the prison had changed his temperament, it hadn't stolen his innocence. He smiled and tried to open the mansion gates.

The gates were locked.

The mansion which looked modern and beautiful one day now stood in front of him wrapped in cobwebs and ruins.

The enthusiastic face suddenly lost its luster and gleam. His face hardened and his expression as murky and bleak as it could get. He could only grit his teeth and walk away. But suddenly he saw a young man walking across the road with an egg basket.

The young man was whittling away at the calm weather. When a large hand suddenly stopped his path and held his collar up. Frightened; He let go of the basket causing today's stock of eggs to all go down the dump. But he was far from worried about that because the man who was holding him with a grave expression on his face looked far more menacing to him than his one day's livelihood.

"What happened to the mansion there?"

The man asked while gnawing his teeth.

"Eerr… It was closed after the death of Late Sir Eugene five years ago—Argh!

Shrieks and screams resounded the desolate valley. The young man later, found himself half-dead in an abandoned valley after a year's worth of pummeling.

With a sudden bellow towards the sky, the assaulter left the alley.

Many young women and men adorned in different sets of armors. Armed with different weapons gathered in the grand and majestic Royal Hall. The people were engaged in making anxious small talks to ease the pressure. Waiting impatiently for the greatest turning point in their lives. The Knight Selection Examination.

Among the young masses stood a peculiar figure in the corner of the room. He was wearing a long dark robe with his hood down. Down enough to leave his face to your imagination. The strange thing wasn't the hood but the fact that no one could detect him. The people around him appeared to have been cast a spell upon. Even if they would occasionally glance at him, they would never approach or even consciously notice him.

But right now, the conspicuous man carried a large grin on his face. His eyes peer deeply at the two knight applicants who had just entered the hall.

The two seemed rather eye-catching too. A red-haired girl with a high ponytail and a soft face, who had an enthusiastic smile strutted forward with a dignified stride. Her armor failed to conceal her bountiful figure which could not get rid of the lecherous eyes. Behind her came a shriveled boy with blonde hair. He looked weak, but his weapon of choice couldn't have been more contrasting. A Heavy Sword.

The odd duo too eventually blended into the big crowd.

After a while, the large wooden entrance was shut closed. The reverberating sound marked the end of the participation in the entrance exam.

A large man with a sheathed golden long sword on his side scabbard walked into the room. The rhythmic metallic thuds that resounded in the now-quite hall gave a heavy feeling. He walked with his head high in the air. The scary scar on his left eye and a small smile on his face.

He strutted forward upon the podium with a stride that exuded an aura of grandiose.

He pivoted towards the crowd and unsheathed the long sword, placing it on the floor.

A loud boom ricocheted in the room. The room was silent for a second but suddenly went crazy. There were loud and enthusiastic cheers and praises. The crowd yelled to get a single glance from the lion of a man.

"As expected of the Vice Commander of 'The Guardians of Serenity'."

"Sir Lewin is so powerful. To be able to lift the infamous "Blazeguard."

"'The Guardians of Serenity' is truly glamorous."

"I heard a rumor that he was the best swordsman from the previous generation. He has only ever lost to the Grand Commander Vizle."

A commanding voice suddenly made the whole hall fall silent.

"I am the Vice Commander of The Guardians of Serenity.' I'll be your evaluator this year for the Knighthood Examination. It will be a test of your courage, wits, and lastly battle skills. So without wasting any further time.

This year the selection will be special. You all will be given ten days to travel to the Grimm Forest and procure the skin of a black tiger beast. I will be the one supervising and keeping an eye on all of you with the help of these."

He took out a Bronze Insignia with many intricate patterns engraved on it.

"The Insignias of the Holy Knighthood will be passed along to all the participants. The participants must keep them in their person at all times. Stealing and harming other participants is strictly forbidden. Not following the rules will result in immediate expulsion from the program and severe consequences.

Saying that he moved out of the hall exactly how he had entered.

The silent response was evident enough to show how surprised the applicants were.

"This is going to be-

The hooded mumbled softly with a wide grin and left the hall.

Soon, the students regained their calm.

They were individuals who had trained half of their lives for this opportunity and were denied to back down now.

Eventually, everyone rushed out of the hall in a hurry to be the,

Carriages and carts whizzed past people on the road. The hawkers and street shops yelled introducing their carpets, rugs, food, and several other commodities. The strong scent of spices wafted through the air signifying the sale of exotic spices.

A long procession of horse-drawn wooden carriages suddenly made the lively marketplace halt. The people gaped and looked at the carriages with eyes of respect and reverence. Though they did not know the people inside the carriages or those driving them. They could see the insignia of The Holy Knighthood.

A little boy dressed in luxurious attire tugged at his father's pants,

The boy looked awestruck by the glamour of the Knight procession.

"Do you remember the story about how bad guys who had once invaded our western province and the Kingdom's powerful warriors had fought them and made them retreat in fear? These people are those strong warriors."

The boy was stunned and imprinted the beautiful sight in his eyes and held his thin arms out,

"Yes. Insignia. I saw Uncle Rick and many other people at home wearing this too."

"Yes, they are also the strong warriors."

"Papa, are you also strong?"

"Yes, your father is much stronger than those strong warriors."

"Yay! Papa is the strongest."

"Papa but you said Mama protects us from heaven then is Mama stronger than you?"

"Papa! I am going to be stronger than you and Mama one day, and I'll protect both of you."

But though his lips smiled, his eyes hid great melancholy and grief deep within them.

He said more to himself than to his son.