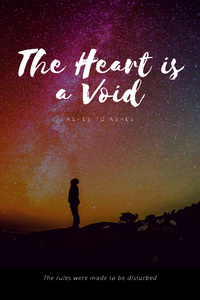 Sharak handed Crucis a dark-green, hardcover book. Its cover was thick and quite heavy, and the pages seemed slightly worn out. It creaked lightly as it opened.

The front page had no title or text, but scrawled in the lower right corner were the words, 'Carefree path of dreams.' They were written in a thick black ink.

On the top edge, there was an even smaller piece of writing, in blue ink and a much more organised cursive style, saying, 'I have launched my life to flow upon the river, but the river was a snake.'

"I think this is a story about crime, but I've only skimmed it and I didn't see the details," Sharak said. "The protagonist is named 'Charles,' I think. From what I can see, it takes place in a group of countries named 'India,' 'Vietnam,' etc."

Crucis flipped the book open at the centre, since in his experience it was often the most indicative part of the book. The early and late parts of a book were often spent in setting up the story or creating a dramatic ending, which meant that they didn't necessarily suggest much about the tenor of the book. While it was somewhat like jumping in the deep end, he hoped to adapt quickly.

In scanning the pages he saw that this book* read like a biography, albeit with a novelistic flourish.

At first, he was slightly thrown by the book's glut of characters, each of whom was covered at length. The most important seemed to be named Charles, but alongside him there were also the wistful stories of people named Teresa, Henk, Marie-Andrée, and Ajay. These supporting characters' names were from all across the world. But their cross-roads seemed to be the junction between despair and wild hope.

However, he had heard from Sharak that Charles was probably the focus. Searching through a few pages where he found this figure mentioned often, he found that the book was the story of a man named Charles Sobhraj, from Vietnam. Sobhraj was apparently a 'thief' and 'conman,' and Crucis saw a recent heist mentioned. Flipping a few pages back, Crucis sought out the account of this event, and found his way to its beginning.

He read with interest the story of Sobhraj taking a tourist for an elaborate meal in a vibrant location, then helping the drunk tourist back to his flat. Charles then robbed the tourist's belongings and escaped. The price for vibrant dreams of culture is often steep, and when faced with culture's hawkers it is typically more prudent to release the safety on a Browning. Crucis didn't find the name of the country where this episode occurred, but it seemed to be somewhere in Europe, implying that Sobhraj had made his way there from Asia.

He skipped forwards to a Chapter near the end of the book, and found recounted a story of Charles Sobhraj keeping foreign tourists drugged, in the guise of 'medication,' and taking their belongings. This was somewhere in Asia. After a long time of this, some were taken out and killed, and the book mentioned that Sobhraj had allegedly burned another group of foreigners to death. He seemed to jump between countries fairly often to avoid jail time, though mostly staying in Asia.

The story seemed strangely detailed, including specific lines of dialogue that were probably never recorded. Much of it was probably pieced together from testimony and speculation long after the fact.

As Sharak finished handing out books to the group, he saw that Crucis was reading quite rapidly through the book. As such, he walked over to ask about it. "You seem to be making progress. What kind of book is it? Is it some kind of 'thriller,' or mystery novel?"

"It seems to be some sort of biography," Crucis replied.

"Alright, but we'll discuss the technical matters later. So, how's this book? What's Charles like?" Sharak asked him.

"He's a Procrustes, from what I've read," Crucis replied. "He displays a new, exotic life to travellers, welcomes them in, and then robs or traps them. Later on, he seemingly kept victims in a state of perpetual sleep, and occasionally killed them. He often acts suspicious, but the victims' charming escapist hopes raise a smokescreen which they don't see through. Hope and change disarm. He is like a fantasy novelist, but the difference is that he is an artist."

"I see. An interesting man. So, you say it's a biography? I wasn't sure, it read like a novel."

"It seems to be a biography, but a lot of it is seemingly fabricated or reconstructed based on testimonies. A bit odd." Crucis turned to address the group. "Does anyone know about a criminal named Charles Sobhraj?"

"Yes, I've heard of him," DicingDevil said. "He was a killer from Vietnam, I think he was controversial for killing people and stealing their identities — and belongings."

"Stealing their identities? As in, pretending to be them? Why?" Sharak asked.

"As a disguise, since he was wanted. Also, a European was less likely to be arrested, to avoid trouble with foreign agencies."

"That makes sense," Crucis said. "So then he could talk his way out of trouble? Makes sense, he was very demanding — and some companions found that inspiring, seemingly. He could also pass for the kind of foreigner who would be a pain to arrest."

"Yeah. I mean, if they were arresting a foreign national and he was bullish," Starfighter said, "then they'd probably rather stall or let him go and remain in relative comfort, rather than risking the fate of becoming scapegoat in diplomatic affairs. At least, that's how he'd present the situation to them, to raise doubts. Still a few countries like that."

"Yes. But he was arrested surprisingly little, for someone with such a brazen public persona, who often courted risk like a daredevil. In fact, he was apparently called a 'serpent,' due to this slippery evasion of arrest. And when caught, it was still rarely as severe as it could have been. I'd guess it's because he was a showman of sorts, he vanished into the persona of a conduit to people's exotic hopes and dreams, though this was mostly deception. He exists only from their perspective, but in himself he is elusive. And if caught, he'll just turn to the captor and start haggling. Mostly, nobody knows him."

"It must have taken quite a while to catch him, and I saw that he had broken out of jail once as well," Sharak said.

Crucis skipped through to the end of the book, and found that there was a brief 'Addendum' added on. He skimmed it quickly. "Yes, seemingly the original book ends with him in prison, but hoping to escape. But there's an addendum about later events. He seemingly avoided extradition to the East, where he would be charged with more serious crimes and probably executed, by organising some drama in the prison to extend his sentence. Then he was eventually set free, and left in peace somewhat as a celebrity in Paris. But he then returned, for some reason, to a country named Nepal — 'some backwater next to India,' it says — where he was still subject to arrest, and was arrested again. A strange conclusion."

"Why would he do that?" Sharak said. "Couldn't he just live in peace, try to 'get away with murder' as they say?"

Crucis shrugged. "Who knows. Perhaps he enjoyed the showmanship, flying as if winged by the dreams of others — instead of resting, he wanted to go back and siphon more dreams to take a starring role in. Perhaps he was just a part of the environment of Asian tourism, the thrilling uncertainty of the so-called 'orient,' so he returned in much the same way as Mickey might return daily to Disneyland. Or perhaps he felt like one of those ambitious foreigners who comes to the West and finds success, but misses a sense of identity. Who knows."

"The show must go on," Starfighter said. "A strange decision from him, but I can respect it."

"Quite right. For some people, the law is sacrosanct — except for the unenforced or unenforceable parts, the selectively enforced parts, the parts which are just there because legislators are miserable sods — while for others it's just for thrillseeking, quite like a rough wave for a surfer or a crocodile for a crocodile hunter. Who's to say which is right?"

"Excellent," Sharak said. "So, would you say that it's worth the automaton training on this book?"

"Only on the parts about Sobhraj. The rest is too much of a distraction, all of these victims blurring into each other." Crucis flipped through the pages quickly, finding it easier to trace out what was going on in the novel's narrative. "The early part involves his childhood, I guess it's interesting. There's some long quotations from a guy named Felix, I guess you could skip that. Most of it is solid."

"Alright, great. I'll work on that tomorrow. You can keep reading the book, until I sort through and find another for you to check."

Sharak roamed across the rest of the room, to check on the group's progress.

A note from MOROSE

* This book's portrayal is based loosely on Serpentine, by Thompson.