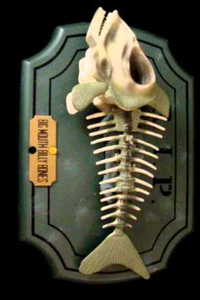 Reincarnated as the Fish Who Slays the Dragon

The sight of thousands of baby fish flooding the cave was a sight to behold. The previously empty cave water was quickly filling up with the small, translucent bodies. The sea of eggs rippled and shuddered sporadically as countless tadpole-like creatures erupted from beneath.

It was a majestic sight. However, Aiden wasn't able to marvel at it for long.

If Aiden could talk, this is what he would have said. He had just finished eating, so he was not in the mood to be tossed around by countless bodies.

The countless fish did not care what Aiden was thinking. As if he were getting tumbled in a dryer, his vision spun in every direction as the countless bodies collided with his own as the hullabaloo continued.

At first, it was annoying. Imagine violently spinning around without control; if it were an ordinary human, they would lose consciousness. However, it was mere spinning. Aiden wouldn't lose to it... is what he thought at first.

The fish onslaught didn't stop. After several minutes, the rate of fish hatching only increased. Aiden could hardly see any clear water around him.

*How many damn eggs did these fuckers lay??*

Annoyance turned to anger. It was the second time in a long while that the formerly strongest being in the world was struggling.

*No way, am I actually going to be trampled to death?*

After being beaten and tossed for minutes on end, the fish onslaught became life-threatening.

It was already the second time in this life where Aiden faced death.

His ego and pride wouldn't allow such a pathetic death!

Aiden focused on his movement as much as he could.

He felt how each individual fin moved his body along with his tail.

Push with the left, move to the right.

Push with the right, move to the left.

Push down, move up.

Push up, move down!

Slowly but surely, Aiden's control over his body improved significantly. He was no longer purely at the mercy of savagery. Though he had stabilized himself, he was still getting smacked endlessly by his siblings who were flailing about randomly.

*Shit, did the mother even think about where these eggs were laid? Doesn't she care about the survival of her offspring?*

He couldn't have been the only one that was getting smacked around like this. It was likely for some to have died already.

However, what Aiden didn't know was that this was the nature of fish and other weak, short-lived animals. The reproductive philosophy was to lay as many eggs or have as many kids as possible so at least some would survive. They weren't like humans where parents should care for their few children at infancy so they would grow up to be able to fend for themselves. The survival of most fish relied on random chance!

With some more effort, Aiden was slowly able to maneuver his way through the densely packed cave. As he focused on his movement and senses, he was able to perceive not only the movement of the water around him but certain "odors" as well. As a fish, his sense of smell seemed to have increased many-fold. Focusing on these feelings, he was eventually able to move around without touching another fish.

Finally, the rate of fish hatching slowed to a crawl, and everything was calm once more.

*Haaah... Looks like a lot of them are hungry too.*

Aiden breathed a sigh of relief when his perilous situation came to an end. When he observed his surroundings, he noticed he was much closer to the edge of the cave than when he started.

*Well that's convenient. I was planning to go that way anyway.*

After this experience, Aiden was fed up with the cave. It was time to leave. He watched a small group of fries hobble their way outside.

*I've heard that fish travel in schools... Is there a benefit to doing so?*

As he had this spontaneous thought, he decided to tag along with the group.

*Maybe because this group is so small, but I can't really tell. Maybe it's slightly easier to swim like this?*

If he focused intensely on the way the water was moving, he realized that there were spaces where the movement of the water allowed him to spend less energy propelling himself forward.

He thought he would be able to follow his brothers and sisters for a while, but that hope was quickly dashed.

As half of Aiden's group had exited the cave, a blur passed directly in front of him, and many of the baby fish disappeared.

Never in his life(s) had he been so unable to perceive something that happened in front of his eyes. However, just now, he was incapable of fully understanding what just happened. Despite this, warning bells were going off inside his head telling him that something dangerous had just occurred.

With panicked movements, he performed an about-face and dashed back into the cave as quickly as possible. As soon as he broke away from his school, he felt an intense ripple behind him. Not wanting to look back, Aiden propelled himself as fast as his tail could carry him. When he felt safe enough inside the cave, he turned around to figure out what had just transpired.

The school of fish had shrunk considerably. Panicked fries swam in all directions. Some of them were in pieces, and traces of red permeated through the water.

It was at this moment that Aiden finally understood what happened: there was a predator!

True fear struck his heart for the first time. He had almost died; if he hadn't retreated at that very moment, he might not even be alive to think right now!

*Can I kill the Dragon again? What a naïve thought! Shit, shit, shit, there's no way in hell I can even kill *that* thing! I don't even know what it is or where it came from, much less how to fight against it!*

It was the first time in his life that Aiden had felt so weak. Even at the age of 4 as a human, he hadn't felt this hopeless. However, he wasn't going to give up. In his past life, he had performed the impossible and killed something that was widely thought to be immortal. He wasn't going to lose to some stupid carnivorous fish!

Aiden observed the entrance of the cave from a safe vantage point, focusing intensely on every movement in the water.

The fries flailed around struggling to understand what just happened. Even from this distance, the blood's odor was surprisingly pungent. For a bit, nothing happened. But then...

From this distance, it was much easier to understand what was happening.

It was a skinny, dark purple fish with vicious eyes and sharp teeth. With incredible speed, it swooped through the group of fish before the fries had any chance to react. It easily caught several fries in its mouth as it passed by in a flash. The predator was much faster and stronger than Aiden was currently. Though it was larger as well, Aiden wasn't concerned about this fact. Size had never deterred him from fighting anything in his past life.

It was also impossible to know exactly how large everything was now since his frame of reference was so skewed. To him, the fries around him were just as large as he was and the eggs weren't much smaller. He wondered how large a human would appear to his current self.

*It's pointless to worry about size. How can I overcome that difference in strength and speed?*

As Aiden pondered his strategy, he concluded that it would be utterly impossible to fight with his current body. Though he had made up for lack of strength in his previous younger years with technique, that wasn't possible now. How could a fish use sword techniques? In addition, his body was simply *too* weak. There were points in Aiden's young life where he faced opponents that were so strong that no amount of technique could overcome it. He was in a similar situation now.

Aiden ruefully acknowledged his current weakness and judged that he had to stay within the cave and feed off the egg remnants for at least a little while.

The skinny predatory fish had made one more pass through the group of fries and didn't appear again. Though it was possible for no more predators to appear, Aiden wanted to play it safe and gather strength from eating whatever he could find in the cave. Once he determined he was strong enough, he would sneak out alone. A large group of fish was too conspicuous.

Aiden "gritted his teeth" as he buckled down to eat as much as he could hoping to gain strength.

Bio: Why did I decide to write? I am an isekai fanatic. I have read and/or watched a multitude of isekais, and some of them are bad. Like, really bad (see Conception and Master of Ragnarok)... I knew for a fact that I could write a better story than those. If those could get animes, why not try to write my own? I also wanted to create a world that the reader can explore. This concept is heavily inspired by Overlord, my favorite series of all time. Although the quality is nowhere near as good, I wanted to create an experience similar to that of reading Overlord for the first time and picking apart the world. I hope I am doing a decent job.

Join my community Discord server to discuss the novels!