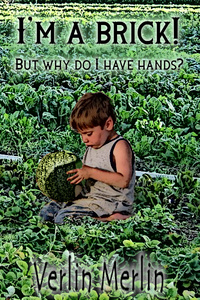 I'm a brick! But why am I a Humanoid? [A Non-Level LitRPG with a Humanoid MC full of Magic, Drama and Comedic Undertone]

Chapter 1- Where we learn of a brick.

Hi! I’m Vernoculius Armentosferon Alpestericule Almenispirin Lomenker…What, you think I’m kidding you? Well, you’re right, that’s not my name. In fact, I don’t have a name at all.

Why, you ask? The reason’s simple: I’m a brick! A spirit brick, yes, but still just one brick out of the billions that make up this palace. Which palace is this, you ask? Why, the greatest palace in the world, of course! Greater even than that hall of peace; after all, what matters more, spirit bricks bought from the suffering of trillions or everlasting peace? Spirit bricks!

Navigating back to the story now, I want to tell you something, something very very secret…I am the last of the originals, yes those famed original billion bricks built by slaves across generations to showcase the glory of the empire.

After those slaves revolted (with some help from yours truly!) the empire fell and all of the bricks were supposedly destroyed… of course they then rebuilt the palace and the empire…apparently the slaves were sponsored by the nobility, who were just interested in a change of regime not policy…long story short revolts happened again the palace was destroyed and rebuilt a total of nine times and in the end it became a haunted and deserted place while the Prime Ministration of Melodia now held court in that stupid hall of peace. There hadn’t been a single visitor for thirty decades now…until today.

Right there in front of me there were thirteen robed humanoids creating some sort of magical construct, a summoning circle perhaps? Well whatever it was, they weren’t doing it right and it should go wrong in about 3,2,1…

Huh nothing happened, maybe I was wrong…And suddenly I was in complete darkness…How did I get here?…Oh those fools! They were building their little circle right below my vantage point on the ceiling! And now I’m stuck here! What is this the bedroom?…Ugh yuck I can’t believe I got stuck in a…Aaaaaah! What is this! What is squishing me! And where is it taking me? AND WHY IS…Oh I’m out.

All around me I could see people hurrying about, casting a varied and blindingly bright range of magics. The lights were so jarring that I started crying loudly…Wait crying? I’m a brick, how can I cry? A..and why do…I…have…hands…

It has now been three days since I reincarnated into this body, things have been normal for the most part, at least the kind of normal it that was supposed to be there for newborns. Apparently I’d given this bod…my parents quite a shock when I fell unconscious, now they were checking up on me every few minutes and I had a permanent guardian around me at all times. As if to complicate things, my eyes were still too sensitive, I still didn’t know what my parents thought of me, for all I knew I was a sickly crybaby to them.Not only that but I kept going to sleep every few hours! Can you imagine? One second you’re planning how to escape your cage and the next you’re asleep…“Hbrreerrr” thinking of sleep almost made me fall asleep just now! Thinking! Oh how I miss my days with no sleep…and of course the old granny guardian of mine has decided to take my shaking my head as me asking for a lullaby

As you guys probably guessed, I fell asleep, again, apparently babies here sleep for over 21 hours, not the usual 14 or is it unusual? Well either way it’s completely normal to fall asleep every few minutes. And how do I know this? I know this because a glowing screen told me so

“Status” I say causing the screen to appear

And apparently focusing on a particular part of the window brings up information about it.

And the click gave me access to pages on pages of information on the Banmeru…about 2000 words I’d say. But it did give me some good information

1) I’m the heir to a Earl, that puts me at about the middle of the noble hierarchy but that only holds true if the Kingdom has a stable government, The palace had once been ruled by an Earl family that had ruled from behind the scenes, in the end the incessant incest and conflicts between the real ruling family and the earls caused their fall

2)I already have a title, so titles are hereditary, so it probably isn’t a doomed system like that ministration

3)There is no mention of magic, so maybe it’s banned? But I definitely have magic so…Am I doomed?

I’m having my first bath, well at least the first one where I was awake. It was not a good experience, or one I particularly want repeated, maybe there’s a magical way to stop people from touching you when you were a baby…

Apparently water makes one drowsy, huh guess I’ll just have to wait three months for this sleep cycle to end…

Well it’s time to meet the parents!…Or wait for them since the granny nanny doesn’t seem likely to move anytime soon.

For the next several hours I played with several of my toys (I’m still a kid! don’t judge) as I waited for my parents to come in and for me to have a conversation with them.

“Papa…” but quickly found my mouth muffled and me being carried at inhuman speeds to…somewhere…What? This baby doesn’t have a map of the house okay!

Held in a profoundly awkward position, I was hurried through the halls at roughly 300 miles per hour, it also told me without a doubt that magic was very much used in the family because magic was the only reason these speeds hadn’t killed me, for some reason though I couldn’t figure out how this magic was working, or if it even existed.

“Josephine! Alexandra! Everyone get to the Rosenda Hall, the baby is speaking!” father screamed as we approached what seemed to be a wider set of hallways filled with paintings and artifacts, clearly a hall of some sort. Also to be noted is the fact that they were all enchanted in some way for even my baby eyes could see them at 300 miles per hour.

Eventually, after passing through hallway after hallway (Seriously, how big is this place?) and my father calling people out every few minutes we reached a giant ballroom that was large even by the palace’s standards…maybe this was the greatest hall in this world? Yes that was definitely it! How could this world have anything greater than my great hall? It must be inferior!

By the time I finished my line of thought I noticed that my entire family(or at leastwhat I presume was my family) was staring at me.

“Grandma…why is the baby not speaking yet?” a voice, it’s source hidden among the ground asked.

This caused my father to squirm and look at me pleadingly.

Hesitantly I complied and said, “Hi…”

Support "I'm a brick! But why am I a Humanoid? [A Non-Level LitRPG with a Humanoid MC full of Magic, Drama and Comedic Undertone]"

Bio: I am a cat of magic that roams the many worlds for fun.

Today I am a grey cat that has chosen to cross this Royal Road.

Great hook for attracting readers for sure. Can't wait to see where this story goes.

Oh heck yeah! A brick with an ego the size of an imperial palace xD

Bane the Wolf God 8 months ago

Ahhh... This is strangely, crazy. But in a good way! It reminds me a little of Hitchhikers... Interesting!

putting my seatbelt on for the ride

putting my seatbelt on for the ride

Hope you enjoy it!

Thanks! Hope you enjoy it!

The brick has hands...

It is thus a humanoid...

I think I need to add that to the title. Welp! Biggeest Title on RR here I come!

If someone compliments him by saying 'You're a brick' he's going to get really paranoid.