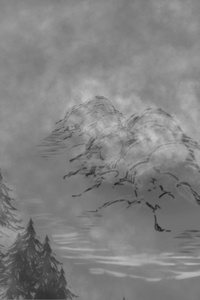 I indeed don't know how to cultivate

Old Xiao, who took to his heels quickly, was about to move away when he suddenly found that the surrounding space was limited.

The cold sweat suddenly rained, and old man Xiao turned his head trembling and looked at the gate.

To be precise, it was to look at the threshold besides the gate.

Cerberus laid lazily on the threshold, but his voice was very unfriendly.

"What do you mean, you fellow, by throwing a girl at this great man?"

Old Xiao opened his mouth, but he couldn't make a sound.

At this point, the Equinox Flower in his arms seemed bright, and an invisible fluctuation overflowed.

Cerberus sensed this fluctuation and somehow let go of the restrictions on Older Man Xiao.

"Since he has this painting on him... it seems that Lord should acquiesce in his practice."

Old Xiao didn't know that his paintings made him escape the test.

Older Man Xiao bowed his head and even bent his back unconsciously.

With the brain turned crazily, at this time, Xiao older man like a truant caught child, full of good reasons.

"The Lord in the room is born with a sense of loneliness."

"I put my undeserving disciple under the hands of the Lord, not only can pay tribute to his heroic attitude but also hope to serve Lord's life.

Under the gaze of the older man Xiao, the little yellow dog thought for a while and finally waved his paws.

Just as old man Xiao looked at Cerberus's back and thought he had escaped out of trouble, a sound sent his head a shock.

"Oh, you have the smell of the flowers of hell-the Equinox Flower."

"Now you are just some dead cat bounce."

Hearing the old voice, Xiao stayed where he was.

Looking at the brightly lit yard, Cerberus pulled the door with his hind legs, and Xiao was terrified inside.

In the house, Wang Yan heard water coming from the kitchen and quickly followed in it.

Looking at Zhang Jian's side face, Wang Yan couldn't help but be fascinated.

After all, Wang Yan had never been in contact with the opposite sex after years of indulging in cultivation.

Nowadays, it was naturally the first time that Wang Yan, who was the mainstay of the Purple Sect spiritual generation, had come to someone else home and worked as a maid for others.

Naturally, she stepped forward and picked up the plate in the water.

After all, as a cultivator, Wang Yan suddenly recognized her present situation.

Now that she had promised to be a maid, there was no need to be melodramatic.

"The bed is in the next room. You should sleep first."

Wang Yan unexpectedly shook her head and said a little angrily: "Senior, now I am a maid, these should be done by me."

Then she pushed Zhang Jian out of the kitchen with her hands.

Now it was Zhang Jian, who had no idea how to speak.

"I am afraid that this blessing can't be taken by myself."

After sober, Wang Yan hummed a song, brushed the dishes, and thought about what had just happened.

With that in mind, she thought that staying was the correct choice.

Staying here for a few days, and maybe she would break through to the next level.

While Zhang Jian heard Wang Yan singing an unknown minor, he sighed in his heart:

Indeed, one more person in the family made more vitality.

The night infected the curtain.

With the cries of unknown animals in the mountains, Zhang Jian slept late.

He was considering the various expenses the next few days. Although Wang Yan's clan had a lot of money, he wouldn't say to them.

It meant that Zhang Jian would be distressed by the expenses of two next.

Because of the things sent by Old Man Xiao before, Zhang Jian kept them one by one.

"It seems that I have to go up the mountain again."

In the bedroom, Wang Yan was practicing.

Since she could remember, every night had been a tedious practice, but today was different.

She had no idea why she didn't feel any discomfort in this strange bed and even felt that the qi around her was very active.

The cultivators were accompanied by qi all their life, and their induction to qi was quite keen.

"Why ... why is the qi so lively in such a barren mountain range?"

As well known, the Purple Sect was recognized as the first noble and decent sect in the whole world because there were two Geomantic Ranges under the Purple Mountain.

The qi spitted out by these two Geomantic Ranges had subtly changed all the living creatures on the Purple Mountain.

The intensity of qi directly affected the resources of cultivation cultivators needed in this place.

Now, sitting cross-legged on the refreshing and clean bed, Wang Yan felt that the qi in this room seemed to be stronger than the cave of Purple Sect.

With the qi encircled, Wang Yan felt a sense of security.

Felling the signs of Zhang Jian in the room, looking at the orderly layout of the room, and recalling that although she was a cultivator as her room was a mess, Wang Yan couldn't help but have some fantasies, which made Wang Yan had an accident, without a doubt.

With the qi more intense than Purple Mountain, Wang Yan introduced it into her body, for she didn't firmly restrain qi in time, which directly led to it rushing around in Wang Yan's body.

By the time Wang Yan reacted, her meridians were almost unable to bear the surge of this qi.

The voice was not gentle, which startled Zhang Jian, preparing to go to the toilet.

Between the center of the main hall and the toilet was his room. Zhang Jian, who walked to the door, was frightened by this sound.

Which doubt just flashed out in his heart; his hands had already opened the door.

What came into view was Wang Yan, who was disheveled and sweaty, pinching her right leg painfully.

Zhang Jian saw it silently said a sentence in his heart:

"Excuse me for offending you."

Wang Yan didn't notice the entry of Zhang Jian, for all her energy put on this qi at this time.

Now she had been unable to control her own body.

Wang Yan could only perceive that her body was still absorbing foreign qi continuously.

Although her belly of qi expanded under the action of that qi, her realm had broken through to a higher level; her belly cannot continue to bear it.

There was no way when qi rushed in her right leg; Wang Yan barely grabbed control over her body and confined qi to her right leg.

At this point, a pair of warm hands were put on her calve.

Wang Yan barely opened her eyes and found Zhang Jian in front of herself, holding her right leg in his hands.