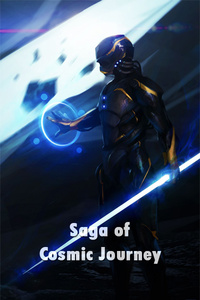 A successful 21st-century billionaire that fell in the hands of the corrupt government. Once a prominent figure who ruled with money and owned a company operating in all sectors across Earth.

What will Rex do when he gets the memory of such a figure?

With gigantic cosmic beasts roaming the galaxy whole, Rex has no choice but to use all of him to survive and escape to the space crack where the creature came from.

Rex, now stranded in an unknown solar system, is forced to descend to a nearby planet. To a planet that is home to a prosperous human civilization with deep secrets and the inhabitants mastering catalyst magic to boot.

In this puzzling world of swords and magic, accompanied by a genius scientist, Liz, and several comrades he will find across his journey, will Rex survive and rise to prominence, or will he fail and suffer the same fate as his predecessor?

Rex is sure of one thing: He will stand against all odds and prevail! Maybe even use his advanced tech to uplift the native as well?

What would happen if magic and sci-fi merge together? Read this if you want to find out.

This is a Science Fiction Fantasy story set in a Middle Ages setting with ranging technology levels.

There are, of course, magic and monsters with MC having large technological advantage over them.

If you notice any grammar mistakes, please point them out. (I have enabled suggestion helper)

A new chapter will be released thrice a week.

The cover isn't really mine, if you're the artist just tell me.

Grammar and such is good. The characters are fine. The plot is OK, although the start is overly complicated. How many steps did the protagonists really need to go through to get to the planet in Chapter 5? Overall I'm going to give it a week or two and see how it goes.

Which is fine when they are used right and all, but I think the author missed the point on this one. Accents and slang are nice when used in the right balance, and the author does make sure that the parts are easily understandable, yet there doesn't seem a point to it. Just feels put in to have it there. Even if its used for separation of the different characters through speech alone, there are other ways to do it.