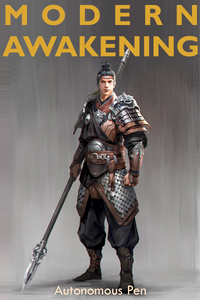 The Characters are xtremely difficult to relate to

So far Ive liked no one in this story. MC has a semi tragic backstory, but he's a generic battle maniac cultivator and is willing to kill himself (since tutorial gave him extra lives) just because his opponent, A generic orc created by tutorial was already wounded and the MC wanted a fair fight. The modern human character we are introduced to is a full on delusional psychopath who thinks he can use the MC in his twisted power fantasy, even willing to go so far as to shoot him for no reason. MC father might have been likable but he's just a few sentences in the story and he's portrayed as a man who ruined his clan for his sons sake.

The basic premise of story sounds interesting but without anybody likable to relate to, I've lost interest.

The story proceeded at a fast pace for the first couple chapters, followed by a glacial tutorial section (which the author indicated would be 80-100 chapters in length). Even at a chapter per day, that is months where the stakes are intentionally blunted while the MC slowly gets slightly larger numbers, most of which don't matter because his cultivation powers and skills allow him to punch above his level right from the start anyway.

Characterization-wise, the main character's personality is a bit flat. He is a cultivation genius... and that's about it. To compensate, the author puts him near someone who apparently experienced a psychotic break and believes that the best idea in the world is to antagonize an extremely skilled warrior who possesses magical powers. Every time we are treated to the pseudo-antagonist's viewpoint, who thinks that he is helping the main character by doing things like shooting crossbow bolts at him, it makes me cringe. I guess the fear was that if he didn't have an idiot yelling at him, he'd just fight the tutorial monsters and win quickly instead of forcing drama and dragging things out.

Slight Issues, but only slight

There are slight issues to deal with in this story, but for the most part those issues are easily overlooked.

The writing here is good. Paragraphs are well spaced out, dialogue doesn't seem stilted, and there's a good balance of things. Blue boxes have been used for infodumping, which leads to large parts of a chapter being taken up by one big, blue textbox. That said, having the blue boxes provide infodumps makes a whole lot more sense than the MC randomly spouting exposition for funsies.

There are a few grammar issues and typos here and there, but they're very ignorable. You might spot a use of 'easy' rather than 'ease' or something like that, but it happens sporadically enough that moving on is very easy.

Not all that much has really happened in the story as of yet, but it's a good start. Cultivator gets yeeted into mystical cryogenics, wakes up a few milennia later when blue boxes invade. Not exactly breaking new ground with cultivation and systems, but I haven't seen the two put together exactly like this before, so it's fresh enough to be interesting, and I'm willing to see how it plays out

Mark is... kind of annoying. At this point it can go one of two ways: Mark stays annoying and hopefully dies painfully, or something happens to make his annoying nonsense less annoying nonsense and more fun back and forth. If Mark and the MC share some kind of bonding experience and become best buds, I could see Mark not being someone whose appearance I dread, but if the interactions between Mark and everyone else remain the same I think he'll just be irritating to read about.

Overall this is certainly promising and worth a read so far, though there is definitely potential for the entire thing to fade away to nothing (but lets hope not).

I'm reviewing this very early, mainly because I like his other work but it was getting bogged down in social aspects of the story, which this aims to not do. As for the writing, it is done well so far, grammatically and flow, and has an intriguing premise. In excited to read more!

I don’t give five stars too lightly, but this book is fun
to me, that’s what matters most when all is said and done
it’s mostly a mashup of cultivation and tower
but what sells the combination is comedic power!

The lead character has depth, his backstory is cool
he’s learned lessons in his life that one can’t learn in school
he’s mature but still learning, he’s proud but shows respect
he’s the point where the two genres mostly intersect

Other side characters have an interesting job too
‘mobs’ are not just there to be killed, they have points of view
you’ll enjoy the orcs and other human characters
but I think the lead appeals the most to most readers

The story is just getting started and will take a while
right now they’re in a tutorial, a training trial
basically the world is one of many in a war
facing some great unknown threat, but we’ve yet to learn more

The style is light and uses status boxes very well
could the exposition be tightened up? Ya, it could
there are serious and funny moments balance out
the movie jokes though are something which I could do without

Reviewed at: 11. The Curtain Falls

Cultivator meets system. Grammar and plot good. There is one character that isn't the greatest, but he seems necessar for a later development. At chapter 11, I might wait a month or two to read more chapters at once. Worth the read. Not much else to say. Wow, 50 words seems so long right now.

I've only seen the start but i like it. The writing and grammar are pretty good, no obvious peoblems there. I think the story is pretty solid up until now, and I honestly love the way the cultivation world is defined, it comes over as a proper world, not some shitty wuxia novel. Cant say to much about the characters but the mc is good for the start.

Reviewed at: 16. Breezing Through

This was a very fun read for me.

In short, this is a mix of LitRPG with Cultivation with a Tutorial stage and an adventure setting. I expect before long the cultivation idiot to become an adventurous cultivation idiot... Or wallow in self pity and regret upon finding the truth of his circumstances. Both seem interesting to follow and see how each develops if I'm being honest.

Grammar was fine, though with minor mistakes every once in a while that will easily go unnoticed if you're immersed in reading.

Style was what you would expect from a published book with a price tag on it. For what it's worth it has the makings of a really good book.

The cultivation systems, the story and the progress was easy to understand and fun to read. The fights were very well written and I can't wait for more. In general reading through this was a joy, but it did have some points where it could improve.

Namely, the "antagonist" or what seems for now a side-character has gotten the rough treatment. For an unhinged personality like his, I believe that more than a few paragraphs explaining his past are needed. Right now he seems like a badly written character that would never exist in real life. That might take time to fix, and it is the reason I didn't detract from my Overall score for this.

All said and done, I wholeheartedly recommend this story to those who want to read of a warrior who's lost in a world far too detached from him. If anything, I should be giving bonus points for how well the story executed the premise we were promised in the description.

I like how the story is starting. Just enough backstory to get interested in the mc, without going into 300 chapters of his everyday hum-drum life. Also the system seems to be less numbers, wich is a plus in my book. Hope he can buy cultivation resources from it later though.