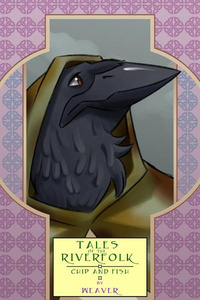 Tales of The Riverfolk Company

Remove Ads
Previous Chapter
Next Chapter
A note from Weavervale

Thank you for reading Volume One, and the more I wrote it, the more I fleshed out bits of my world and now. I'm happy to say that because of the amount of demand, I've started Volume two, and here is the first chapter. I'm going to be sticking to longer chapters and posting once a week, and I expect this to be about 22 chapters.

One by one the otters plodded into the large chamber until it was almost full. The mass of about two hundred otters, all were eager to get this over with. Over the last twelve weeks, each had gone through battle training or security training to fit their desired station. All to get ranked and compared to their peers.

Chip filed in near the front of the line. Today he would get his official assignment if he wanted it, but he was already thinking of doing something else.

The Admiral, the head of the Riverfolk Community Trust and Mercenary Company, greeted each otter as they came in. To his left, in the center was a pile of pins of various jobs the otters could take.

"I choose mercenary! Queens own!" An otter said, brandishing a golden pin with a sword on it.

The most coveted pins were the silver merchant pins, giving the bearer a charter to sell goods outside and inside the company, and those were reserved for the top ten percent of otters. The rest were gold mercenary pins of various types to include ship duty, soldiering, policing.

The final and smallest group of pins were the green leaflike pins dedicated to those who would leave the company to become rangers, companions to the druids. The druids that kept the beasts at bay for the good of all woodland creatures. There were no pins for druids. Any otters showing aptitude to become a druid would have already been selected.

Casting about, Chip looked for his raft mate, Sam. She had done exceptionally well on her placement on the otters of merit list. The OML would be read one at a time and each otter would make their selection, proudly announcing that they pledged their service to the company for ten years to do whatever they had chosen.

"I choose merchant! Ship duty!" Another otter said from the middle. She held up a pin with a clam on it.

Very rarely, at least so far as Chip was able to discern, had a merchant spot not gone to the best otters. It meant that some poor fools had done well, but decided that they wanted the mercenary life over the merchant life.

As the Admiral went down the first ten names, Chip heard a familiar one.

Just months ago, Chip had initiated Sam into his polyamorous group-his raft- and every time he saw her, his heart gave a quiet thrill. He sensed her in the room, as another friend, this one a druid had bonded the three of them in the raft together, using the great bond customarily made between a druid and a ranger. It also meant that he always knew where his future husband and wife to be were, as well as their druid, River.

The young otter walked into the center to grab her pin. Chip felt anxiety and resolve through the bond as she grabbed something. He gasped, realizing what she had done.

A collective gasp came up from the crowd. Sam had the choice for any posting and she'd gone to become a real fighter.

Gulping, Chip sent warmth over the bond. Sam, knowing he was there, sent him a knowing wink.

They had spoken about this and it seemed like their new polygamous group-their "raft" of three- all wanted to stick together.

"Well, that was unexpected. We wish you well, Ranger Sam," the Admirals' look of shock still hadn't faded off his face.

Sam pinned the leaf to her tunic, moving back into the assembled crowd.

Chip walked up, each step feeling heavier. A long time ago he was resigned into just being a mercenary and doing his mandatory conscription time for the good of the riverfolk. River and his raft had shown him a different way.

Stepping up, he made a show of looking at the remaining pins and assignments attached to them. There was one coveted spot at the armory, one as a merchant at the bazaar, and one as the aide to the Admiral. He pushed those thoughts aside as he selected a pin.

His back erupted into a sweat as the room once again gasped. Two of the most promising otters of their generation had thrown caution to the wind and picked an alternative path.

"Well then," the Admiral said as the applause died down, "Our next best Chef, Chuck!"

A beaver came up and sneered at Chip even as Chip was intercepted by Sam.

A smile broke out over Chip's face because at least he knew that Chuck would represent the company well. He patted Chuck on the back as he walked down and the Admiral announced the next in line.

"I didn't do this for you, but you had better do my uncle and me proud," Chip said.

They clasped paws and then released each other.

Twenty minutes later the last otter was given the final duty of being a ship-borne mercenary.

The Admiral gave them some parting words and then a group of ten senior otters came to speak with groups that aligned to their chains of command.

The black otter standing outside welcomed Chip and Sam and one pair of beaver twins that had chosen to become rangers. On his breast, the black otter had a green leaf pin with a silver outline. Theirs had a black outline. He stood stiff and tall, inspecting the four of them as if they were for sale.

"This is what the company sends us, does it?" His gruff voice made it sound like he spent his life eating rocks.

The four of them stood in a formation, as the black otter surveyed them.

"I suppose you think that ranger training will be easy, or that you chose the easy option instead of boring mercenary work. I am here to tell you that this is a mistake. This is the hardest, most difficult thing an otter can do. Many become rangers thinking that they can do ten years and leave. That this is a short time thing you can retire from," he stomped his boot.

"Being a ranger is for life, and if this is a problem you can turn back now."

The otter looked at the four of them.

"Apologies, but what is your name...sir?" One of the beavers said.

The black otter gave him a glare that would have made Chip melt. The beaver was nonplussed.

"I am Ortho, but you can call me Swordmaster. Now, do we have any drops? Nobody? Good. I assume you have all packed already? No? We are heading to your home first, beaver twins. You will have twenty minutes to pack all that you want to carry to the valley of red mist. We leave before dark."

Support "Tales of The Riverfolk Company"

Bio: I write gewd things and I hope you enjoy tham. But seriously part of my goal is to write something that you could read to your children(for the most part) or something your spouse and kids could enjoy.