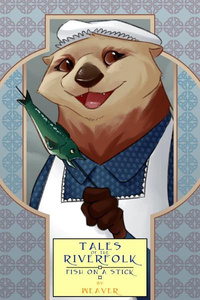 Tales of The Riverfolk Company

Remove Ads
Previous Chapter
Next Chapter
A note from Weavervale

I'm not calling out any of the other fast foodies today because I'd rather ask you to rate or review this! I'm getting into the fun and games part of the novella and enjoying the heck out of it.

“When you become a druid,” River said, “they make the apprentices and initiates wear these headbands to distinguish who is what. Grey is for the initiates, the new ones, and apprentices like me wear white to show that we’re out working for the community, but not yet done with our formal training.”

Chip nodded his head as a tall otter walked up behind him.

“Ah!” Chip said, turning with one otter pop stick in his hand, waving it at the intruder.

“Probably not the best idea to surprise Chip,” Uncle Brit said, staring at the mercenary, “It doesn’t matter how handsome one is. Chip will skewer you faster than you can say ‘beaver’’s are doing everything wrong’”

River, Chip and the guard all turned their heads sideways at this assertion.

“Sela, it’s a pleasure. I hope that your fish is as good tasting as you are,” Sela said.

River whistled at that.

“Well, Sela, I’m River. Chip and I were just talking about what he needs to do to win this food contest that’s coming up,” The raven said, eyeing the large otter.

Sela reached out a hand to accept a fish on a stick from Uncle Brit.

“This one is on the house,” he said, “But tell me if you like the spice palette. I sent Chip here to get the best spices around and he came back with this mild spice.”

Sela nodded back to the elder otter.

The group waited as Sela crunched through the head of the fish.

Smiling, he slapped Chip on the back, “This is good. I think if you two make this for the contest you’re sure to win.”

“Sure you say that,” Chip said,”But in reality we’ve got a bunch of judges. And I don’t know their taste palettes, so that is probably the first thing we need to do. River, are you taking notes?”

The raven grabbed a notepad from somewhere and was slowly scratching out something long hand.

“I gotta know what is in this deal I’m making if we really want to make a deal,” she replied, “And I think that this is going to be good for the betting markets as well. I’m going to have to find out what the odds are.”

River winked at Sela and Chip.

“You’re something else,”Sela said,”I want to hug you.”

“You want to wha-” River said as she got bearhugged by the tall otter.

Rivers' eyes went wide as she locked them to Chips, as if to say, ‘Take care of this and anything you want is yours.’

One awkward pause later, Chip put a hand on Sela.

“Uh, would you mind releasing my co-conspirator?” he said.

Support "Tales of The Riverfolk Company"

Bio: I write gewd things and I hope you enjoy tham. But seriously part of my goal is to write something that you could read to your children(for the most part) or something your spouse and kids could enjoy.

alexander the grape is the best otterpop flavor =)