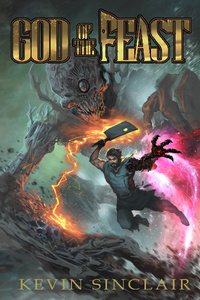 I woke up on the sofa in my apartment. Judging by the amount of light pouring through my useless curtains, I guessed the morning was well advanced.

Swinging my legs around to the floor, head pounding, I rubbed at it. To find a massive, tender lump on the back.

The night came flooding back to me. I unsteadily scrabbled up to my feet, swaying slightly from the effects of both a raging hangover and concussion. Looking around the living room frantically, only served to worsen my symptoms.

If there was anyone else in here with me, I wouldn't be fighting them immediately as I began a dramatic and vocal emptying of my guts.

Stinking vomit projected from my mouth… and… my nose. It felt like my stomach itself was trying to leave, too. When I'd finally emptied everything available, my eyes streamed, and my nose felt like I'd inhaled stinging nettles.

Staggering to the bathroom, keeping a bleary eye out for intruders, the apartment seemed to be empty to my addled senses.

I splashed water over my face, rinsing my mouth out as I went. Before plonking my ass on the toilet, exhausted.

My mind vainly searched for answers. I guessed I must have had my drink spiked. It had happened before, though I just fell asleep in the bar that time. I sure as shit didn't hallucinate about portals and demons.

"Are you quite finished with this pathetic display, human?" Said the goddamn ninja from my bathroom doorway.

"Well fuck. Not a hallucination," I groaned.

Normally, I wouldn't have groaned. I would have tried to deliver a firm ass whooping. But, in my current state, I had nothing to offer.

"I have tarried here long enough. Show me to the recipe book.”

"Are you really going to try to eat me if I don't play ball?"

"Well, I'm glad to hear that mate, because honestly, cannibalism is kinda fucked up. Especially when I could cook you a banging meal,” I said feeling some relief.

"I will not try to eat you, I will eat you, " he said pulling his face covering to one side. A horrifically wide mouth, full of sharp yellow teeth, was revealed. His nose was wide and flat to his face, with two slits for nostrils and the eyes, oh god the eyes. Slitted with a red iris and a yellow pupil. I panicked. Instinct kicked in and I hurled the nearest thing I had to hand at him as hard as I could.

The roll of toilet paper bounced harmlessly off his chest. Shit.

He eyed me dangerously. "I suggest, that is your last attempt at defiance."

"Yeah. Well, I’m totally knackered at the minute otherwise I’d kick your ass,” I sighed feeling an increased wave of nausea and dizziness.

“You are nowhere near capable of such a thing human.”

“What even are you? Apart from one horrifying looking dude." I replied.

"Where is the book? My master expects my prompt return. You do not want to keep him waiting."

"Yep, got it. Or you’ll eat me. Sure, sure. Can I at least get changed first? Then I'll take you to his old restaurant. If it's anywhere, I'm sure it'll be there."

“I’m covered in piss and vomit. I’m gonna draw the attention of everyone we pass.” I gestured to the state I was in. I was mainly trying to stall, though. I mean, mooching about with a little ninja would probably draw more attention than my disgusting state.

"I will," I replied earnestly, holding my hands up in supplication as I rose from my throne.

He let me pass then followed me to my bedroom.

"Hey man, a bit of privacy?" I said, trying to close the door on him.

"Leave the door open. I will wait out here."

I did as he said, and as soon as I was out of sight, I patted my pocket for my phone. It wasn’t there.

"Shit," I hissed, realizing I must have lost it last night, or it had been taken.

The demonic ninja popped his head in. "Did you say something?"

"Unless your name is, Shit, then no. Now fuck off and give me a minute. It's perverted enough that you want to eat me."

He didn't reply, just melted back out of the room silently.

I hurriedly tried to think of another option, when the glowing amber light of the PS4 caught my attention. It was still on. In rest mode, I'd set Starfield. Off downloading before I left. Finally, some luck!

While stripping off my soiled fetid clothing, I used my foot, to operate the controller. Without any use of hands, I managed to navigate to messages, and select, Mal. He was my closest friend and was the most likely to help me out. Demon ninja popped his head in again. “Hurry,” he said angrily before moving back out. Taking that as my queue for having at least a couple of seconds before he came back in. I grabbed the controller and started typing the message.

It was a shit message, and I hoped he both got it in time and understood it. The time on the screen said half ten, so hopefully he’d be up and could act on it. He lived near the seafront where the restaurant was, so there was a chance. I finished getting ready, but my captor was back in shouting again.
“Go now. You’re taking too long.”

“I need socks, man. And shoes,” I said, settling my hoody down.

“Only shoes, no time for socks.” I grabbed a ball of socks anyway, but suspected if I put them on, I’d be leaving without my trainers. I still received an impatient prod in the ribs from his well-used baton as I tied the laces. I felt better already being in comfortable clothes and footwear. Dress clothes and shoes didn’t lend themselves to fighting overly much.

I stood up from the bed. The room spun and I staggered, but stayed upright. “Alright then. Let’s go. I suppose.”

He prodded me again as I passed him. I wasn’t sure what he was hoping to achieve, except to further piss me off.

The beach was as you might guess, a twenty-minute walk away. Though I intended to use the car, I could drive around for a bit and potentially come up with a plan to kill him. Maybe the old high speed crash, while I’m wearing my seatbelt and he’s not, trick.

“Which direction?” He asked bringing my machinations to a halt, halfway across the living room.

“I don’t bloody know. What do you think I am a compass?”

“Give me a general direction.”

I knew I could just about see the sea from my front window, so I pointed. “That way.”

How the fuck should I know? It’s on the coast.” I did know. It was around a mile and a half away.

His response was to inexplicably pull a thick metal ring out of his tight fitting robes. It was at least twice the size of a dinner plate. Closer to a bicycle tire. I was confused by its sudden appearance. There was absolutely no way he could have been carrying this around with him the whole time. I would have noticed.

He held it up in front of us, in the direction I’d indicated and started doing making creepy little humming noises. A bright blue light appeared in the air a few feet in front of the ring, the same color as the portal I’d seen the previous night. Through it I could see the sea. My heart sank. This was going to be a short trip indeed. He motioned me through, watching me carefully.

"Is that what you use to go to your world too?” I asked, staring at it reluctantly. “It’s pretty neat.”

“Through,” he commanded, impatiently. I moved slowly and fake fell over intending to land on the floor, as an extra stalling tactic. The fast little bastard was there in an instant, catching my arm mid fall with a ridiculously strong grip, then he launched me through the portal.

Thankfully, the other side came out over the sand, so the unceremonious touch down didn’t hurt too much. It was hard to feel too joyous at that stroke of luck as I didn't feel being thrown through a portal was a win at this point. As I lay there, I also considered that I’d massively underestimated my opponent. He was ridiculously fast and strong.

“Do you recognise this location?” Grashuyk asked, as he landed lightly beside me.

“And the restaurant we are looking for?”

“Down there,” I said, pointing. “Are you going to use your ring thingy again?”

“We shall walk. I require the remaining charge for the return trip to Gulithea.”

I got up and dusted myself off. “Well, Hakan’s old place isn’t far. Been empty since he died, but I just got a loan to reopen it,” I told him conversationally.