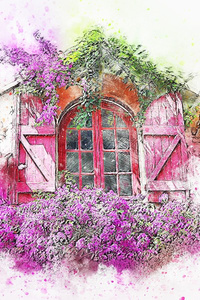 Fear the flower, for behind its beauty lies unfathomable danger.

The Flower dungeon tells the tantalizingly tasty tale of a developing dungeon in a world where dungeons are shuttled from planet to planet by the will of the universe itself. Explore stars, aliens, magic, and gardening while watching a struggling Aetherus try his best at building his own eldritch paradise after the Earth decided it was best not to exist anymore.

Beware! Gardens, crepes, and a few too many marble statues await

My Opinion on This Story

In my opinion, this story has some pretty good potential, and the only reason it doesn't get 5 stars is because of how new it is. Now, I will come back and edit this and probably change it to 5 stars if it gets a few more chapters and has a somewhat regular upload speed. Anyways, the story seems good so far and can, no, will get better down the line. Also, the interlude's remind me of documents from SCP...not sure if this is intentional or not.

Edit: Because this is being released at regular intervals, you now get your first 5 star review! And hopefully I shall not be the last to give you this, for this story is damn good and it'd be a shame to see it not get the praise that it deserves. Well, have a wonderful rest of your day Sleepy and happy hunting to our resident Mad Gardner and their marble Minotaur!

(I'm now pretty sure that the interludes are based off of SCP documents, or that they're at least inspired by them)

Reviewed at: Chapter 8.5 - The results of Parental Neglect, Alongside One Happy Happy Bull

I started this story with expectations of reading a subpar dungeon story, but came out with quite an interesting mixture of several different popular genres on this website (system apocalypse, eldrich, dungeon, etc.).

I have been enjoying both the characters and the plot, and really have absolutely no gripes whatsoever.

However, in order to provide some level of constructive feedback, I would say that perhaps the intermissions come too often.  Although they are interesting and tell us more about the world and our protagonist, they do also slow the pace of the story down in a way that could become tedious if they continue coming at the same rate.

Reviewed at: Chapter 8.5 - The results of Parental Neglect, Alongside One Happy Happy Bull

I love it .. highly recommended .. the only bad thing that still has very few chapters xD

I can't judge this novel I get hooked ...

I love her as much as I can and I am afraid that the car will hurt me and I will not finish it.

Natural Madness Within The Story

Reviewed at: Chapter 7.5 - A soundless Scream

Style score - Some people don't like the constant interludes of author but I really think that those chapters are important for us, the readers, to know more of the character (in another words, character building). Though with how many reports/interlude are related to our mc early on the story, this may unveil the mystery feel faster.

Story score - Not much to say on this one but many can tell that the story will take us on a wonderful ride.

Grammar score - There is nothing in the book so far that breaks immersion.

Character score - The mc, a former human turned into a monster, experienced the apocalypse. However, those "Experience" he thought he had was not exactly right. I mentioned this because I like how mad and natural it was. There's no details on the events of his exact transition from human to monster but some interlude mention about his past. Anyways, I can feel that their personality exist and not that shallow.

What to expect in the so called dungeon building?

You can expect that unlike a typical dungeon where they got to choose starting monster and build a dungeon around that. The dungeon building on this story relies on his memories and imagination making the mystery and magic inside the story intensify.

The only issue I see was the lack of consistency on uploads. I don't know if the author got some writer block or become unmotivated but I just want the author to know that some people love her story.