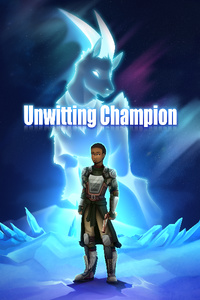 "In stories this is always easy. There's magic and powers, and quick steps to claiming that power for one's self. This doesn't feel true for me. I'm supposed to be a Champion, whatever that means, and yet I don't feel important. I don't have all the bells and whistles, which honestly feels familiar even in a new world. But what was I expecting? I haven't had the worst life - there are people with worse problems than mine - I've known what it is to struggle, to be pulled down instead of being helped up.

This is nothing new."

When in great peril, the Kingdom of Althor has no choice but to send a call into the void, beseeching the Fates to bring them a man who would save them from the coming darkness. Unfortunately the path the Fates chart is often unknowable to men and the Champion who appears is not what the kingdom expected.

Unwitting Champion is a story of a guy displaced, dealing first and foremost with trying to survive in a world where he is no longer a person but a tool, and - at least from the reaction of those around him - a shoddy one at that. His major goal is to survive long enough that either he can run or find a way home, because as exciting as the possibility of learning magic might be, he would rather have a boring life than a short life.

Unwitting Hero is an excellent contrast against the traditional neoliberal isekai fantasy that avoids the grittiness that most isekai which want to subvert the core trope use. The protagonist has been called into the other world in order to become a participant in the political landscape of a feudal alliance in response to a conflict on the western border. He distinctly doesn't want this in the same way that many other isekai protagonists don't.

While this isn't a perfect story, it is a breath of fresh air in a genre that worships the neoliberal accumulation of power in all its forms.