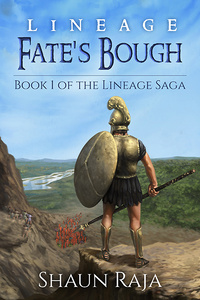 The continent of Erdenia is in flux, nations large and small move to swallow their neighbors. Roving bands of marauders pillage the countryside, and the seas are choked with piracy. Against this backdrop upon the central island of Syroneika exists the Mercan League, an alliance of city states ruled by the Archon from his seat in the Capital, Merlabria. Yet all is not well beneath the surface.

The Archon’s health is waning, while the House of Mercan appears on the verge of conflict. Both princes vie for the Archonship, with the aristocracy close behind looking to settle old scores. In the immediate west the Althai Federation is in a state of civil war, the conflict spilling over the border into the League, while nobles’ squabble over petty slights.

In this time of growing conflict, the Archon has summoned the warlord of the southern frontier, bulwark against the horrors of the dark forest, and former Grand Scholar of the court. Behind the scenes pieces are in play, and the Scholar possesses numerous enemies, many still envious of his meteoric rise to power. A simple trip to the capital may be more than it appears.

However, the branches of fate are fickle things, a single encounter could change the course of history. Or perhaps that is simply the will of fate, and nothing has changed at all, who could know? Could the meeting between a simple slave and a warlord truly be fate’s bough? And if so, where could that lead?

Do not read if:

You can join the Discord here: Lineage Discord Channel

Check out their work:  Illusstation's page 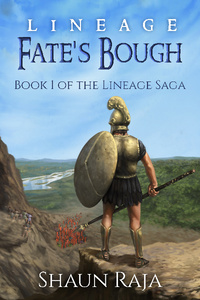 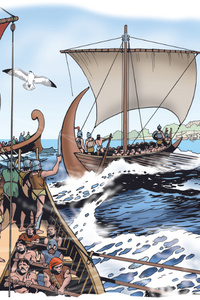 Reviewed at: Chapter 8: The Little Witch and the Amazon

Style: The prose of the story is spot on. Gives plenty of description without being too wordy. The reader gets a strong idea of what's going on, what the characters are thinking and feeling as well as an understanding of characters' positioning/movements during action scenes. Very easy to follow and understand overall and not a chore to read.

Grammar: Only a few typos here and there, and the author promptly rectifies them. Perfect score here.

Story: Despite the fantasy setting, quite a bit of historical knowledge went into creating the world. Anyone that is a fan of ancient Rome will feel quite at home (both in the story and in the comment section). The author clearly has a love for that period in history, and it is more than evident within the writing.

Character: The characters fit within the story. They act as one would except from an ancient-Roman style society. The characters are tough, stern and brutal. The concern and care for life isn't present among much of the main cast (which consists of gladiators and soldiers-for-hire), so they have no qualms with taking lives. However, that doesn't mean there isn't any compassion amongst the cast. As seen early on the story, even the most vicious of gladiators can have a soft spot.

Overall: An engaging read for anyone that is interested in ancient history. It's also very likely that you'll learn a lot just by hanging around in the comments section.

Reviewed at: B2 Chapter 7: Port Ealar

I enjoy this story very much, coupled with high number of releases make it one of my favorites stories and one that I look forward to every day. I hope that the kingdom building aspect will be as detailed as the world building.

Keep up the good work I hope to see more work from this author.

What a brilliant peice of work, well written throughout, great characters and storyline no filler chapters and a great pace, enough world building and character back stories to keep you informed without there being dry chapters/ info dumps. The world and setting is well done and no all powerful mc, well worth the read and I'm glad the author did a complete rewrite so that it's paced nicely.

Good Story , give it a try.

I have read the first version of the story which was good enough , the type of story that I usually enjoy , this version is clearly an improvement . I am eagerly waiting for the rewritten chapters to be posted so we can move on with the plot to something . As of now , I don´t have anything bad to say , it is a solid story.

Reviewed at: Chapter 13: Towards Myrmien

Overall, I love it so far! It has interesting characters and the story is captivating. The author is detailed and thorough. You can tell they put a lot of effort and thought into each chapter. I am excited to see where the story goes from here. Keep up the great work The Eternal Scholar!

It is good but

Reviewed at: ONLY 2 MORE TO GO

It is good but it feels like we are coming in to a already going story we don't know enough about the characters to get much impact from there actions and relationships over time this can be fixed when we know the characters better.

The Gladiator, The Warlord, The Scholar

Style - Story is well written, well structured, understandable and without any obvious stylistic errors, I could notice. Very slow, due to necessity to establish the original setting, but plenty of action. 5-Star review

Grammar - I'll find out what grammar is, soon, I promise! As English is not my first language, I don't judge any story by its grammar. (5-Star by default)

Story - it's a very classic fantasy story with a setting heavily inspired either by Ancient Greece or Ancient Rome. I am very hesitant to call it a fantasy as I didn't notice any supernatural elements fantasy is bound to have and would go as far as calling this an alternate history instead. The story is progressing very naturally trying to slowly build up your understanding of the completely original setting, with characters that are a natural part of the said realistic, historical setting. No RPG elements, no Portal Fantasy, bonus points for that. 5-Stars.

Characters - I think characters are actually well written, realistic, and fit into the tone and context of the setting. I should give them 5-stars as well because there is nothing wrong with that part per se, but I am not going to. Because I find them uninteresting, they are fairly mundane characters with a relatively realistic historical setting, which doesn't catch my interest.

Overall, I would suggest this story for any fans of faux historical novels where characters, places, and events are completely fictional, but otherwise operate as a historical setting would, without any supernatural flash attached to it. It would be 5-stars for them, I am certain.

Reviewed at: Chapter 37: Brother and Sister

Sweats looking at the gun. Tied to the chair looks at the paper that lies on his knees and then starts reading at loud. My completely unsolicited review of the Lineage saga story states. The characters are well-written and  world building is great. It brings the vibe of Ancient Greece where city states quarreled with each other, forgetting they are small fish in a big pond. I give it 4 stars....hears as bullets are loaded into the chambers... I GIVE IT FIVE-STAR POINTS!

Why not, clearly not bribed!

Reviewed at: ONLY 2 MORE TO GO

Great world so far, looking for more view into the supernatural part of the world, and to see how will our characters progress forward.

Grammar is a strong point of the story, but the consistent releases are even more important, but what attracted me more are the vivid descriptions of the world. Looking for more chapters down the line!

Reviewed at: Chapter 42: A Witch's time is never free

I like the world building and drafting of the characters. The realistic world without OP protagonist is author's strongest selling  point. though Battle  scenes  could  be better and i would like more grey characters.

My main issue is scholar's caravan which has not any casualties in all the clashes. They are in hostile  lands but seems like a merry bond of adventurers.