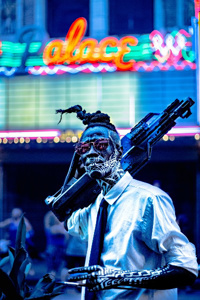 in a not too distant future, every industry dependent on non-renewable energy has collapsed along with most governments. Instead, the tech companies with their massive conglomerate empires rule.

on his 18th birthday, Joe blogs had an awkward surprise. his virtual citizenship was reset to 'child'.

With the explanation, that they thought he was test data, the computer made a mistake. Unable to fix the mistake he is left without the 18 and over veteran loyalty status. unable to go to university, get a job or even buy alcohol.

Soon, though Joe finds that this glitch allowed him more freedom than he had before, and after getting mixed up in the wrong crowd he finds himself pitting companies against each other as his stolen AI companion forces him through an adventure as he slowly finds the secrets hidden from the world.