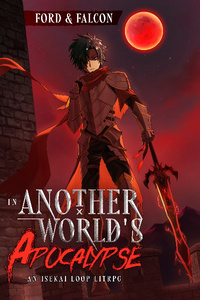 In Another World's Apocalypse - An Isekai Loop LitRPG

What was supposed to be just another day of work for Klein turned into a realm transcending delve as strange creatures and unknown system malfunctions assault him.

Sucked in by a strange cube he finds himself in an Unknown dungeon, his new adventure begins with a sword through his chest. Yet, what awaited him was not the embrace of death but a blood red notification.

It was time to start over.

In Another World's Apocalypse's Song

The characters are decent, there’s a focus on the lead
his thoughts are the narration, and aren’t too bad a read
it’s a strong to weak to strong plot, and he’s pretty smart
though his personality’s confusing at the start

The style is fine, it’s standard gamelit, not too light or dark
the blue boxes aren’t too intense, but they do hit their mark
it feels like it’s a passion project, not like polished works
but the author continues to iron out the quirks

The grammar is improving, but it does have its issues
but I think it’s good enough in many people’s views
it’s nothing immersion breaking, and that’s the main thing
and with the (UPDATED) chapters, it is improving

Only two chapters out right now(UPDATED!)

Reviewed at: Chapter Four: This Can't Be Real (UPDATED!)

edit; It now has more than two. Yes, I am just as surprised as you.

And I kinda wish there were more to read already. While, sure, we haven't actually gotten more than the(albeit great) opening, I still think I have a decent feel for how the plot is going to be unfolding.

And I want more. Jotting this down for my read later list. Likely getting back to this in a month or so. But, for the sake of including actual review parts in this review, I'll compliment the style for actually having gotten thought put into it, the grammar for having been reviewed a few times over, and for the character to actually have some sense of personality and dedication to his duties. Also, the tables are rad. 5/5 from me.

The older review sums up my general opinions about the story decently well but since this is now turning into an advanced review of the updated chapters instead, I felt it was needed if I reiterated a few of my points.

The style itself matches in with the genre-tropes that we can see with the usual Time-Loop fic. Details are put in at peculiar points, only becoming more useful as time goes by. This may seem like its done badly at the start, to a viewer not fully experienced in the tropes so often seen, yet it becomes better as the style is allowed to developed, with set-ups finally having their deserves pay-offs. Words are varied along with sentence-lenght, allowing for a reader to get through larger chunk of the story in half time without really feeling annoyed by the way it is set up.

It might not cause much problem anyway with the current length of the fiction, but anybody that decided to binge it may have seen these possible errors. Seeing as these are non-existen, along with the other greats made, I deem Style to be a 5/5

I suppose I could say a bit more about the style here, since it would make sense. As some of the newer fictions have started doing, a lot editing can be seen at points. It's where the author goes back to rewords things, make/destroy sentences, and maybe even rewrite entire parts. It's mostly for the good, allowing the text to have a clear pacing throughout its entirety. And this is done well, allowing the fiction to have a smoother flow.

But it also has a side-effect of allowing the author to spot those minor grammatical errors that so many seem to have. Never once did I have to worry about a Your/You're or There/Their/They're, which is quite rare nowadays. The shorter fics usually have one of those within the first four chapters, yet I saw none in this one. I believe this warrants another 5/5(Do note that this talks about the UPDATED chapters. Ain't saying nothing 'bout anything else :) )

This needs to be said again.  It is a time-loop. Which means time can change. What might seem like certain events can be altered alter on. While not put out up front yet, I believe it might be shown more prominently later on. It's also the reason I have the hardest time saying much here. Eveything is up for interpretation. What did the author mean with this? 'Was it truly a hint for change or am I just reading too much into it?' This showed up during my initial read of this story so long ago. Reading it again, I see where this came from. Being able to make my second-guess common tropes and then seeing it unfold spectacularly is a gift best left for the sweetest. So... 5/5 again.

This is where the critics love to draw inspiration from the gates of hell. Isnt enough to bring forth the pain but enough to know that issues will be found the moment that the first steps are taken. I won't say I am not biased on my opinions, since I am very biased, but I just couldn't get immersed into the actions. Do they make sense later on when we learn more about the MC? Yes. Did that change my views? Not really. It's hard to truly make an opinion when personal ideas about good choices and what makes sense in-characther conflicts. Giving it a 5 feels bad but a four is bad for a whole other reason. So... 4.5 I guess.  Confusion was had. Live with it.

Math is not the strong point, so overall score will not change. Any comments about this can be delivered to a empty hole. Also... opinions about plot kinda spans to the future chapters as well but whatever.

Enjoying this so far!

I liked this story!l so far!

The rewrites of the first few chapters definitely made a difference and I like how it introduces the character and how he goes into the story now better than the previous version.  Good stuff.

It's an interesting premise with a interesting world apocalypse.   I'm looking forward to what happens next!

A New Adventure Awaits a Veteran

In Another World's Apocalypse is an interesting blend of ideas that I brings together multiple ideas from different stories I've read. I can see that the author is working hard to put together an interesting story, taking feedback professionally as they come, too. While the MC is a little cocky sometimes, I enjoy the challenges he faces, forcing him to improve and overcome the new odds stacked against him.

I don't think I've read too many stories where the MC is already from a world with the System but it is otherwise modern. Feels fresh, and the writing is there, as well. Not perfect, you can't publish this shit tomorrow, but written well enough you're not working to understand what the author meant versus what he wrote.  (Reread that and realized how it sounds. I'd give the current state of their prose at 3.5-4 outta 5 but I'm not doing an advanced review right now.)

The action scense are engaging. I'm still on ther fence as to whether I find him defeating enemies significantly high-leveled than he is plausible due to his long experience as a fighter and adventurer. The explanations for why and how are fine but structurally this might be the weakest point of the storry so far and for me.

I was gratified recently when the MC pulled his head out of his ass and recalled there was a simpler way to do things. I don't mind an MC being an idiot. That's a realistic way of portraying a not-android character. Hehe.