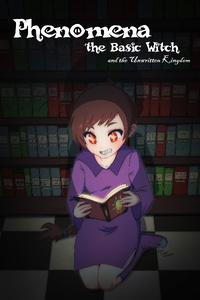 Phenomena the Basic Witch and the Unwritten Kingdom

by Pianos In The Evening Sun

Pianos In The Evening Sun

After her previous adventures in Nightdream Academy, young witch-in-training, Phenomena Willow’s first semester has quieted down, but things are ready to heat up again on the eve of a chilly winter solstice.

When gifts arrive for her and her friends, Mena’s eyes are drawn to one from her Auntie Grizabella, who had previously gone missing after a skirmish with the nefarious Anguish the Blood Siren. The gift is revealed to be an ancient book, unable to be opened by mortals. A voice cries from inside, calling from the depths of an “Unwritten Kingdom.” It tells Mena that a ghost writer has taken control of their book kingdom, throwing off the balance of the mortal world in the process. Mena and her friends are left stumped, but intent on solving the mystery that lies between the worlds.

As their new semester begins, however, a new teacher is introduced into the fold—Ms. Loreena Cumberson. Stern, strict and a busybody who teaches Magic Home Economics with an iron fist, Cumberson is flabbergasted by the flamboyant antics of Gemini the headmaster and aims to combat him and the whole school with a league of concerned magical moms.

Join Mena and her friends as they attempt to outwit Cumberson and unlock the secret world of the Unwritten Kingdom.

Pianos In The Evening Sun

In this sequel, Phenomena Willow returns for a new adventure that takes her into a literal whole new world of adventure where terror and betrayal await!

As good as the previous book and so recommended for fans of that one. It is well written, imaginative and well plotted. Looking forward to book 3!