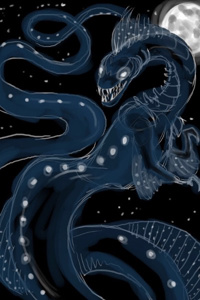 When outlander forces attacked planet earth,the solar system’s guardian spirit which most earthlings refer to as God uses the remaining of his power to seal all life forms inside a barrier.

From that point on everything became a video game,skill books levels and super powers became the common while old morals friendship and religious ideals became a joke worth nothing.

The barrier would protect them for less than 60 years,which should be enough time for earthlings to gather enough power and accumulate enough fate.

reach 100 fate in order to get granted passage to another world,work hard and conquer..survive the darkness to see the light

Cut your binding morality shackles and use every means necessary to reach enough fate or perish,from now on it was survival of the fittest.

credits for the cover: DeviantArt

Reviewed at: Inheritance of the Dragon swordsman

I am going to preface this by saying that I have nothing against the author and I think they can and will improve with time.  Sorry if this review is a bit harsh but this is my honest opinion of the novel.

Style: tells you what's happening rather than showing you.

Story: Pacing is way too fast, the MC gets everything given to him with little work and the characters are extremely loyal to him despite the fact he's got no redeeming features and is a total ass to everyone.

Character: MC- spoiled brat that went through some dark stuff but is still an annoying spoiled brat used to getting his way and is undeservingly given the power to get his way.

Maira- has been brainwashed to follow the MC despite his ever-growing number of flaws. Has no real personality other than an obsession with the MC.  Is extremely competent and would be better off without the MC.

Slaves- his slaves are treated poorly and are still obsessed with him they would all die for him etc...

Overall the characters are 1 dimensional, the MC never has to struggle for anything and the story pacing is way too fast initially.

In my opinion, the pacing is so quick it might have well been an eastern fantasy isekai. Where the MC could grant special physiques.

My unprompted, unprofessional advice to the author is to develop a few of the characters personalities especially the MC and Maria in the next ark.

For instance when he leaves to see the outside world have a few interludes where Maria is back running the base alone and gains more independence or have Dante become less of a dick when he sees he's weak in the outside world.