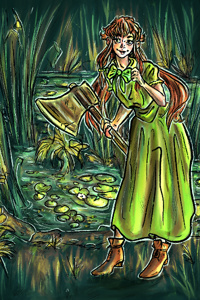 Give me my lily pad back.

The great work was underway, anybody who had worked construction and could still pick up tools was hired. Castle mages were repurposed as earth movers (despite their complaints, and you’d better believe they LOVED to complain about it.) Bulls were woken from their slumber and strapped into ground levelling harnesses, (between shifts you could see these bulls dozing everywhere, it was such a novel sight there should have been a name for it.) Teachers used the excuse of practical lessons to get the kids out of the classrooms, and hopefully make them partially someone else’s problem for a while. Channels were dug, then stone shaped into reinforcement for the edges.

The drought was far from over of course, but the additional infrastructure would at least prevent repeat performances once it was all over, and as a joke Rosalind had even placed a dedication plaque, consecrating the new waterways in the name of the Great God Wannashowa. This had caused somewhat of a stir among the clergy, who were usually quite up on these things, but seemed to be unaware of this particular deities existence. That wouldn’t do of course so an investigation was quickly ordered, and they were eventually led to a tiny shrine in the back garden of one Colonel Mustard, who was quite sick of his garden going dry, and had reasoned if the god was good enough for a royal then it should be good enough for him as well.

So the priests probed further and after many prayers learned on the divine grapevine that the princess herself was the high priestess, and that apparently offerings of tea and biccies were quite pleasing to Wannashowa. This caused some consternation amongst the assembled clergy, but eventually it was decided that who people went around becoming worshippers for was nun of their business. But a deity chosen by a Princess, and with a major piece of national infrastructure dedicated to them should probably have a suitable temple. After all if they don’t then people might start asking about why the other denominations had such large, well decorated, and extremely expensive temples made in their name, and that sort of question led to problems all by itself.

So a team was formed, and gradually shrines to Wannashowa started to manifest across the kingdom, though the priests were somewhat confused as to why the hell the statues they had made of suitably deific looking men kept changing into statues of a frog whenever the temple was empty then stuck that way. After ten or twenty attempts they had decided that the frog must be the divine messenger for the god. (After all what kind of god goes round looking like a frog? That made no sense.)

As a result of this every shrine dedicated to Wannashowa gained a decent sized ornamental pond, to the delight of the princess, who called for a large stone lillypad to be placed in the center of each, when asked no explanation was given for this. Though the princesses tendency to seat herself in the pond at the largest temple seemed to imply they were intended as some kind of meditation spot.

Thus gradually progress was made, as the seasons progressed, and Mibbet, much to her irritation remained human. She would of course miss her fluffy bed once she went back to the pond, but try as she might no progress had been made in her quest for a solution.
************************************************************************
A showdown was taking place, the defending champion a not quite as small as they used to be owl-bear, vs. the newcomer Rascal the hellcat, they had discovered the traditional weapons in their arsenal, namely cuteness, didn’t hold up so well when the beholding eye was no longer 1. a massive bloody Archdemon or 2. looking down on something that barely reached their ankle. Cuteness points were not added for either being on fire, or being a gargantuan fluffy and feathery carnivore. So they considered alternative plans.

On the plus side Rascal was no longer setting fire to half the gardens now people had made special paths for him, and a comfy little bed for him out of an old forge room. (To which Mibbet was a frequent visitor, what did you expect? Frogs like warm.) And Alba was well enough established as a princesses pet that nobody even questioned it anymore, they just considered it yet another quirk.

Redrobe was working on getting additional services out of Berk, to make up for the hellcat, but apparently it wasn’t easy, because when properly informed one of the many things hell has a lot of (alongside mime artists, people who kick the backs of theatre seats, individuals who blame the dog for their farts, people who throw things at cats, though they do get a special place reserved for them, and the usual motley array of more conventional sinners,) was lawyers. Now Redrobe had the problem that hell had a lot of those, and they often counted “please stop poking me with that bloody pitchfork for a bit” to be an acceptable substitution for billable hours.
************************************************************************
Meanwhile Prince Tyrone was rapidly learning that while he may be a great warrior, a seafarer he was not. Though to the shock, and quite possibly fear of the rest of the world he was rapidly becoming one. (The rest of the world had the common sense to come to the realisation that when an egotistical bastard, with access to armies who considers their own society a “bastion of modern civilisation,” learns to use a boat and starts visiting other lands nothing but trouble follows.)

Every once in a while he would stare at a portrait of his bride to be with a sigh and a terrifying smile.

“Lucky girl gets to marry me, I mean what an honour” he whispered to himself, his attention divided between the portrait of his chosen bride, and a handy mirror. Theoretically he was supposed to be on lookout, but they were in the middle of the ocean, what was there to look out for?

A note from Brights