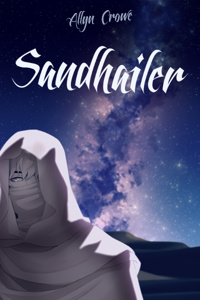 From atop the crest of a lone dune, Sandhailer took in the deceased convoy down below. A line of fallen camels bearing empty, satin howdahs laid among the sands. Slaughtered men in vermillion red uniforms were picked apart by winged scavengers. Soldiers of Yalmae, and judging by the golden details, from Jawhara itself. A tax collector?

One had to be bold to slay such an envoy. Most things would have been looted – but like the vultures he was not opposed to tearing the last useful bits off of the carnage.

He gently tipped the sailer over the top of the dune, and slid down into the crescent depth. With a quick tug he loosened the ropes that held him to the sandcraft, and hopped off. His feet were greedily embraced by the scorching grains.

With one hand on the sheathed blade at his side, secured next to a long, silver rod with two prongs, he traversed the carnage. The vultures ignored him, too busy tearing the arm off of one of the corpses. Anything of value had been removed, but here and there a pouch remained, and the rations hadn’t spoiled.

He kicked aside a lone cadaver, buried half in the gold-embroidered cloth of one of the slain camels. Corpses sometimes groaned, bloated from the desert heat, but this one managed to breathe in. The large stain on his abdomen belied he would not do so much longer.

Without hesitation he drew his khinjar: the short, faintly curved dagger. The interior was serrated to cut ropes, and he kept the blade itself sharp enough to glide through flesh. A slit throat was a mercy compared to suffering for hours – possibly days.

He kicked the cloth aside, and knelt over the man. Half his face was red, boiled by the sun. Judging by the severity, he had to have been there for the entire morning, if not the day before. If so, it was a miracle he lived through the night.

With a firm grasp on the top of his turban, he pulled the head back. He raised his dagger, judging where to slash to sever the jugular. The man's breaths hastened. Feverish words were muttered, but not to him.

He watched the delusion with pity, and knew better than to listen. He shut his eyes and gripped the knife. He was doing a favour – more than any of these soldiers would ever do for a desert-crawler like him.

But he couldn’t do it.

Instead he cut the fabric around the soldier's waist. A thin, dark red stab wound pierced his gut, right above the navel. The surrounding skin was red, against surprisingly pale tones for a Yalmae-born. He still bore the telling olive hue, and no foreigners would be born into the warrior class: certainly not this rank.

He turned the man's face to take a closer look. Even when flushed from heat, he could say with certainty that he was no older than twenty-five. Inexperienced too, considering that he was barely tanned, bore no scars, nor wrinkles from the sun around his eyes. It was a handsome face.

Sandhailer scoffed; a high officer's son, no doubt. No trained man would be so unblemished. It made him wonder if he shouldn't slit his throat out of principle.

He sheathed his khinjar, and grabbed the man's wrist. Despite being a head taller than him, the soldier was slender. Which further proved he had no place being a guard of any sort. But he was still alive, and if he did not improve by the next sunrise he could sever an artery and toss him aside.

He laid the man on the platform in the centre of the sailer, out of the sun. Using cloth from the cloak of a nearby deceased soldier he tied the man to the wood by his arms and legs. That way he would not attack him in his feverish state – or fall off.

With a pop he loosened his waterskin, and pressed the last of the gathered cloth against it until it was damp without wasting any of the precious liquid. In an attempt to keep the sunburn cooled, he stuffed the edges of the wet fabric in the man's turban and head covering.

The wound required more attention. From his scarce supplies he retrieved a small flask of clear liquid, a jar of honey, and clean bandages. He uncorked the small flask. With one thumb he pulled the wound open slightly. The pressure against the edges of the wound caused a sickly, yellow pus to drip from the gash. It stained the tips of his gloves. However, the veil in front of his mouth and nose protected him enough that he did not recoil from the stench.

Begrudgingly he wiped the pus away best he could with scavenged cloth, squeezing it out until finally blood trickled from the wound. The man groaned in pain, and mumbled inaudibly. He continued regardless.

Pulling the wound open again, he kept his thumb over the opening of the waterskin and slowly began dripping water to clean it out. It was deep, and he was unsure how far the infection ran – but he would not risk digging in a man's abdomen.

When the cut was clean enough, he tipped over the small flask. The clear liquid bubbled on the wound. The man suddenly jolted and screamed. Immediately the vultures took to the sky. Sandhailer pushed his hand over the man's mouth.

"Silent." He growled, well aware of what things roamed the desert – and even more afraid of the things he was not aware of.

The soldier convulsed, crying out repeatedly but hushed by his firm grip. After a few moments, which felt like aeons, the bubbling lessened. Pained whimpers escaped the man. He did not care, but did remove his hand so he could breathe.

Lastly he drenched the wound in honey, ensuring it was covered entirely. Surely there were better salves for such purposes – but he could not eat salve. He wound bandages tight around the man's abdomen, pulling at them firmly until it did not give any more. Rapidly he secured the dressing, tying a quick and neat knot.

It had to do: he would not waste any more materials on a life that undoubtedly would end his without a second thought.