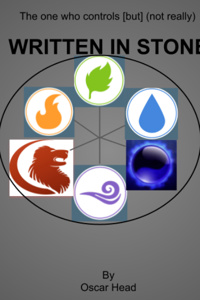 We were in the alchemy room leaning against the wall farthest from the door, as I moved around trying to get this spot where there was no brick. No brick!!! I thought to myself I reached where there was no brick and my hand went right through the wall! “Guys i found something.” I said then I wiggled my hand around as everyone crowded around me. I felt a little thing like a handle that is on the back of a shovel then without thinking, I pulled it. The room started to rotate then a door appeared “quickly, run through the door!” i said to the others. We ran through the doors just as the wall closed behind us. We ran straight to the hall straight in front of us when Gunnar yelled “stop!”

Then he turned to shadow and ran down the hall we heard a bunch of noises including a ‘shing!’ and a ‘thud!’ then Gunnar emerged from the darkness “its safe now, i set off all the traps” he said we all drew our weapons, I drew my crossbow and Taylor drew her spear Gunnar drew an ax while Kale drew his trident. I ran to the next room and I saw Carson and Skylar drew there weapons which were swords and twin bowie knives. Then as we rushed into the room In heard a hiss “Duck!!!” I yelled as I realized it was a dart. Then everything went black, i had no idea how bad things could get.