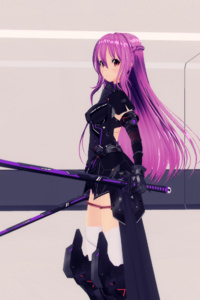 After crashing on a zombie-infested world, raised by the forgotten machines of the past; Flow spends her days scavenging the ruins of the colony in order to construct the ship that would take her far away from the rotting ruins. After an encounter with an unknown and hostile alien race known as fiends, Flow stumbles into a strange vault buried below the colony. Then, accidentally, she awakens an ancient android with no knowledge of herself, fulled only by the desire to destroy the fiends.

So begins the intergalactic journey to find the Aigis and continue the androids mission, to complete Code Scarlet.