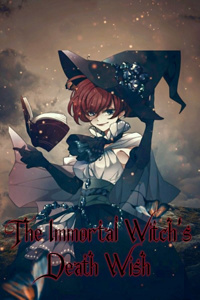 In this world, one must realize that we are not born equal. Intrinsically, the value of each individual being is unquantifiable. However, when we are born, we are born in many varying positions- sometimes at the bottom, sometimes at the top. Thus, we strive to reach a higher place in life. Though try as we may, we must realize our lack of equality. Only in death, are we truly equal. The young, the old, the rich, the poor, the humans, the animals, sane and insane, all find equality in death. This inescapable law, allows all of us to reach the same destination.

So what can be said of someone who cannot die…? Surely, they’d never be able to rest, they’d carry on about their life attempting to reach that end point that they were robbed of.

To live opposite of humanity, with just one single wish in their heart. This wish can be heard from the bottom of their heart:

This book is one centered around an overpowered witch who, as the title suggests, only wish to die. The MC is not intended to be a good character, and may often times be perceived as a villain. Heavily influenced by an anime style of writing. For those who love Overlord, Tanya The Terrible, Re:Zero or even my previous novel Plague Children, this light novel is for you.

I Think I've Read This Before

This appears to be a re-upload of a story I read quite some time ago.  Clearly, I didn't get too far and, having re-read the first ten chapters, I'm jumping off the train again.

The grammar is functionally flawless and the writing style is relatively good if sometimes long-winded.  There are however a series of major flaws that just leave me scratching my head and ruin the entertainment of the story.

First, the protagonist's personality doesn't seem to be well-thought out.  Ostensibly, she cannot die and, having suffered for millenia as a result, now only seeks to do so. I can accept that as a premise for a character, but then the way their personality is shaped should reflect something so fundamental.  Mortal characters act in many ways because they do not want to die or they do not want others to die. With that gone here, the protagonist should act very differently, and yet she continues to act in many ways consistent with a fear of death.

The second bit is the series of decisions made by secondary characters that lead to the battle circa chapter 10. There really seems to be no decisionmaking standards to the city's visitor policy other than, "Oh, this powerful person is mysterious.  Let's kill her."  This happens at least twice, perhaps thrice, and is only reinforced when (after the first attempted death), the secondary character comments that they'll have to fill out the paperwork for her death, but seems unbothered that it was a mistake to kill her. Even assuming that such a brutal policy towards visitors to the city is justified, there surely ought to be a release clause for cost of killing the visitor versus the benefit to do so. There isn't though so, in their arrogance, bodies just keep getting thrown at the problem until their are no more bodies and only the problem.