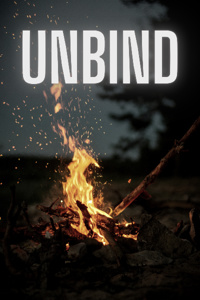 There is no rhyme or reason to the flow of life.

Cora knows this better than anyone, a normal suburban girl living on the edge of a major city. So when she gets ripped out of Earth and dumped into a new world, she will do anything to return. But as she wanders through worlds and becomes part of a system unimaginably greater than herself, she realizes that returning home isn’t as simple as it seems...

The warning tags are added because there is a high potential of the content warned about occurring in several chapters. They are not meant to be the explicit focus of Unbind, but they will be recurring elements, albeit with scarce frequency. As a warning, there will be a note added before a chapter should it contain mature content.

Updates will be posted every Sunday. As a fledgling writer, I appreciate any commentary!

This is an early review, at chapter four, but there's some quality here that I feel would do well with attention.

Style:  The style is straight up classic fantasy, in an early professional way.  The style is great.  The author clearly has a lot of experience at the least reading fantasy.  There's an early broader view, which contracts to a narrow view from characters connected to the broad situation.  The second chapter should be expanded, or attached to the third as an italic pre-text, I think.

Story:  It is a bit early, obviously, but the author has set up a few story threads - Cora's box, Cora and Liam's shared past and past world, and their current world.  There's not really enough information yet to know more than that.

Grammar:  I will first note that the grammar is 95% from a proper-grammar-and-word perspective.  There are very mild errors a few times a chapter.  For an amateur author writing for free, without an editor, on this site, I award five stars.  I originally dropped this a star because the story is written in third-person present tense, which is... rare.  After chatting with the author, I see that this is intentional, rather than a mistake made through inexperience, so I'll plop that star back in until we see how it goes.  Note:  Third-person, present tense is rare, but not necessarily bad.  For an example of present tense done well, read "All Quiet on the Western Front."

Character:  At this point, Liam has more character development than Cora, and that's fine.  It's too early to truly nail down characters, so I'm plopping a four stars.  That means that I'm pleased with the characters so far, given the relatively limited words posted.  Given that there are basically three chapters, I have an idea of the mindset and motivation of both Cora and Liam, so that's really good.