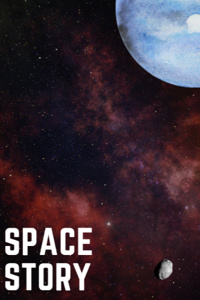 "This way, please," Andrea instructed. She glanced his way, unmoving.

"I've already called for him. He should arrive in only a few minutes." At that she nodded and followed him down the hallway, up a staircase and into the blue wing of the manor.

The blue wing was much smaller than the red wing had been, and while the colors of the red wing had ranged only from maroon to burgundy, the blue wing featured a much more diverse palette. The walls were decorated in a spiraling gradient that extended the length of the hall, so that near the staircase where she stood the walls were a deep indigo, while at the far end of the hall the walls were a pale blue. Much like in the red wing, the walls were covered in fine art, so expertly selected that it was difficult to discern at what point one shade of blue had transitioned to another shade. The only exception to this gradient was a tall window at the lighter end of the hall which the dark of the night of the crept in defiance of the décor of the mansion. Andrea scoffed and walked swiftly toward the end of the long hall. When he reached the window he jerked its sky blue curtains closed, before swiveling on his heels to face her. He opened an ornate door on his right, the last room in the entire hall.

"This will be your room," he said with a slight bow. She stepped past him into the room, which was completely dark save for the glow of cartoonish celestial bodies inset into the ceiling. Andrea slipped into the darkness behind her, turning a knob on the wall. The entire ceiling gradually lit up a bright blue, with depictions of clouds glowing where the stars had been before. The room was distinctly hexagonal, centered around a huge bed off the wall opposite the doorway, flanked by a night table and a lamp. Her bags were already sitting on top of it. On the left walls were various pieces of ancient wood furniture: a bookshelf, a chest, a dresser, and a tall mirror. To the right of the bed the only piece of furniture was a huge desk, facing a window of equal proportions whose curtains were drawn for the night. The rest of the walls depicted wilderness scenes, flowery fields and dark forests. She took in the entire room in a moment and then turned toward Andrea.

"Wait outside until the doctor arrives." He left with a nod, closing the door behind himself. She stepped toward the door and locked it, then turned the strange silver dial that controlled the lights; as she did an artificial sun wheeled overhead and the lighting gradually transitioned from day to night, complete with the golden hues of the setting sun. She turned the dial backwards and she watched it all occur again in reverse, settling finally on an evening scene. After that she pushed her bags off of the bed and lied down, lost in thought until there came a soft knock at the door. She sat up.

"The doctor is here to see you," came Andrea's muffled reply. She stood.

"Send him in." The door opened and a tan, balding man of about sixty entered. He paused upon entry to look at the colored ceiling before remarking in Mandarin with a smile. After a moment of silence his smile faded.

"Do you understand me now?" he asked.

"Good, good." He stepped closer, setting his briefcase on the corner of the bed. "So, where are you from?"

"That far, hm? What brings you all the way out here?" He asked, pulling the studded leather chair away from the desk.

"I'd rather not talk about it," she answered, attempting futilely to sound polite.

"Very well," he answered calmly. He sat, and gestured for her to do the same. Pulling a clipboard from his briefcase he pushed up his glasses and continued. "My name is Dr. Maer; may I have your name?"

"I'd prefer not to say." The doctor glanced towards Andrea at the door. She did the same, and the servant clumsily stepped into the hall and pulled the door shut.

"My left arm is broken." His eyebrows raised above the thin golden rims of his glasses. He swiftly scribbled something onto the clipboard and pushed his glasses up again.

"How did that happen?" She slightly squinted at him. "Very well," he said, swallowing. "May I see your arm?" She nodded, holding the limb forward and gingerly lifting her tight black sleeve. Her arm was bruised a cosmic purple from above the elbow to the wrist and terribly, terribly swollen. The doctor sucked in through his teeth then met her eyes and managed a smile.

"I would strongly advise that you accompany me to the hospital. I need to take an x-ray of your arm, and a blood test." After a moment she nodded. "Andrea!" he called. The door immediately opened.

"Get some ice for her arm and some servants, and inform Busco that we'll be going to the hospital for at least today and tomorrow." In an instant Andrea disappeared out of the doorway.

"Wait," she called. Andrea returned as quickly as he had vanished. "I don't want to worry Busco over this."

"Very well, whatever, just get the ice and the servants then." The doctor gestured dismissively. Andrea closed the door as he left. "In the meantime, I think it'd be best if you took a painkiller. Are you allergic to anything?"

"Such confidence," he remarked with a smile, producing a small red bottle from his briefcase. She smiled as well, momentarily infected by his enthusiasm. But her smile faded as she looked into the briefcase, spying a clear syringe. She lightly scratched at her upper arm and swallowed.

"Would you happen to have morphine?" The doctor scoffed, focusing on opening the pill bottle.

"Morphine? No, of course not. Hold out your hand."

"Of course," she repeated softly. The pill was small and flavorless.